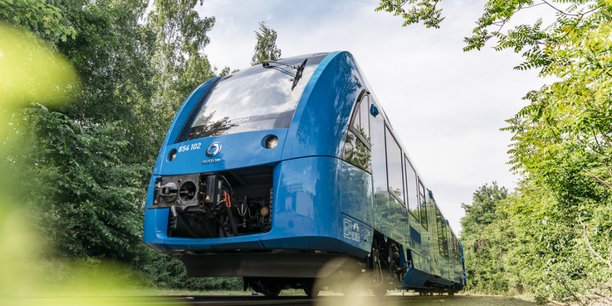 The SNCF wants to put an end to its old diesel locomotives, which burn millions of liters of diesel annually, and has set 2035 as the horizon for the total decarbonisation of its trains across the entire network of its rail network.

Two French manufacturers have just announced an alliance that will help the incumbent rail operator meet its schedule.

Rail manufacturer Alstom and the energy company Engie announced on Wednesday that they have signed a partnership to develop powerful freight locomotives powered by a hydrogen fuel cell. They explained in their press release how they plan to divide the tasks in this project which aims to: to put “hydrogen at the heart of rail decarbonization”†

Engie and Alstom are committed to decarbonising heavy mobility

On the one hand, the railway manufacturer Alstom, pioneer in hydrogen powered equipment, will design a hydrogen motorization solution based on a system of high-power fuel cells (it involves pulling 2,000 tons of trains) to power the electric locomotives. With an autonomy of a few hundred kilometers, these fuel cells will have the task of replacing diesel in the non-electrified parts of the rail network, which, according to studies by Alstom and its partners, represents 15 to 20% of a journey.

On the other hand, the energy company Engie will produce renewable hydrogen to power these powerful locomotives. Renewable or “green” hydrogen, ie produced without the use of fossil fuels. Engie plans to develop a renewable hydrogen production capacity of 4 GW by 2030, 700 km of dedicated hydrogen networks and 1 TWh of storage capacity, not to mention managingmore than 100 charging stations.

The two manufacturers had already collaborated in March 2020 on the success of a test in the Netherlands with a Coradia iLint light regional passenger train, in which renewable hydrogen was used to charge the train.

Alstom is already marketing passenger trains that run on hydrogen: 41 trains have been ordered by two German Länder and experiments have taken place in Austria, the Netherlands (with Engie), Poland, Sweden and France.

In France, it concerned the order that the SNCF placed with Alstom in April 2021 regional dual-mode trains, light, suitable to run under overhead lines in electric traction and in hydrogen mode, without pollution. Called Régiolis H2, these 12 TERs, which are scheduled to enter service in 2025 (with first tests in late 2023, early 2024), have a range of up to 600 km on non-electrified lines.

“The idea is to optimize the use of existing electric locomotives and kill diesel somewhere, to avoid the consumption of millions of liters per year for freight,” Raphaël Bernardelli, vice president, told AFP. from Alstom. “There is a desire to double the share of the track: this must be accompanied by total decarbonisation,” he emphasized.

Alstom is now committed to decarbonising heavy mobility and aims to commission its future high-performance fuel cell locomotives by the end of 2025, while SNCF promises the end of diesel by 2035, and Deutsche Bahn by 2040. and Australian operators are also working on similar freight solutions.

In turn, Engie is counting on this new application to strengthen the position of hydrogen in heavy transport, which it is developing with trucks in mining, among other things.

“We have installed significant renewable capacities. Tomorrow, demand will be driven by usage in a more significant and correlated way,” underlined Sébastien Arbola, deputy director of Engie, responsible for thermal production, hydrogen and energy supply.

The development of this solution will mainly be entrusted to French sites, such as Belfort, Tarbes or Aix-en-Provence. Alstom is one of 15 manufacturers pre-selected by the French government to benefit from government support under the European PIIEC programs to support breakthrough technologies (such as hydrogen) and research.

But the French market is not the only one that the Alstom-Engie alliance focuses on: because, if their partnership aims to provide a zero-emission solution for the transport of goods and passengers that makes it possible to comply with climate, environmental and public health, including on secondary lines and non-electrified branch lines, their target market extends to all major European freight transport countries, the two groups say in their press release.