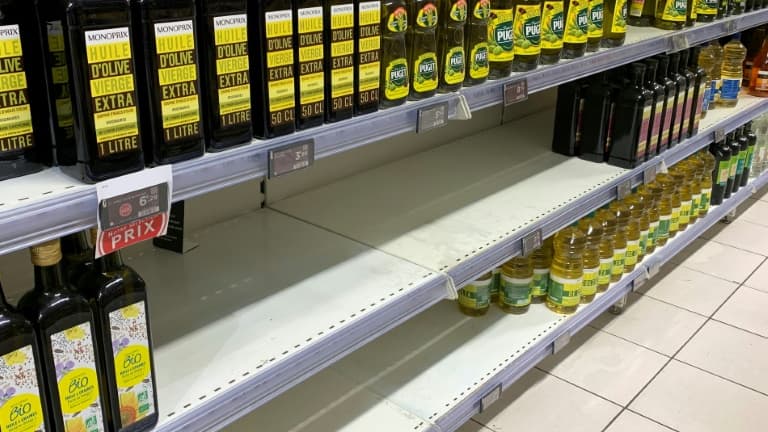 With the return of rising prices in supermarkets, French consumption experiences major shocks, with purchases of products falling sharply and others jumping.

The shock of inflation is beginning to affect consumption. While supermarket price increases have reached levels not seen in 14 years, consumers have already begun to change their habits.

And they have not waited for the current price increase. From February the Credoc noted that almost half of consumers had already started slowing down costs. For example, 48% of the French assured that they intended to reduce their spending, compared to just 34% in July 2021. In the less well-off categories, this share even reached a record level of 69%.

Fewer pleasure purchases, less clothing, fewer restaurants, but also unprecedented arbitrage on the shelves. With a first symbolic victim: organic. After years of steady growth, the sale of products from organic farming has been showing costs for several months now. According to Iri, organic sales decreased by 6.6% in the first quarter of 2022 compared to the same period last year. In comparison, conventional products fell by 1.6% over the same period.

Still in the food department, it is frozen products that suffer most from the phenomenon of deconsumption. While frozen meat is one of the products with the highest price increase at the moment (+11.3% in April), consumers are turning away from the entire section. According to Iri, the turnover of frozen products fell by 5.3% at the end of April.

Even more surprising, consumers have sharply reduced their spending on hygiene products in recent weeks. At the end of April, the entire department recorded a spectacular drop in turnover of 7%. A tumble that is mainly explained by the massive discontinuation of purchases of masks, gels and other self-tests (the comparison is made with the same week of 2021). But it’s not the only reason. Hand and lip care also fell sharply (-30% at the end of April) as did… toothbrushes (-29%).

In contrast, some products registered sales spikes rarely seen in supermarkets. This is the case for flour, which, despite a price increase of 11%, recorded a turnover increase of almost 36% at the end of April. This is a direct consequence of the current situation. Consumers are stockpiling this product en masse, fearing future shortages due to the conflict in Ukraine. Precautionary purchases accentuated by the media spread of increasingly scarce shelves.

Ditto with the oils that have disappeared from the shelves of most French supermarkets for several weeks. The shortage of sunflowers from Ukraine in early April resulted in an over-purchase of vegetable oils during the month (peanuts, rapeseed, etc.) and the shelves are now empty. In some regions, it is olive oil that serves as a substitute, but across the country the switch has been made to deep-frying fats. This small category of products (less than EUR 32 million in 2021) saw its turnover increase by 89% in the last week of April. if the French have given up on certain pleasures, fries don’t seem to be on the offering program.