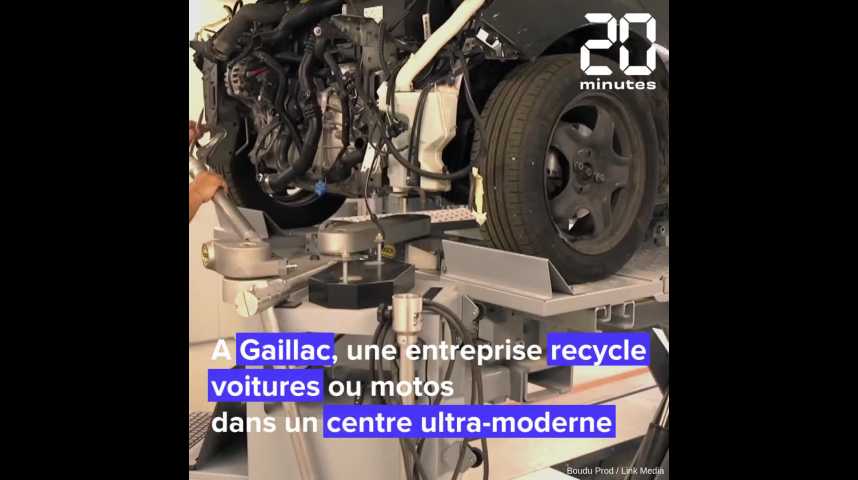 Cars as far as the eye can see, but also buses, tractors, trucks, RVs and even combine harvesters. You imagine yourself at a car manufacturer or a dealership. But on closer inspection, these vehicles are sometimes a bit, even outright stamped. Even if others don’t have a scratch. These can be reconditioned with used spare parts and put back on sale. This is sometimes the case in this company of to recycle ultramodern located in Gaillac, in the Tarn.

Far from the image of traditional junkyards, the Surplus recycling group decided to develop a real industrial complex where the smell of grease has almost disappeared. Here, on an area of ​​30 hectares, every year the 24.000 end-of-life vehicles purchased from insurance companies or recovered from private individuals. Often on the chain. If a mechanic takes two hours to get out and dissect a drivetrain, it takes less than half an hour in these workshops. “We have automated as much as possible to be as efficient as possible,” explains Laurent Hérail, the founding president of the group that has just inaugurated the expansion of its site, capable of managing 35,000 cars per year.

This self-taught artist understood well before the raw materials crisis the importance of recovering dashboards, oils, but also electrical components to “reuse them instead of throwing them away”. “Our core business is spare parts. We recover them to give them a second life, we certify them and sell them to private individuals but also to professionals. Everything that is not overhauled goes to crushers, about 1,000 tons per month. This means that we have a recycling rate of 95% of the weight of the vehicle, which is important if we compare it, for example, with household appliances, which is far from such a result,” assures this boss who employs 183 people today.

An answer to delivery problems

On average, about twenty parts will integrate the second-hand circuit on each car and this will be sold on an online site to individuals and professionals. They are chosen because they are in good condition, or because they meet the demand.

On the motorcycle market, which has many enthusiasts, 30 to 35 spare parts are found. “But we are a long way from the Scandinavian countries, Italy or Spain, where it is a culture and where 40 to 50 parts of a vehicle will be reused. There, second-hand spare parts represent 20% of the spare parts market, in the United States 25%, while in France it is only 4%,” regrets Benjamin Hérail, who ensures the general management of the group.

Since 2017, however, mechanics can offer their customers the choice between new or used parts. If buyers have hesitated for years to choose second-hand, the delivery problems, especially of electronic components, the tendency to “green” but also the price, 50 to 70% cheaper, can change.

If we know that more than 1.4 million so-called end-of-life vehicles are demolished every year, that offers prospects for recyclers. In Gaillac, far from being limited to spare parts, the company now overhauls 2,400 cars each year, which are put back up for sale with almost 30% recycled parts. And a new subsidiary is being established to determine how the batteries of electric vehicles can be reused in the future. Instead of being thrown away and polluting.