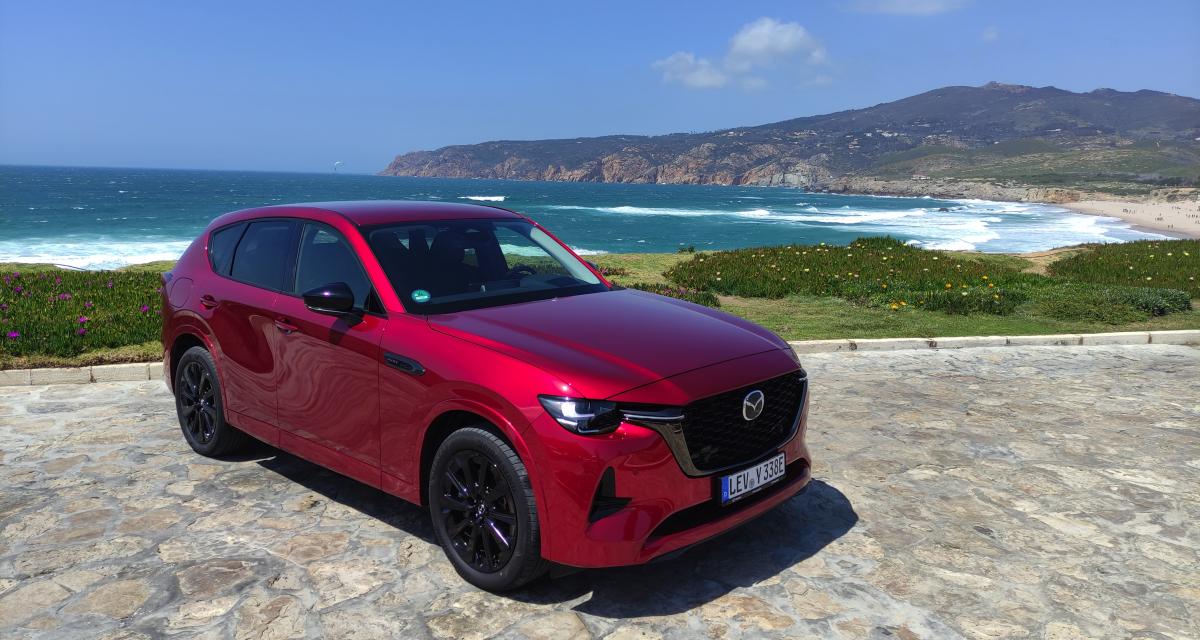 To be completely transparent, we tested this CX-60 in the hands for just 3 hours, on board models that are still considered pre-series, which will require some additional adjustments.

Technically mainly because it was shown to us aesthetically in its final version. Designed according to the latest inspiration from the Kodo style code, the SUV’s pencil strokes are also christened with the new “Noble Toughness” concept, embodied by lines sometimes intersected with a katana, while seeking a certain fluidity. curved, contrasting with an unusual, ultra-vertical front.

A prejudice that will have its supporters and opponents, for sure. And if the CX-60 is sometimes a bit “weird” in photos, it is one of those models that is more attractive in real life than in the photo in our eyes, which imposes a size (4.74 m long, 1.89 m wide and 1.67 m high) comparable to, for example, a BMW X3 or a Volvo XC60. The CX-60 is also only offered in 18 or 20 inch sizes.

Takumi better than the others?

Stepping into a Mazda has always been natural and the cockpit/cocoon effect can be found on the steering wheel of the CX-60, with an ideal driving position. Mazda is casually innovating here with the Driver Personalization System. After entering the height and making a few head movements for the camera that also detects drowsiness, the SUV will automatically adjust the seats, steering wheel, mirrors and head-up display for a customized position. In fact, because we are all different, some micro-adjustments still seemed necessary to us, but the vehicle suggests a satisfactory base position.

The digital handset is very successful, with highly inspired changing animations and atmospheres depending on the driving mode chosen. The 12-inch central screen can only be manipulated via the shuttle and cannot be felt. Mazda on the principle that it is safer to handle it while driving. Many will appreciate the gigantic font size of the interface’s various menus, so very readable.

Our Exclusive-line finish with Comfort option blew hot and cold. The very stylized gearbox controls, the leather and the topstitching are of high quality, but they are missing from the whole dashboard, preferring foam plastic of course, but with a very thick grain that is not really trendy anymore. Also the inserts, with mesh patterns, show a rather ordinary rendering. The contrast is stark with the much more inspired, light Takumi finish, with a combination of maple wood inserts and kimono-inspired chunky knit fabric. A pair of widely spaced stitching has been applied to the dashboard this time, giving the CX-60 a truly unique character.

The non-leakage design of the rear section offers plenty of room for passengers, both head and knees, and they will benefit from 2 USB-C ports and a 220V socket, which we always wonder why it doesn’t have. is not yet generalized because it is convenient to charge larger than a simple smartphone.

After opening the tailgate with hands-free operation (optional), 570 liters emerge from the boot, with a small additional compartmentalized space under the floor. All with modularity supported by the always very practical side pull tabs to independently fold down the seats of a 40/20/40 bench seat.

Mazda placed the 141 kW 2.5 Skyactiv-G 4-cylinder naturally aspirated engine in a cascade (in the longitudinal position, which is quite rare!), then a 100 kW electric motor, all connected at the end of the chain to an automatic gearbox with 8 reports.

The combined power reaches 327 hp for 500 Nm of torque, it’s generous, but it takes no less to propel this big 2-ton baby. The 0 to 100 km/h is done in 5.8 seconds, so that the CX-60 can also overtake quickly without being lightning fast.

Our route, around and through the Sintra-Cascais Natural Park, was quite hilly, justifying our electric autonomy which was almost 40 km, rather far from the official 63 km. In addition, the thermal/electrical management strategy tends to roll silently, even on steep hills. For example, demonstrating that no predictive technology is associated with navigation. The Mi-Drive button allows you to change the driving modes: Normal, Sport, EV and Off Road, as the CX-60 PHEV has four-wheel drive. An additional key makes it possible to force charging, which we tested, with consumption increasing from 1.5 l/100 km (as long as there was battery) to 6.5 l/100 km, after 30 km of electric range. have recovered with a high capacity 17.8 kWh battery. Quite an effective forced charging speed, even if it is always better to find a charging point instead of using this feature while driving.

Note that between this year and next year the CX-60 will also be available in a 6-cylinder in-line diesel and petrol version, with light hybridisation.

As a continuous Sport mode

A typing immediately hits the steering wheel of the CX-60, the steering. Mazda wanted it firm, with great precision in dynamic driving, but gets a bit too physical in normal driving mode and in maneuvers. For this last exercise, Mazda offers a very practical See-Through View feature, which displays the front and side views on the central screen, somewhat like a bumper view, so you can park in forward gear. everything that happens on the wheels.

Also in favor of dynamism, but more at the expense of comfort, the SUV is stiff typed in damping, allowing passages in bends almost without rolling. On the other hand, the CX-60 gets relatively uncomfortable on speed bumps and notches. The new Kinematic Posture Control system helps a bit though, with the action to reduce the effects of pitching on large obstacles, which still exist, but instead of rocking back and forth, the system adjusts this effect for a move vertically synchronized this time on both axes at the same time.

The technical choice to opt for an automatic with multi-disc clutch is relevant, in any case no noisy CVT, but a smoother and quieter ride. However, which will not be enough to offer responsiveness in sport and manual mode worthy of the name. A lesser evil, the CX-60 is no Audi SQ3 either. According to Mazda, this box also has the merit of reducing consumption by 22% compared to the previous BVA6.

Ultimately, the CX-60 shows itself as a model whose prejudices have to be accepted.

A certain style, a solid road type, an interior atmosphere that shows a real singularity at its highest finish. When accepted, the CX-60 thus becomes a model with a certain character, which not only imitates the competition.

On the other hand, it is difficult to accept these imposed choices regarding its prices, of course Mazda always generously equips its models from the first trim level, but it will still be necessary to pay the whopping 52,000 euros for the entry level level and up to 70,000 euros to take advantage of everything the CX-60 has to offer.

Even if Mazda is rightly convinced that there is still potential for thermal engines, the manufacturer must nevertheless play the game of electrification. The MX-30 paved the way for 100% EV models from the Japanese, now it’s the turn of the CX-60 to inaugurate its 100% internal rechargeable hybrid technology for the first time in the European market. To mark the occasion a little more, Mazda has installed a few new refinements onboard the CX-60, in addition to opting for an unusual, if very divisive, style.