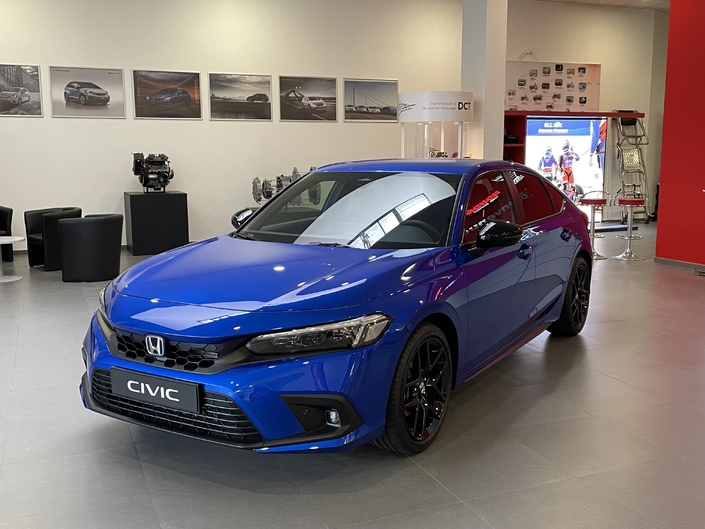 The civil is an essential model. Since its inception, more than 27 million copies have been sold worldwide and almost 200,000 in France in a span of 50 years. Growing steadily over the years, it has gone from a city car to a sedan, halfway between a compact and a family. Today the 11th generation comes to us.

Completely new, this new Civic shares some points of similarity with the current one. So it is still a hatchback, but it has many specific features: the bonnet, which benefits from a simpler design with fewer ribs, is lowered by 25 mm at the sides, making it more horizontal, the grille becomes wider but thinner. The headlamps remain generous in size and have a new light signature in the form of hooks.

The aim of this new Civic is to be dynamic but also sober – both aesthetically and mechanically. It is therefore characterized by certain details, such as the body line that extends over the entire length of the vehicle and especially the rear part, which gives it the false look of coupé sedans. Visual effect related to the lights giving the impression of being one with the third stop sign creating a light strip, but this is not the case.

The dimensions are still a secret but the length should be around 4.60 m. The glass area increases while the height of the tailgate, now in composite, is increased by 50 mm. is reduced

Inside, the Civic revolutionizes. Gone is the complex dashboard of the previous one, it now clearly shows simple, very horizontal lines, directly inspired by that of the last HR-V. Facing the driver, the 10.2-inch instrumentation can be digital (only with the high Advanced finish) and the multimedia touchscreen measures 9 inches. Unlike other brands, Honda has not succumbed to the all-digital mode, as certain controls, such as the air conditioning, remain physical. The originality of this Civic comes from the vents that run the width of the board, hidden behind a honeycomb grille. Aesthetically, the whole is a success and that also applies to the quality of the materials and the assembly.

Even if the official values ​​are not yet known, the rear space and cargo volume promise to be generous.

In the rear, thanks to a wheelbase that has been increased by 35 mm, the Civic offers a lot of space, both for legroom and headroom, preferably for two passengers thanks to a voluminous tunnel. The currently unknown trunk volume promises to be generous and of the same kind as the old one, which had one of 478 liters.

This new Civic will only be available as a hybrid. No petrol and even less diesel. Under the hood is a new direct injection engine with a 2.0 liter Atkinson cycle. This is associated with two electric motors, which are used in priority to propel the car forward, with the combustion engine only intervening at the highest speeds. The maximum cumulative power is 135 kW or 184 hp, and the torque reaches 315 Nm. Pending approval, Honda announces promising fuel economy and CO2 emissions at less than 5 litres/100 and 110 g. The most athletic will wait a few more months before discovering the Type R, the sports version.

This new Civic will go on sale next fall. The price is not yet known at this time and will be revealed in June. Meanwhile, Honda’s new compact makes its first official appearance at the Lyon show, which opens its doors today.