Home » We tried the Gen.Travel, VW’s concept car that wants to replace the plane 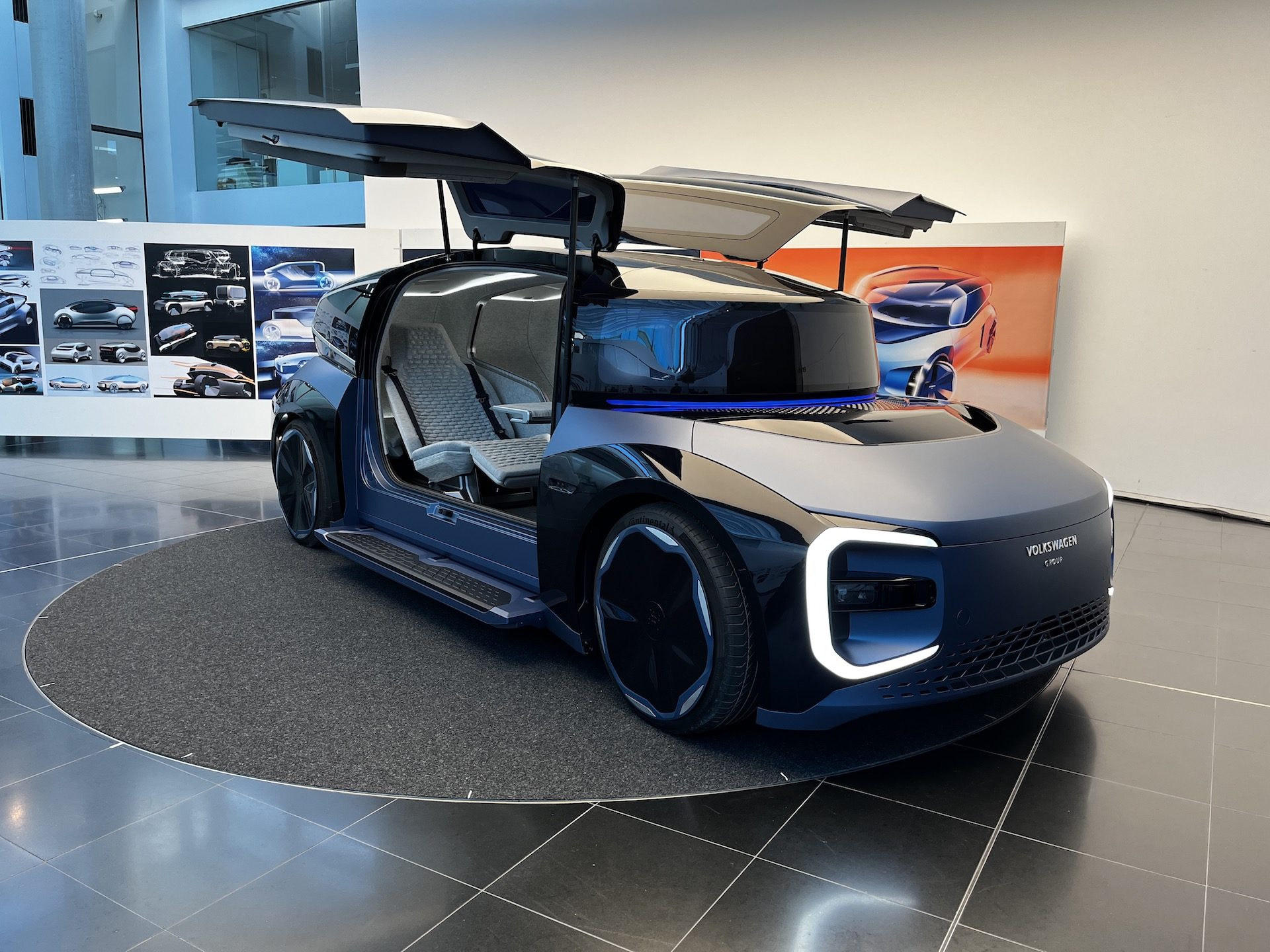 VW has unveiled a very special concept car. We went to the Gen.Travel, where it was born in the design studio of the German group.

In cars, concept cars are often seen as an outlet for designers or a place of infinite imagination for engineers. But certain concepts make it possible to go beyond aesthetic or mechanical considerations. They question car practice and our way of inventing the personal car. This is the case with the Volkswagen group’s Gen.Travel, a style study unveiled as a world premiere at the Chantilly Concours d’Élégance and which serves as the basis for reflection by the German group for the autonomous car from the future. Electric, autonomous, flexible on demand and available in carsharing for long journeys, these are essentially the hallmarks of the VW concept. 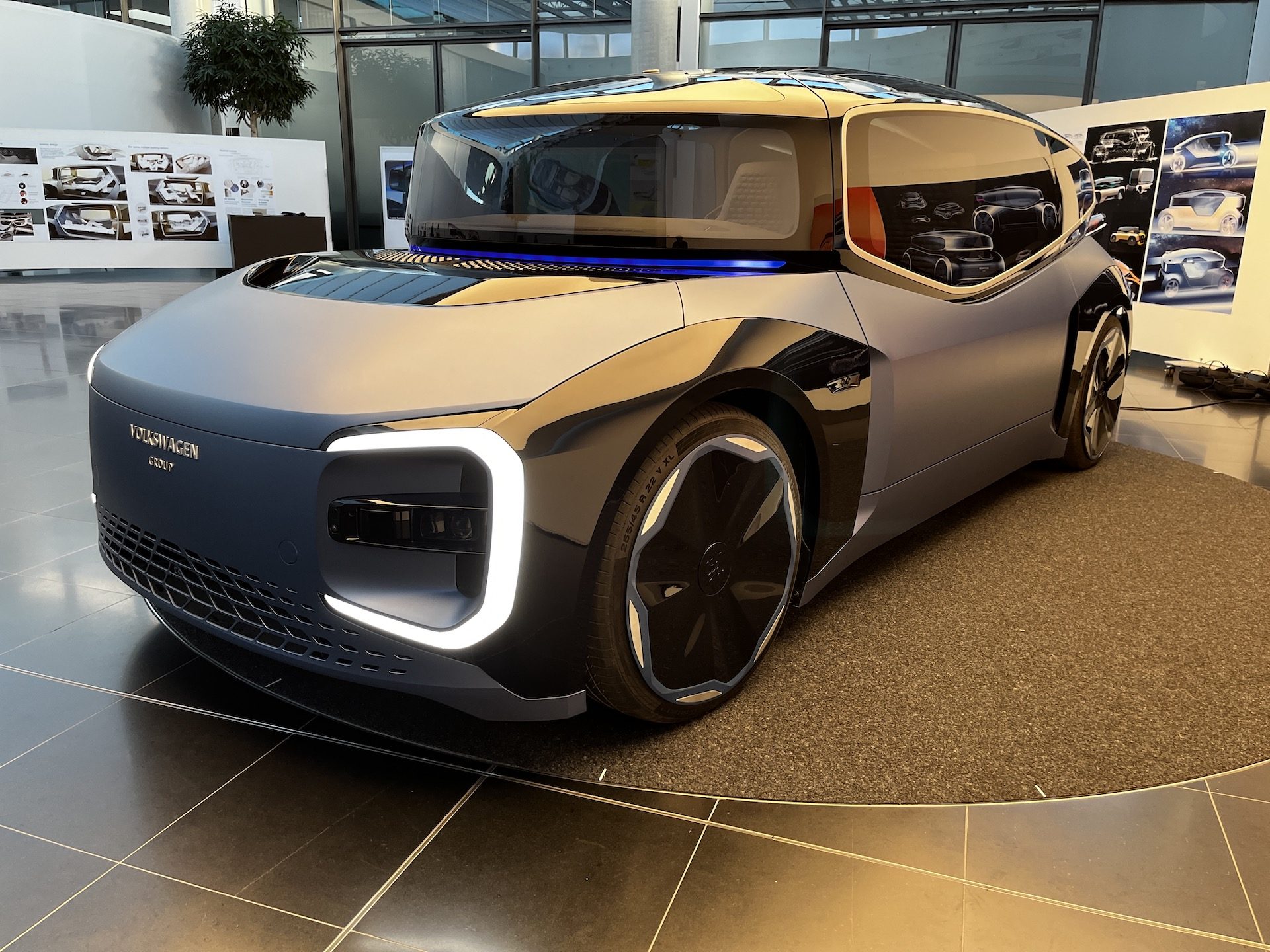 These are not unique to the German band and have given rise to other style studies. But where the Gen.Travel stands out is its ability to combine them all and see the car as a service and no longer an object. Indeed, the aim of the concept is to offer another mode of transport, autonomous and capable of replacing the aircraft in certain cases. In the spirit of the design teams of the Volkswagen Group and in particular of Klaus Zyciora, the head of the Design division, “Gen.Travel should be used as a service. The user determines the configuration of the cabin depending on the number of people to be transported and the type of journey to be made, and the car behaves like a robot taxi that comes and takes you from one point to another. If you want to work during the trip, it turns into an office. If you prefer to sleep, the seat extends into a bed, and if you want to travel with your children or your pet, the cabin also adapts ». 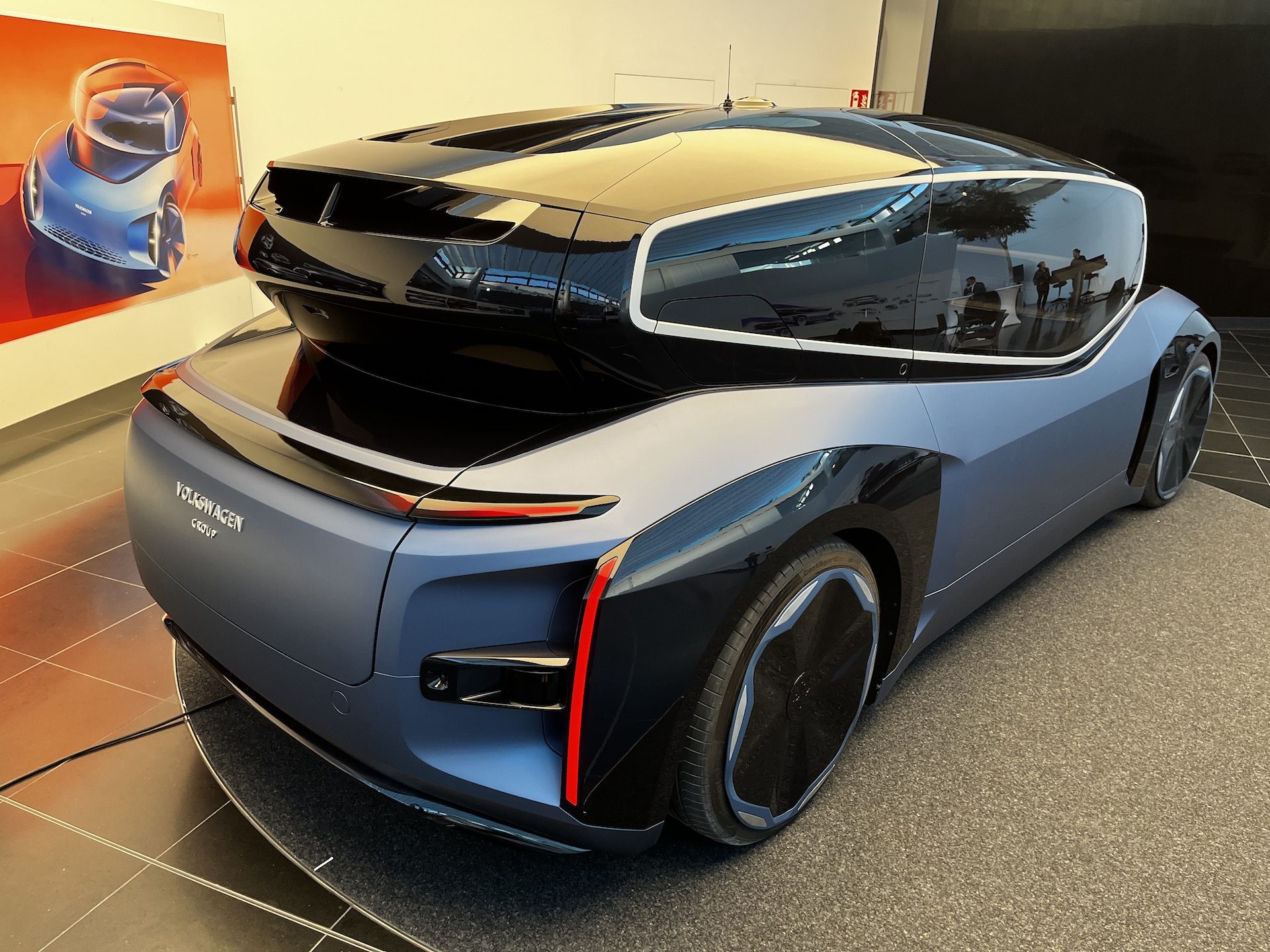 We were able to discover the Gen.Travel, get on board and talk to its designers. We were also able to play around with the augmented reality display, the mood settings, and even try out the “dodo” mode. Of course we wanted to tell you.

Don’t look for the logo, it’s not there

Let’s start with the basics. Why Volkswagen Group and not just VW? Simply because the Gen.Travel was designed by the “Future Center Europe”, a research and development entity common to all brands of the German group (Audi, VW, Seat, Cupra, etc.).

Gen.Travel does not have its own logo. It carries the Volkswagen Group listing and serves as the working base for all brands in the set. It is up to them to take certain technologies and apply them to their range.

No, but what is this style?

Not meeting the limitations of a classic vehicle, the Gen.Travel is free to explore a few, shall we say original, paths in terms of aesthetics. The result is surprising to say the least and probably too far from today’s standards to seduce in a competition of elegance… 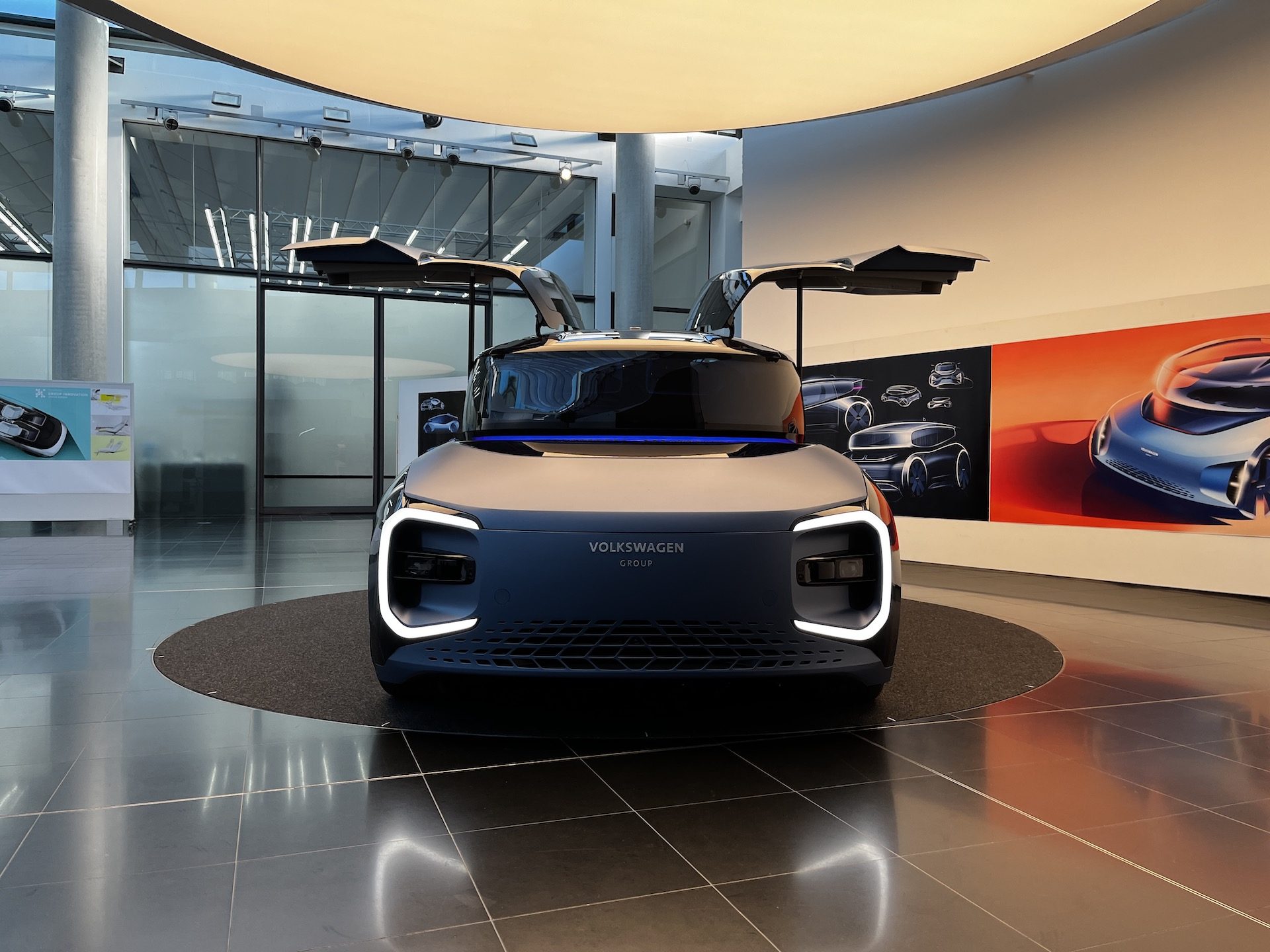 What strikes at first glance is the impression that the vehicle has been cut in half horizontally. There are clearly two distinct volumes, between the capsule-shaped top and the extremely wide base. The vehicle is very imposing, which is explained by the common thread that runs through it: to provide maximum space and comfort inside for a journey that can last several hours. The other particularly surprising element is this very round and perfectly vertical windshield which is hard to believe improves the aerodynamics of the car.

In general, the Gen.Travel allows an important place to the windows that not only let the light in, but also allow the passengers inside to enjoy the scenery to the fullest. These windows can also be darkened in an instant to maintain the privacy of the residents. After all, who wants to be seen sleeping with their mouth open? 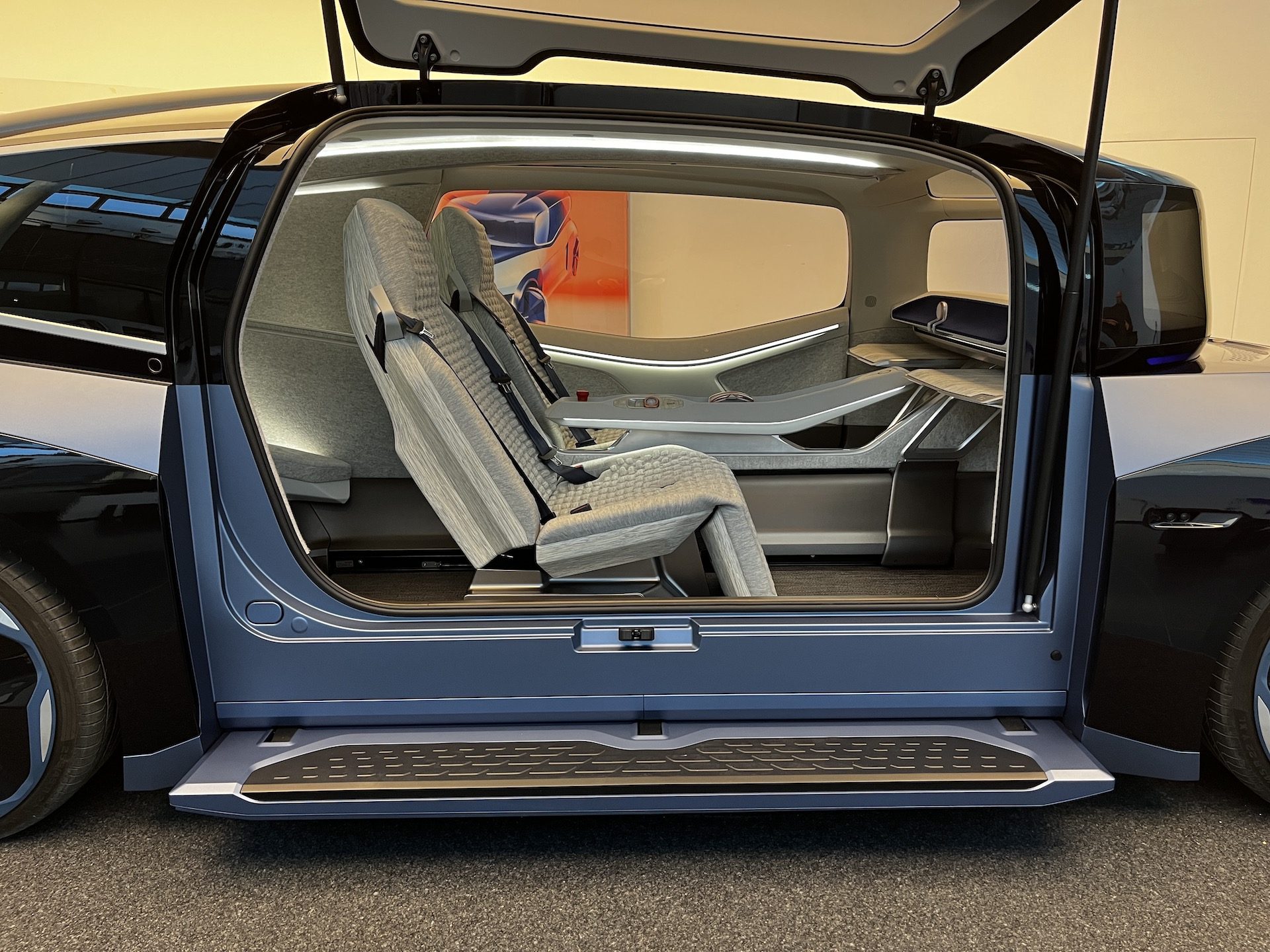 Finally, despite its imposing stature and its downright functional dimension, the concept car of the Volkswagen group allows itself some coquetry, such as the rear spoiler or the butterfly side doors.

A car according to your wishes

Autonomous vehicle mandatory, the heart of the innovations is in the car. Since it is a service, the appearance of the cabin changes as needed. From the four-seat version to create a central workspace, to the double seat that converts into a bed, to arrangements to accommodate children or heavy loads, VW’s designers didn’t lack the imagination in time to create different types of configurations. Depending on this, the experience on board will vary, but will always be very different from a trip in a classic car. 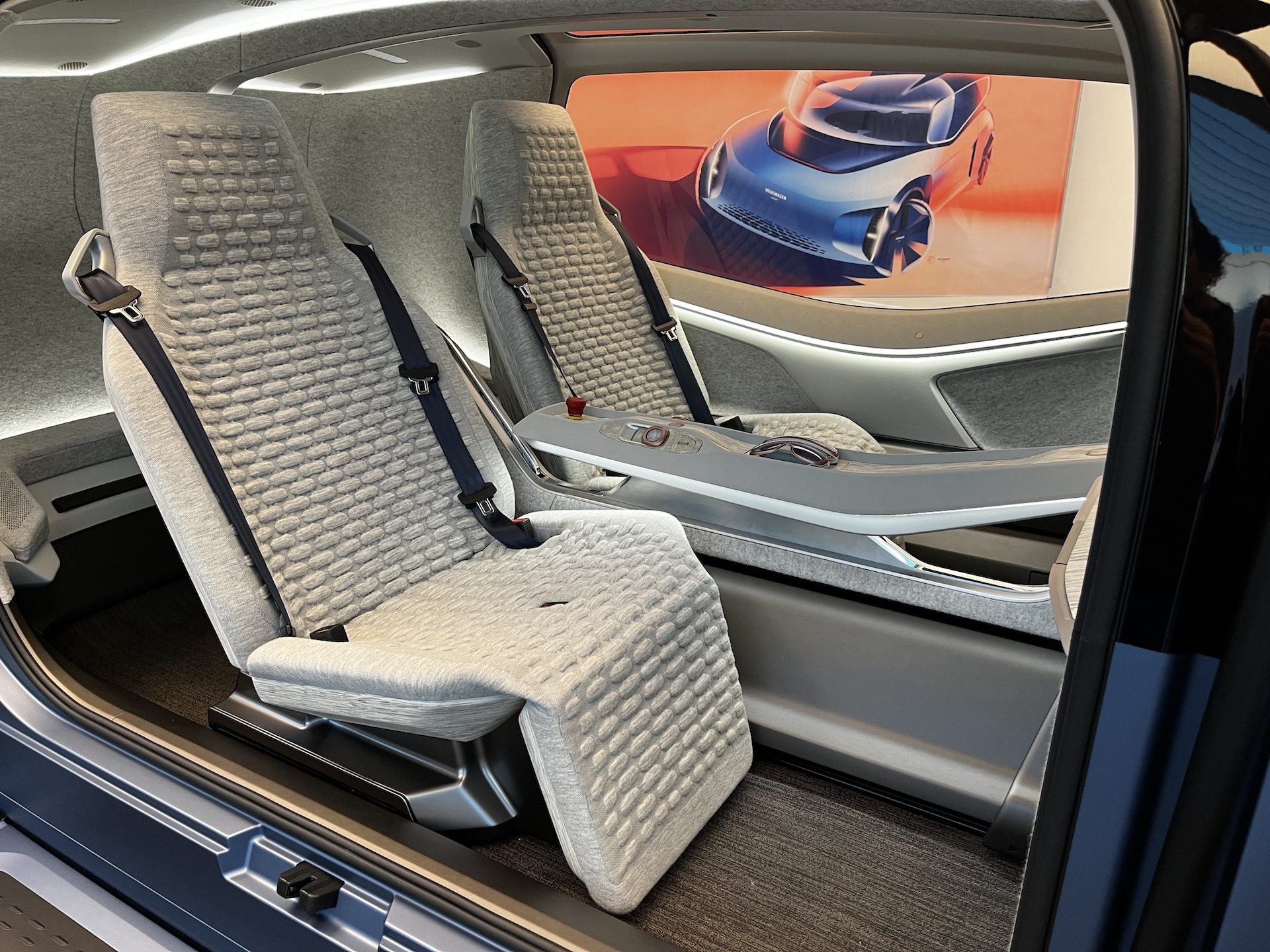 Regardless of the interior design chosen, there are elements that do not change. The lack of a steering wheel is the first thing you notice. The car is “controlled” by an artificial intelligence, aptly named Luna. This is materialized by a small gadget that can move from left to right on the dashboard, also giving you an overview of the travel time and the remaining duration of the trip. Indeed, at the beginning of the journey, the little gadget is placed to the left of the dashboard and arrives on the other side as soon as the last hectometers have been covered. But for most interactions, with Luna or directly with the vehicle, users have AR/VR glasses that project a screen onto the entire windshield. Finally, to vary the atmosphere on board and change the layout of the seats, passengers have a remote control with a rotary wheel, like on the iPod. 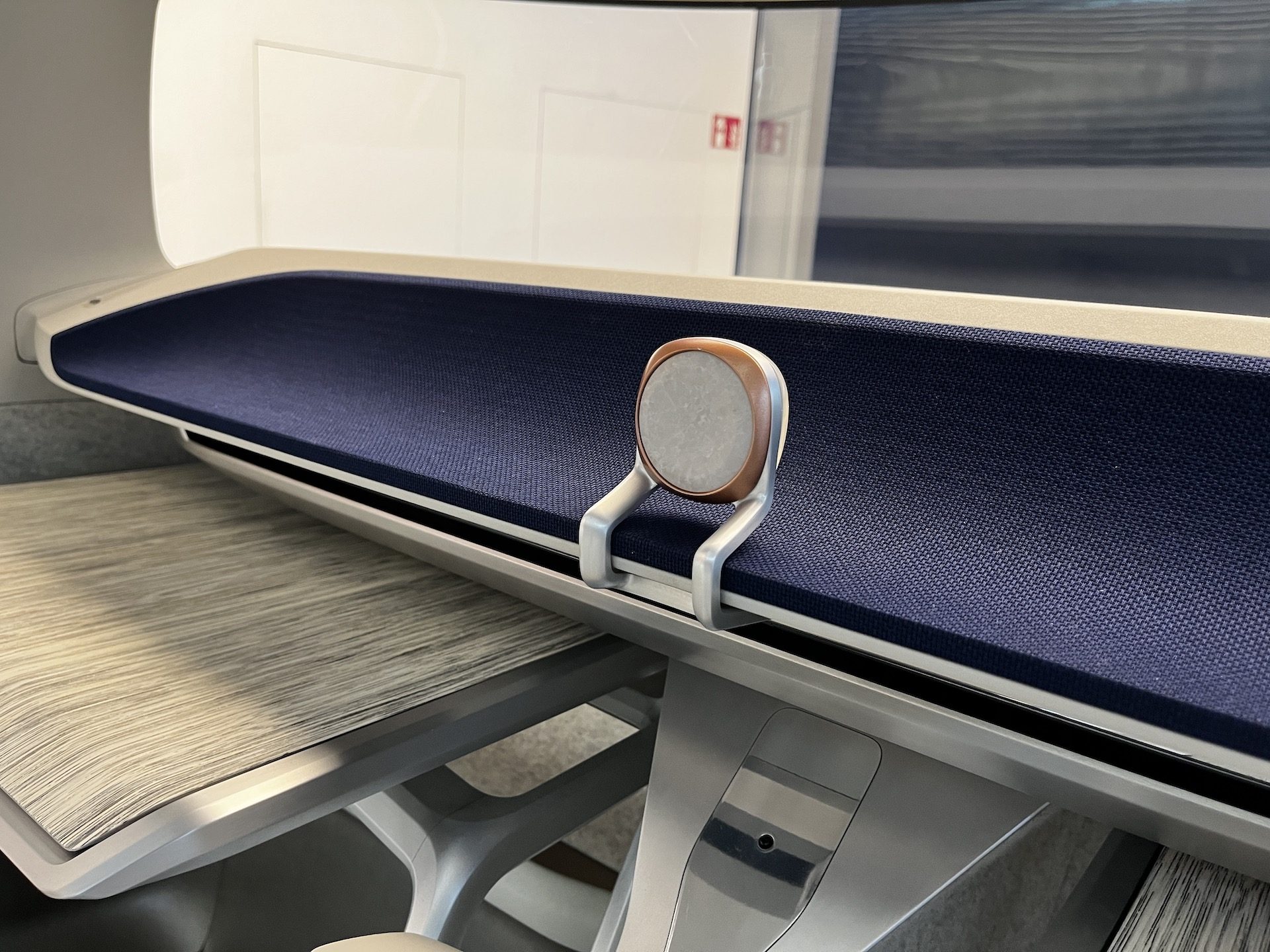 In terms of materials, the Gen.Travel follows a strong trend in the automotive industry, which is to use recyclable materials or materials made from recycled materials to reduce the overall environmental impact. The VW Group designers also add a healthy dose of rattan and 3D printing where possible. 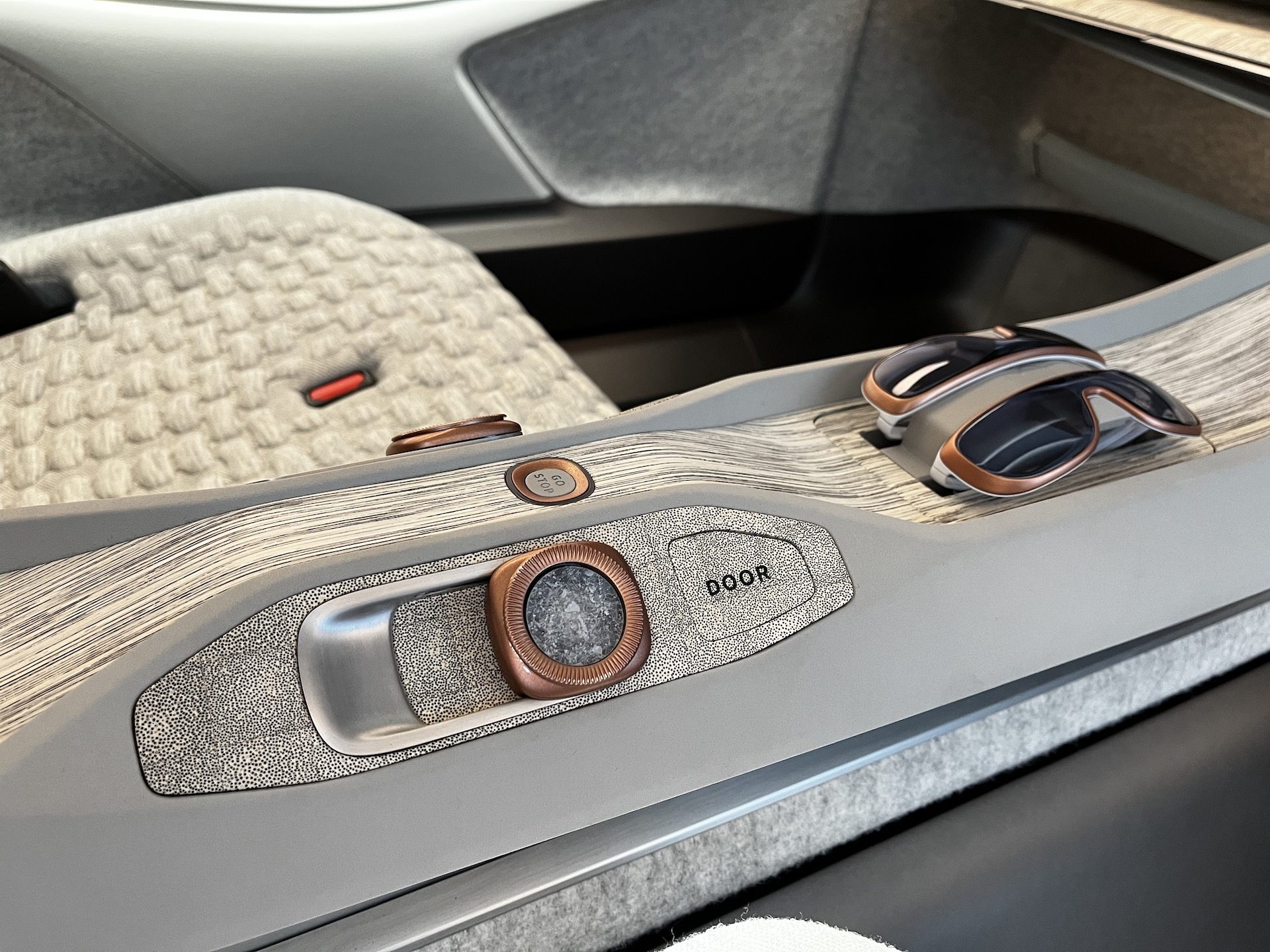 The Gen.Travel on the road, really?

The designers at Volkswagen’s Future Center Europe were not satisfied with designing a vehicle and manufacturing a more or less likely carcass. After two and a half years of thinking, involving a team of eight people, the Gen.Travel was actually made. It is now a concept that can drive and that has also done several tests on the road, in a closed circuit of course.

Because in addition to exploring the way of life and interacting with a car to live, the show car should also put the group’s advancements in the autonomous car into practice. For example, the VW teams came up with a driving mode in which several Gen.Travel who were going on a similar journey could get close enough in one row to improve the aerodynamics of the entire group. 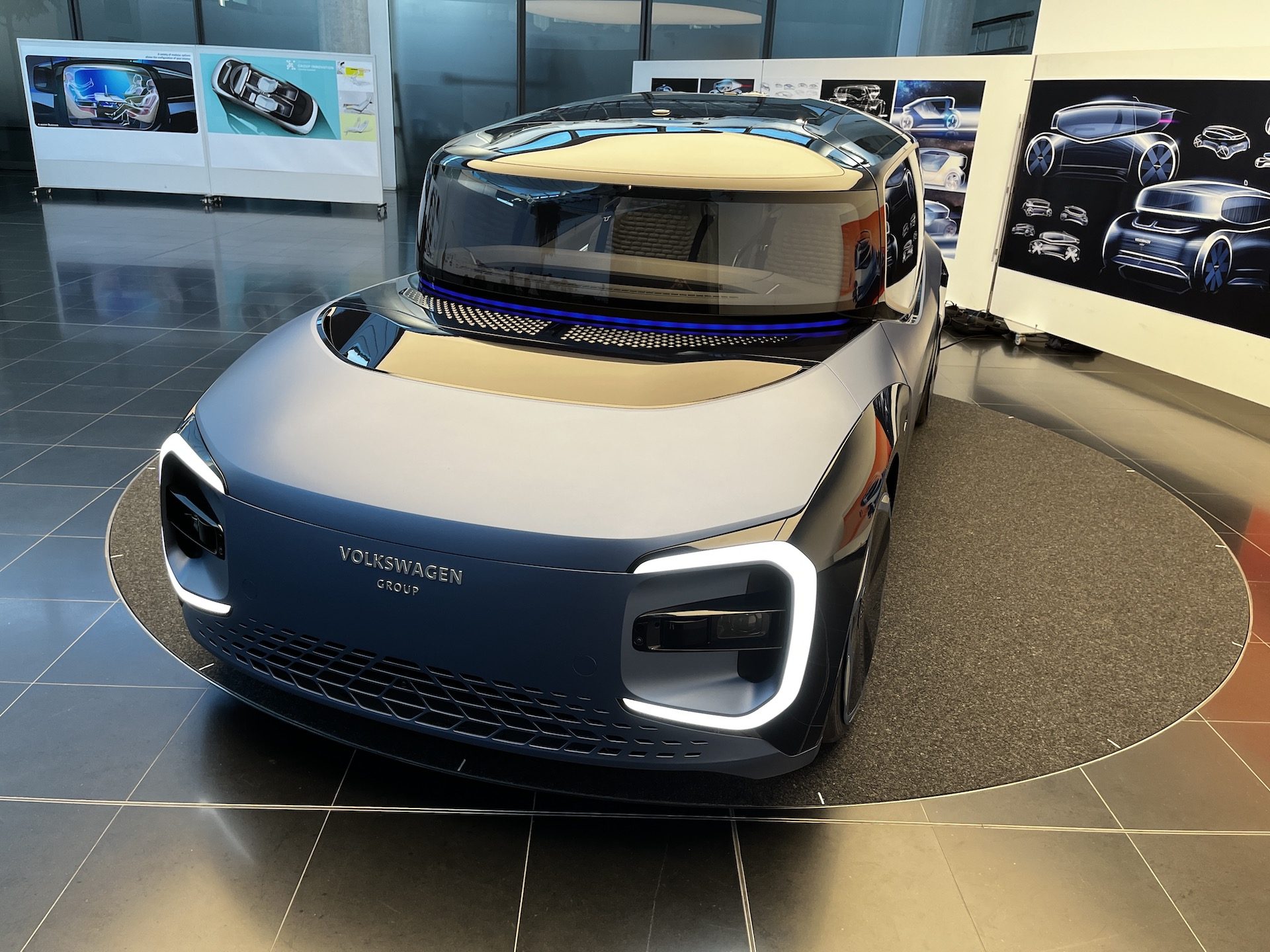 A concept, to do what?

The Gen.Travel is one of those concepts that we don’t encounter on the road. Sure, but unlike other style studies that are content with a design and a good idea, the work of the designers of the Volkswagen group has gone further. Their reflection led to a new form of car consumption, seen more as a service than a good. In fact, their work, or at least snippets of what was experienced on the Gen.Travel, could very well be traced back through the group’s various brands. And while the Gen.Travel will certainly never replace long-haul flights, it is food for thought and already offers a credible alternative to short-haul flights.