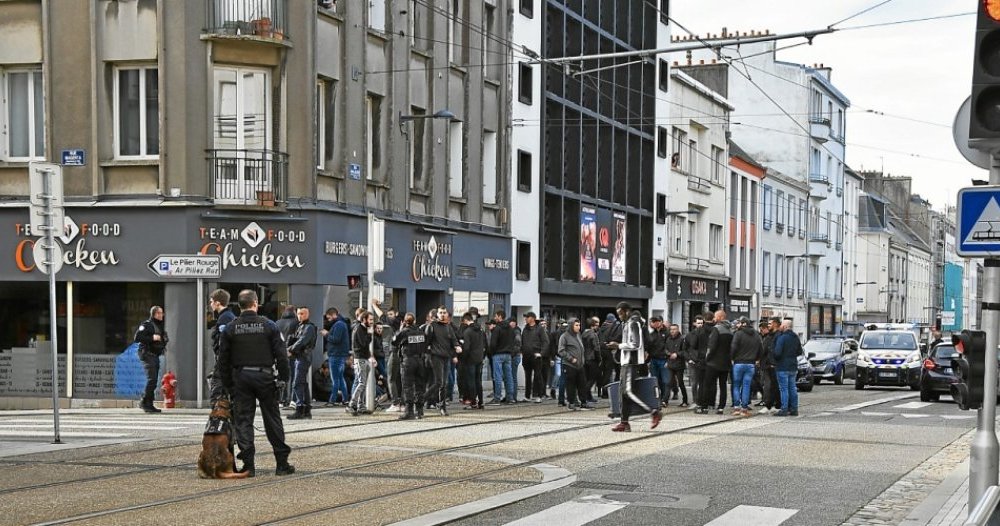 The “fight” meeting or the fight between supporters of Brest and Lorient was, it seems, taken the day before, if we go by the rumors that circulated on social networks in the evening. “It was a coincidence,” assures a Brest supporter who was questioned late in the morning, when he boasted that he had “spit out their teeth on Lorient”.

“They are not afraid to kill”

The scene that took place on Sunday, October 9, 2022, between rue Victor-Hugo and rue Jean-Jaurès, deeply shocked the witnesses who, shortly before 11 a.m., saw young people brandishing smoke bombs and fireworks, fighting and running in the street, while the match van Brest against Lorient did not take place until 3 p.m.

all the warring parties, Residents of Lorient, devoid of distinctive signs near the stadium by an order of the prefectas Brestois, devoid of bleacherswere dressed in black and even used street furniture to beat each other with plates.

“I saw extremely violent situations, with the two groups insulting each other until four individuals grabbed one and beat him. Four to a single youngster on the ground, they kicked him in the face, with no restraint in their gestures. They are not afraid to kill! It was amazing. I went to talk to one of the victims who had just been beaten: she had a black eye, a bruised face and an egg-sized bump on her head. His only response was to say it was the game! It is harrowing, the image it gives is terrible. As Der Zakarian says, that’s what gyms are for, if you want ultimate boxing! Says a witness at the scene, who saw several injured, but only one Lorient supporter was received by the firefighters. There was no arrest.

A resident of Lorient received by firefighters

The turnout of the supporters was stopped by the police at around 11.10 am, rue Jean-Jaurès, near the Celtic cinema. There were only about forty Lorient residents left, including an injured one wrapped in a survival blanket, sitting on the steps of the cinema. When the fire brigade arrived, he was able to walk to the ambulance with his face bleeding to be transported to the emergency room. After an hour of waiting, the people of Lorient, under police supervision, were able to walk into rue Jean-Jaurès before rushing to the Carrefour Market to buy food.

At that time, nine vehicles of mobile gendarmes arrived on the scene and around 1.20 pm the inhabitants of Lorient were able to reach the Francis-Le Blé stadium surrounded by the gendarmes via the route de Paris and rue du Guilvinec, not without being insulted by a Brest supporter who drove past: “Merlus, we’re going to smoke you”.

An attitude that alarmed a passer-by from Brest who witnessed the violence: “It is because of this stupid behavior that football fans no longer dare to come to the stadium as a family with their children. What is the purpose of these supporters? “.

At the start of the match, Brest supporters set off fireworks outside the perimeter fence, route de Quimper, whose smoke billowed over their empty stands. But that didn’t stop the game. A banner hostile to the leaders was also hung on the wall of the stadium: “Betrayal direction, Francis Le Blé to the Brestois”.
A total of 190 police and gendarmes, including two mobile squadrons, intervened during the day.

“The football match between Stade Brestois and FC Lorient at the Francis Le Blé Stadium, in Brest, on Sunday, October 9, 2022, at 3 p.m., was classified as risk level 4 out of 5 given the risk of public order disturbances affecting certain groups of ultra-supporters. of the two teams”, writes the Prefect of Finistère, this Sunday evening, stressing that everything went well in the area and in the stadium, “thanks to the mobilized police and reinforcements of mobile gendarmes”. Indeed, there were 190 police officers and mobile gendarmes in Brest to ensure the safety of this meeting.

“No incident nearby, nor in the stadium”

“There were no incidents or injuries during the game or around the stadium before and after the end of this football game. On the other hand, around 11 am, violence broke out in the center of Brest, between about forty ultra Lorient and ultra Brest supporters. This violence, which did not cause any damage, caused a minor injury, which left the hospital in the afternoon, on the side of the ultras of Lorient,” added the state representative.

In addition, the Prefect condemns in the strongest terms this violence resulting from the non-respect by a minority of ultra-supporters of Lorient of the Prefectural Decree imposing on them a meeting place with a police escort. stadium. The 600 Lorient supporters who respected this decree could be transported to the stadium on the outward and return journey without any problems.”

“As for the perpetrators of violence in the city center, the identities have been identified and an administrative follow-up will be given to this non-compliance with the prefectural decree. Likewise, if complaints are made, every effort will be made to identify and bring to justice the perpetrators of this violence.”