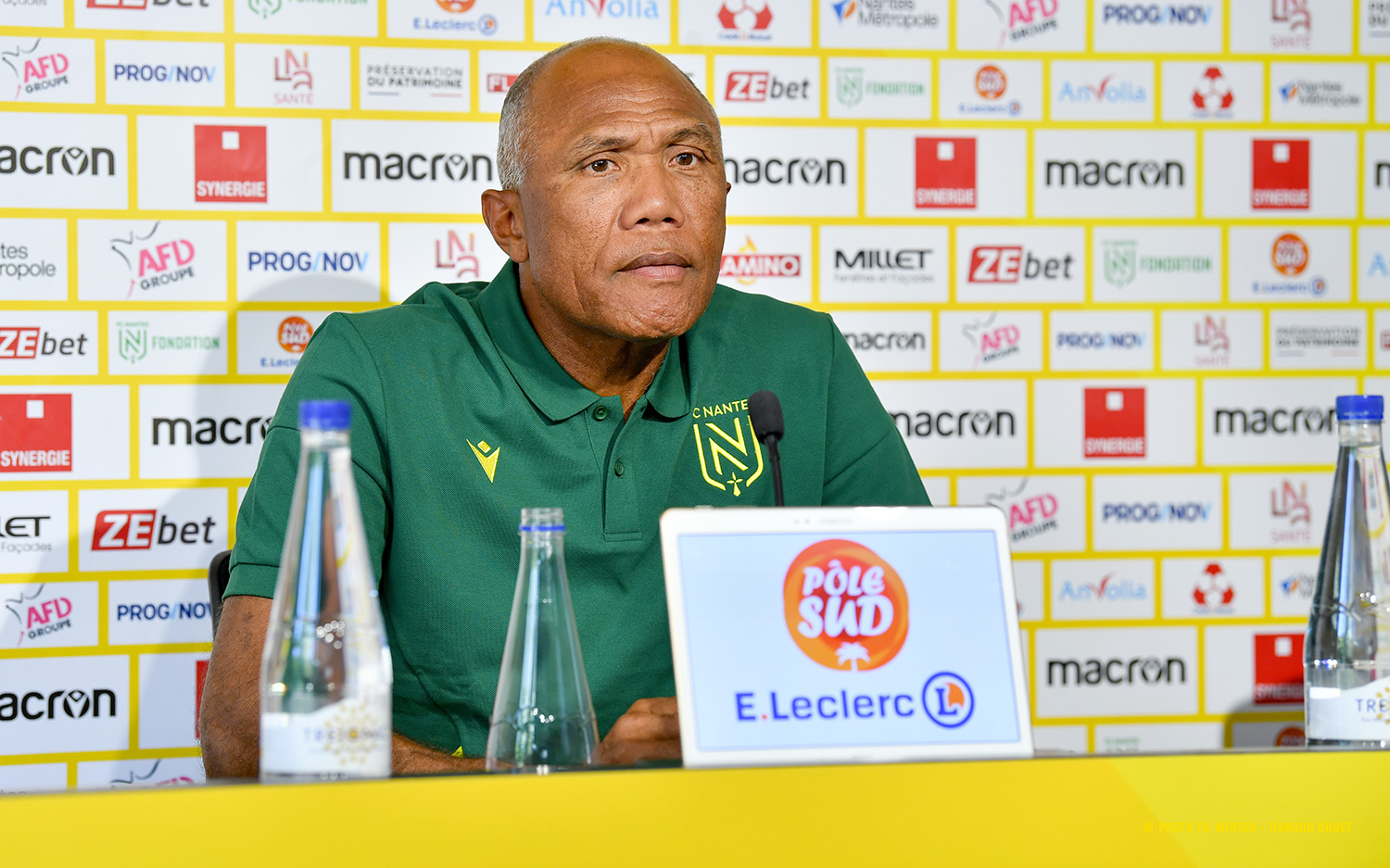 This afternoon, Antoine Kombouaré spoke to the media about tomorrow afternoon’s meeting (5:05 PM). As a reminder, the yellow and green ones will travel to Roazhon Park as part of the 10th day of L1. Find his press conference below.

The health point
Antoine Kombouare: Those who were in Freiburg are all on deck. We always have the same absentees: Charles Traoré and Fabien Centonze. I was hoping the last one would have been there, but it takes time. We hope next week. The glitches he experienced made him doubt. Fabio is also too short.

Do you have time to do something between the two games?
Antoine Kombouare: Yes. We discussed, made video, rest. This afternoon training and departure to Rennes.

Is the perception the same cold after the game in Friborg?
Antoine Kombouare: That’s what we said. Defensively, we had a game that wasn’t too bad. There is a mistake and the goal hurts us. We can stay in the game, but the second goal… the game is over, even though we have situations. You have to find the right balance between defending and causing trouble for the opponent, playing to win.

The role of executives?
Antoine Kombouare: They take responsibility, are mentally strong, gather the troops. We have to keep playing. Don’t just think about defending. You have to know how to defend, but also endanger the opponent and score.
It’s no shame to say that if we come 16th, it’s because we don’t have the level we had last year. It’s an observation. We all know we’re not good. We must take responsibility on the ground and take it forward to move forward. The score doesn’t interest me. This is the result of what you propose. You have to play, not be afraid. I try to make that clear to my players.

Do your executives struggle with criticism?
Antoine Kombouare: No. We are not doing well because the managers are not at the level. But you have to accept criticism and deal with it. But I await the answers on the ground. They are there to do their job as a top athlete. These are observations. It doesn’t explain everything, but we don’t have a homogeneous team at the top.

Last year’s collective power doesn’t seem to be there…
Antoine Kombouare: As long as we lose games, we go to the negative. Defensively we make mistakes and we can’t score. We have too much technical waste. It requires level players. If you have 2 or 3 players that are not good, it will affect the collective. We’re not going to question everything. There is the Monaco match which is special, but otherwise we play consistent matches but not over time. You need a little more offensive momentum to cause trouble. It is transient. It’s part of what we have to live. We have to fight against that. We have a calendar against better teams than us. We must unite in the face of these difficulties and not complain.

How to bounce back?
Antoine Kombouare: We keep faith in our players, we work, we breathe energy into them and we work tactically and technically.
It’s a big challenge. But that’s my job. They are experienced players. I have to find the solutions with the players. Here we see the mental, physical, technical capabilities…

Are we in a similar situation when you arrive?
Antoine Kombouare: Not really. We are far from it. We have never been demoted.

Rennes, a strong offensive potential…
Antoine Kombouare: You don’t have to defend alone. They can play offensively, quality players… we have to be able to defend, but we also have to be able to give them problems. If we defend alone, there’s a 9 out of 10 chance we’ll lose the game. Everyone has to defend and everyone has to attack when we have the ball. You need to get the ball out right, a little more involved from the sides…
Defeats involve a loss of confidence. You have to give them some and play for free. Don’t think about the outcome.

It’s more complicated outside…
Antoine Kombouare: At La Beaujoire and beyond, the face is not the same. We need resilient people to fight this turn of events. We must not leave defeated because we are on the outside. Otherwise I won’t go! When I go, I have discussed with the players. It is difficult. It’s Rennes. But it’s a derby. Knowing that it is a complicated competition that awaits us.

More risk in the passes?
Antoine Kombouare: Not only. The first attackers are the goalkeeper and the defenders, then the midfielders… it’s a series of things that require players to maintain confidence. Rennes will cause trouble. You have to know how to answer them and ask them questions. Once on the field you don’t think about the ranking, the result. You think about playing the game. The worst is to see the players tense and offer nothing. Whatever the score is, it’s at the end of the game that we look at it.

Rennes as strong as Monaco and Friborg?
Antoine Kombouare: In our position they are all strong. There is a calendar, we are playing our 3rd trip. It is difficult. But we have to face it, with great desire. We’re not complaining. These are great games to play. We are going to play in a full stadium in Rennes.

Appiah scores points…
Antoine Kombouare: It’s hard to say a player is good at a struggling collective. We’re all in trouble today. We are working to regain collective strength.
The problem is not just mental. If you concede goals, it’s tactical or technical. If you lose, that’s a little bit of everything. And it eventually hits the mind.