Home » Five in a row for Monaco! – Dbrief and COMMENTS from the players (MHSC 0-2 ASM) – Football At the end of a very dedicated encounter, Monaco won Montpellier (0-2) this Sunday, during the 10th day of Ligue 1. A fifth consecutive victory for the princely club in the championship, which allowed it to cement its 5th place and press the leading teams. 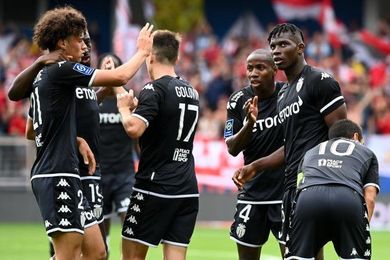 Monaco had no feelings towards Montpellier.

Monaco has definitely started its season. After a complicated start, the princely club booked a fifth success in a row on Sunday during the 10th match day in the Ligue 1 against Montpellier (0-2). Efficient and solid, Le Rocher’s formation solidifies its 5th place and puts pressure on the leading teams in this sprint all the way to the World Cup.

In ideal conditions, the two teams showed a similar level. When the opportunities were missing, the duels were especially tough, such as the opposition between the imposing Embolo and Julien. As time went on, the physical fighting intensified on both sides, but the defense got the upper hand from the uninspired attacks.

Aside from a sudden attack from Caio Henrique, well repelled by Omlin, Monaco struggled to make a difference in the final third of the field. In contrast, Wahi’s strength and Nordin’s vibrancy could have rocked this first period, but the Asmist rear fell back well. Just before half time Embolo, chasing a too long check from Ben Yedder, shot Omlin with a heavy shot under the crossbar (0-1, 45th + 1).

When they came back from the locker room, Montpellier pressed hard to come back. Savanier, from a free kick, and Nordin, with a shot from medium height, gave Nbel a cold sweat. As a minor attacker, the Mongasque suffered from the opposing team’s attacks, which became more and more regular but lacked the precision to alarm the German goalkeeper. In the first bout of the second period, Ben Yedder lost his duel with Omlin.

A first warning… before the penalty. Entering Embolo’s place, Boadu in turn misled Omlin, on a cross from Caio Henrique. A goal validated by the VAR (0-2, 80th). A feat that absolutely sank the inhabitants of Montpellier, unable to frame the slightest shot in this part. With this fifth win in a row in the league, ASM is starting the season earlier than in previous years. It will be necessary to count on the Philippe Clement tire.

A very committed match with many muscular duels. Technically, the encounter left something to be desired, even if Monaco pulled out by being fatal on rare occasions. Overall not a great show.

– Launched by Vanderson, Akliouche enters the penalty area. At the reception Ben follows Yedder, who misses control but sees Embolo well behind. On the penalty spot, the Swiss striker Omlin shoots under the bar with a heavy shot (0-1, 45th + 1).

– Shifted to the left by Golovin, Caio Henrique sends a beautiful cross behind the Hérault defenders. At the reception Boadu, who stretches his foot to get ahead of Omlin (0-2.80th).

Maxifoot has assigned a score (out of 10) of comments to each player.

Very big match of the Mongasque vice-captain. Moved first by the mighty Wahi, the central defender recovered perfectly to put out his fish-fish. If Monaco doesn’t concede the slightest shot on target, it will be primarily because the former Rmois player was able to position himself to hinder his opponents.

Jonas Omlin (5): Knocked close by Embolo, he is not clear on Boadu’s goal with a bad reading of Caio Henrique’s cross. It’s a shame, because he had been decisive several times.

Enzo Tchato Mbiayi (5): just average. The right-back was little used by the Mongasques, but he still lacked aggressiveness against Caio Henrique on Boadu’s goal. Replace the 82nd minute with Falaye Sacko (not not).

Christopher Julien (5.5): the former Toulouse player had a big duel with Embolo, which he eventually lost. However, he caused the Swiss striker a lot of problems.

Maxime Esteve (5): The central defender from Montpellier had a constant hard time on this part. Quickly warned, he walked on eggshells to avoid eviction. Embolo gave him a headache for over an hour.

Nicolas Cozza (5): a disappointment. Positioned on the left side of the defense, the club-trained player also missed self-sacrifice and bite. He is far too lax with the action leading to the first goal.

Jordan Ferri (5): The midfielder who passed through Lyon struggled to meet the physical challenge of Camara and Fofana. He made little contribution to his editing efforts. Replace the 82nd minute with Valre Germain (not not).

Joris Chotard (5): The Blueberry gave Nbel chills with an exciting pass over the bar. But in the impact on the game, he too missed his appointment. Replace the 82nd minute with Khalil Fayad (not not).

Arnaud Nordin (6): The former ASSE player hit hard in his lane by causing serious trouble for Caio Henrique. He is close to equalizing on his return from the dressing room on a shot from medium height. He didn’t blush at his performance. Replace the 62nd minute with Maouassa casserole (no not).

Tji Savanier (5): a good start to the race with good openings for Wahi and Nordin, then much more effort to get rid of the Mongasque press. After returning from the dressing room, he comes close to scoring from a free kick.

Stephy Mavididi (5): Back from injury, the England striker was restless without making any difference on his wing. It was pretty well boxed in by Vanderson. Replace the 62nd minute with Wahbi Khazri (not not).

Elye Wahi (6): the club’s top scorer made an interesting copy with great duels against Disasi and Badiashile. He let his power speak to keep the Mongasque bloc low. Yet we saw him much less in the period of Montpellier domination after the break. Unfortunately.

Alexander Nbel (5): The German goalkeeper had nothing to do. And rightly so, Montpellier was not aiming for the slightest attack in this match. An easy day.

Vanderson (6): A correct performance for the Brazilian right. He is the origin of the first goal that Embolo signed with an authoritarian climb in his lane.

Benot Badiashile (6.5): Pretty solid overall, the Monegasque centre-back was shaken a few times by Wahi though. He picked up a yellow card for a late tackle after halftime, which somewhat ruined his performance.

Caio Henrique (5): The Brazilian left side had a complicated day. Even if he gets his team’s first chance, the Mongask has suffered a lot defensively. He saves his match with a nice decisive pass for Boadu in the last fifteen minutes. Replace the 84th minute with Ismal Jakobs (not not).

Maghnes Akliouche (5): a shy encounter for the young Mongask who was behind Embolo’s goal before half-time with a difficult to defend cross in the penalty area. Replace the 46th minute with Krpin Diatta (5)who tried without too much difference to put danger on his track.

Mohamed Camara (7): after his big game in the Park, the Malian midfielder slowly but surely climbs the slope. Highly effective in recovery, he spent his day harassing Hrault circles. He tried his luck whenever he could, forcing Omlin to make a save on a wide shot.

Youssouf Fofana (7): the French international confirms his very good start to the season with a new quality boost. He too was good in recovery and serene in his transmissions for his attackers. A certain value.

Aleksandr Golovin (6): Positioned on the left, the Russian attacking midfielder has worked hard to lend a hand to his defence. Nevertheless, we expect a lot more from such a fine player who always struggles to show his talent to the fullest. He is still involved in the second goal with his shift to Caio Henrique.

Breel Embolo (7): Monaco still made a decent deal by getting the Swiss striker back for just €12.5 million… Impressively with his back to goal, he fought a merciless duel with Valentijn. He is rewarded before the break with a heavy blow under the bar to show his team the way. Another full game for him. Replace the 72nd minute with Myron Boadu (not not)goalscorer on his first attempt.

Wissam Ben Yedder (5): The Monegasque captain is less prominent than on his last outings. Bit dangerous, he took part in the opening of Embolo’s score in his own way with a control too long on the center of Akliouche. Replace the 87th minute with Takumi Minamino (not). 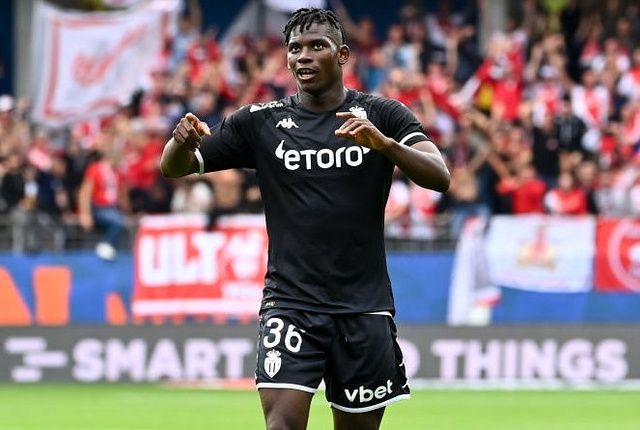 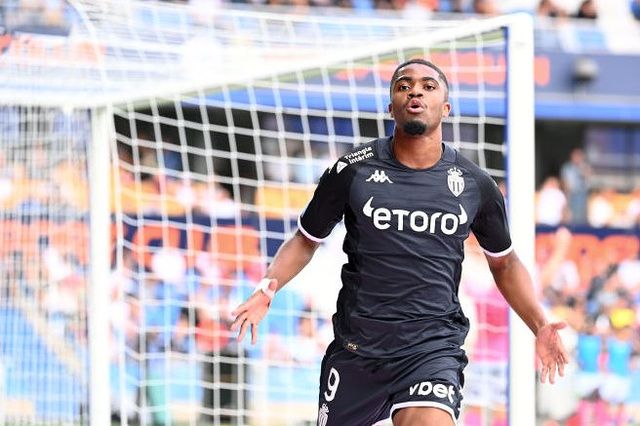 The duels were tough at Mosson 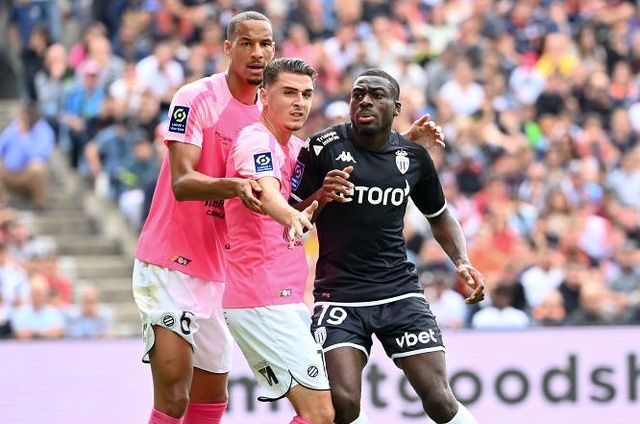