On behalf of the 10th match day of the Ligue 1, Stade Rennais beat FC Nantes (3-0) this Sunday. A success that allows the Rouge et Noir to get closer to the leading teams. 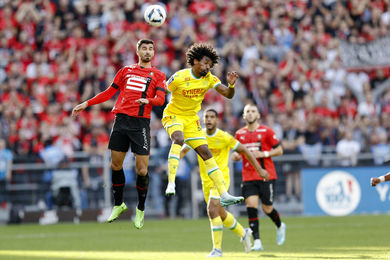 Martin Terrier took over the Nantes.

On good momentum in Ligue 1, Rennes confirmed his current form in the derby against FC Nantes.

The team led by Bruno Genesio clearly won (3-0) despite meeting at two speeds.

The big start of the Canary Islands

Three days after their respective matches in the European Cup, the two teams got off to a great start!

The start of the match was intense on both sides and probably even more so for the Canaries who didn’t hesitate to bomb Mandanda, alert to Blas’ powerful shot. But over the minutes, Rennes took control. The Nantais were robbed of the ball and after a first chance from Gouiri we were not surprised that the former Niois found the error with his header (1-0, 26′)!

Enough to reward the long strong time of the Rouge et Noir who, despite the drop in speed at the end of the first period, passed very close to the break on Terrier’s head without a goal before the break. The Kombouar men therefore stayed in the game. But their timid initiatives didn’t endanger Rennes in a much less lively second act.

We had to wait the last 10 minutes to see the press from Rennes and ensure their win thanks to Terrier (2-0,80th) and the incoming Dou (3-0,84th) on a beautiful half volley! Winner of this derby despite the exclusion of Rodon (88th), the Breton club is following the good car in the standings, unlike a relegated Nantes team.

Contrary to what the score suggests, Rennes did not fly over the game. After a rather enjoyable first period, the second was essentially played to a false rhythm unworthy of a derby. Fortunately, the last two goals are worth the detour.

– Moved by Terrier to the right in the area, Kalimuendo sees his crotch blocked by Pallois. The ball lands on Gouiri’s head, who cheats Lafont near the post (1-0, 26th).

– At the end of a very nice collective action in the ashes, Gouiri Terrier launches perfectly into the depth. The striker leads Castelletto and will win his duel against Lafont (2-0, 80th).

– Barely comes into play, the young Dou, the reception of a cross from Terrier on the right side of the surface, chained control and half volley in the opposite corner! (3-0, 84th)

Maxifoot assigned a note (out of 10) of comments to each player.

Another great performance from the Rennes striker! Constantly available between the lines, he often created a gap in the middle of several opponents. His technical accuracy and game intelligence have wreaked havoc on the defensive sector of the Canary Islands. Rewarded with a goal and a decisive pass for Dou. Then replaced by a deserved ovation by Kamaldeen Sulemana (not not).

Steve Mandanda (6): Little used during the game, the Rennes goalkeeper remained alert to Blas’ two powerful attacks, the second from a very well placed free kick at the end of the game.

Hamari Traor (6.5): Like his team, the captain had a complicated start in which Simon made the difference at his side. But he quickly regained the upper hand and multiplied the good offensive combinations with Bourigeaud or Gouiri. Without consequence, his loss of ball for Mohamed does not affect his performance.

Joe Rodon (4): Despite his recovery issues, the Welsh international had a fairly quiet game. At least until the 89th minute and his badly negotiated duel against Mohamed. He therefore takes a red card synonymous with suspension for the arrival of Olympique Lyonnais next Sunday.

Arthur Theate (7): Unlike his teammate at the center hinge, the Belgian defender has always remained calm with the ball at his feet. His composure and the certainty of his interventions reassure Rennes’ defenses, as does his ability to manage depth. Well placed, he removes a cross that Appiah saw himself steal.

Adrien Truffert (6): Always so generous in the efforts, the left side has multiplied the round trips. Terrier’s availability has often made it easier for him to get the ball out. We also remember his excellent return on Blas.

Benjamin Bourigeaud (6): Sometimes discreet during the encounter, the attacking midfielder is the author of a serious match. He took part in many combinations on the right and never forgot to help Traor in defensive duties. Replace the 83rd with Desir Dou (not rated)author of a magnificent goal after the goal against Dynamo Kiev (2-1) on Thursday.

Xeka (5.5): Previously in the legs for a recently arrived joker, the Portuguese showed a promising bond with his teammates. In the first period he managed to find his partners between the lines. Before slowing down on the second act, which isn’t really surprising. Replace the 71st with Lesley Ugochukwu (not not).

Flavien Tait (6.5): very active in recovery, the former Anjou had a great first period. After that less visible despite the small festival on the left. He quite miraculously comes out without a map after his sole on Blas.

Arnaud Kalimuendo (6): Decisive passer for Gouiri, the striker recruited this summer confirms a good relationship with the former Niois. The two Bleuets did well in the first period. But during a much less lively second act, he gradually disappeared from the game. Replace the 71st with Lovro Majer (not not)involved in the movement of the Terrier target.

Amine Gouiri (8): This time no one can blame him for forgetting his teammates. The Lyon-trained striker, very close to Kalimuendo, proved to be available and altruistic. His excellent performance was enhanced by a goal and a decisive pass for Terrier. Replace the 87th with Matthis Abline (not not).

Alban Lafont (4): neither decisive nor guilty of the goals against, the Canary Islands keeper had a good scare at a clearance blocked by Kalimuendo.

Dennis Appiah (4): less legs than Friborg on Thursday, the right side was lucky to see Terrier dzone. He does not abuse it to endanger offensively. He comes out without a card while his sole on Truffert should have been penalized. Replace the 81st with Sebastien Corchia (not not).

Jean-Charles Castelletto (3.5): after a bad fall in the first period, the central defender seemed close to the exit. Reduced or not, he was able to stay on the field but couldn’t slow down Rennes’ few good moves in the middle, the image of Terrier’s goal action.

Nicolas Pallois (4.5): As usual, the ex-Bordeaux player did not spare his opponents. His authoritarian interventions sometimes went to extremes. He can look forward to his good rescue on Terrier’s attempt. But he sometimes lacked accuracy in his passes.

Quentin Merlin (3): Known for his counter-attacking qualities, left-back Simon left Simon to his own devices. It must be said that he was sufficiently preoccupied with the movements led by the Rennais at his side.

Samuel Moutoussamy (4): After a big start in intensity, the midfielder ran in a vacuum for a long time. He showed more when he came back from the locker room and split the game better. Replaced the 71st with Ignatius Ganago (not not).

Chirivella (3): three days after his fatal slip in Freiburg, the Spaniard almost did it again. His clumsiness could have resulted in an own goal or an assist for Gouiri. Apart from this situation, he failed to relieve his team in the first period and then lacked creativity.

Ludovic Blas (4.5): that’s how it feels, the leader is longing for a goal. We saw him try his luck twice at the start of the game, then at the end of the game with a very well placed free kick. Frustrated, he had very few good balls to negotiate.

Moussa Sissoko (2): Far from his best level since his arrival, the French international is once again confirming his poor form. He clearly didn’t have the legs to win duels in midfield, let alone break through the lines, as he was so good at it. His center in the clouds sums up his match pretty well…Replaced the 81st with Evann Guessand (not not).

Moses Simon (3): after an interesting start with percussion on his court, the Nantes winger was muzzled. Good balls were rare in his defense.

Mostafa Mohamed (5): never served near the opposing team’s goal, the Egyptian striker had the merit of fighting on all his balls. He obviously didn’t win all of his duels. But his fighting spirit caused Rodon’s foul and red card.