Home » The coronation of van der Poel, a record marathon of Paris, Imperial Carlos Alcaraz… What to remember from the sports weekend 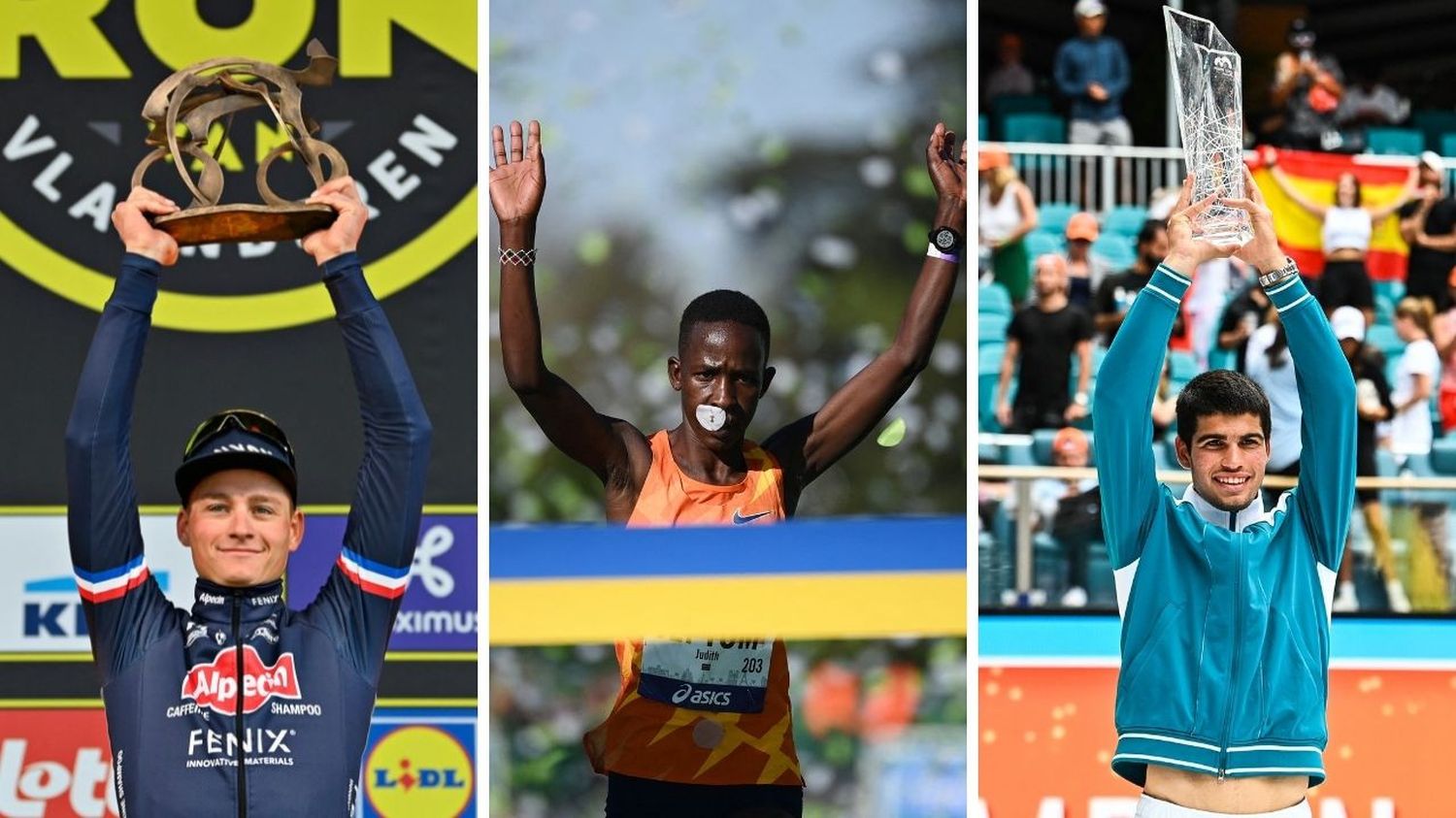 Records at the Paris marathon, a duel at the top on the Flemish mountains, the new generation of tennis emerging in Miami… The sporty weekend was crisscrossed by a fresh wind, but also by tornadoes outside the frame of the Blues of the XV of France, who scattered the Irish. On the other hand, events in MotoGP were less favorable for the French.

Tour of Flanders: the boss is van der Poel

It has become a regular scene for three years now. Almost a tradition, which is gradually gaining a foothold with the arrival of the Tour of Flanders. Each time two runners arrive escaping the rest of the competitors. The two protagonists look at each other, mistrust each other, hesitate for a long time before starting the final sprint. And every time Mathieu Van der Poel (Alpecin-Fenix) is one of those two.

In 2020, this scenario would have enabled the Dutchman to triumph over his eternal rival, Wout Van Aert. In 2021, Raymond Poulidor’s grandson was surprised in reverse by the Dane Kasper Asgreen. What would happen to the 2022 edition? This time it was Tadej Pogacar – who was discovering the Ronde – who accompanied van der Poel, winner of a sprint in which Dylan Van Baarle (2nd) and Valentin Madouas (3rd) were eventually able to participate.

The French take a nice place of honor there, after they are the only ones holding the wheel of the two cadors. For van der Poel it is a second victory in three years. Waiting for Paris-Roubaix in two weeks? For the occasion, the Dutchman will find his rival Van Aert, package because of the Covid-19 this Sunday.

Under the Paris sun shone Morhad Amdouni. The French marathoner not only took third place in the men’s race, but he also broke the 19-year-old French record for the distance. To wipe out Benoît Zwierzchiewski’s 2h06’36” set up in 2003 in similar weather conditions, Amdouni completed the 42.125km in 2h05’22. This is the 4th best European performance of all time.

Historically, however, this was not enough for Amdouni to win. A few meters in front of him, the Ethiopians Deso Gelmisa (2h05’07”) and Seifu Tura (2h05’10”) battled for the victory in the sprint. Among the women, it was Kenyan Judith Jeptum who won and also broke a record: that of the event, founded in 2017 by Purity Rionoripo (2h20’55”). Running in 2h19’48”, Jeptum achieved a sweep last time after starting alone on the 28th kilometer. But she also improved her personal best by almost three minutes.

After a year marked by psychological problems, Naomi Osaka was unable to do anything against Iga Swiatek in the Miami Open final. In this match that resembles a transfer of power between a former world No. 1 and the new one, Osaka scored just four games, swept away 6-4, 6-0. The Pole takes a third tournament in a row, after Doha and Indian Wells.

Among the men, it was a young 18-year-old Spanish phenomenon who won the day: Carlos Alcaraz. The youngest winner in Miami history, Norwegian Casper Ruud defeated Norwegian Casper Ruud 7-5, 6-4 in a controversial final. This is already the third tournament that the Spanish prodigy, the designated successor to Nadal, has won.

Unstoppable. For the second game in the Six Nations tournament, France’s women’s XV crushed Ireland in Toulouse on Saturday. Final score: 40 to 5, with the offensive bonus point as a bonus for the Blues who scored six tries. After a messy first game against Italy, the Tricolores found their skills with the ball in hand. But not alone. At the foot, in touch and even in scrum: the French flew over the meeting.

In front of 11,000 spectators, Annick Hayraud’s players won with style. Ideally a week before the first trip of this 2022 tournament, to Scotland, at the end of the week. Like the Welsh and the English, the XV of France thus had two successes in as many matches. The last time this happened for Les Bleues was in 2018, a year in which Les Tricolores succeeded in the Grand Slam…

French MotoGP World Champion Fabio Quartararo, who started sixth in the Argentina GP, will not keep an indelible memory of his weekend across the Atlantic. The Yamaha rider couldn’t do better than eighth. It was Spaniard Aleix Espargaro (Aprilia) who won the race, and at the same time the first victory of his career.

And as things are going well, it’s also his team’s first in MotoGP, back since 2015. After three GPs this season, we especially note that nine riders have managed to finish on the podium. Difficult to make indecisive.