Home » Tow truck on its way to Japanese GP: “I can’t believe it”, Pierre Gasly and the drivers’ enormous fear 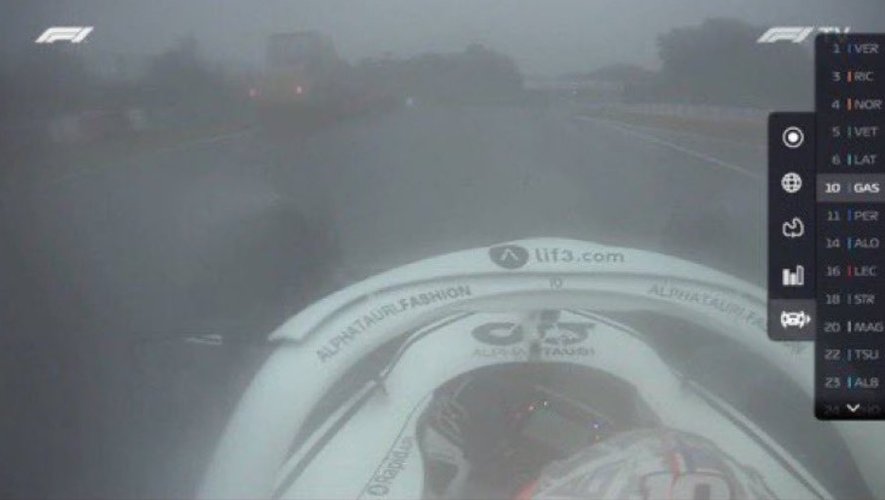 During the Japanese Formula 1 Grand Prix, a recovery vehicle was seen on the track, which was interrupted on the third lap due to rain, according to images from F1TV.

In these images, which are widely used on social networks, the Frenchman Pierre Gasly (AlphaTauri) passes next to a truck indicated by its flashing light when the rainy conditions are very difficult for the pilots. An incident that infuriated the French: “It’s unacceptable! How is it possible? I can’t believe it”.

The incident, described as “worse than unacceptable” by Alfa Romeo team director Frédéric Vasseur, happened on lap two under a red flag as the drivers were driving to return to the pits.

The race was interrupted due to the circumstances and to allow the evacuation of the single-seaters of two drivers who were retiring: Thai Alex Albon (Williams) due to mechanical problems and Spaniard Carlos Sainz (Ferrari) following an accident

“We risk our lives”

We could then see Gasly very upset in his garage by this event, which recalls the accident that had caused the death of Frenchman Jules Bianchi in Japan, at the age of 25, on the same track.

Hopes for French F1, the young man saw his trajectory abruptly interrupted on October 5, 2014, at the 42nd round of the Japanese GP. In the rain, he lost control of his Marussia at Turn 7 and his single-seater became trapped under a hitch that eventually evacuated the Sauber of German Adrian Sutil, who left the track on the previous lap.

Back in France, Jules Bianchi died after several months in a coma in his hometown of Nice, in 2015. Bianchi was the sporting godfather of Charles Leclerc, the Ferrari driver. “No respect for the lives of the pilots, no respect for the memory of Jules, unbelievable,” his father Philippe Bianchi wrote on Instagram, a screenshot of the incident in support.

“+WTF+. How could this happen? We lost a life in this situation a few years ago. We are risking our lives, especially in these conditions. We want to race. But this… Unacceptable,” tweeted for him from the British McLaren driver Lando Norris.

wtf. How did this happen!? In this situation we lost a life years ago. We risk our lives, especially in circumstances like these. We want to race. But this… Unacceptable.

“We couldn’t see anything (…) I was surprised that the start was given, it was dangerous (…) We are playing with fire, I guarantee you there will be crashes if we start again in these conditions there”, also responded to Canal + Alex Albon after its shutdown. Two hours after the first start at 2 pm local (7 am French), there was no time for a new start.