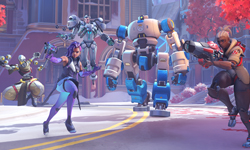 Most startup problemsOverwatch 2 have now been fixed and the developers will share an update on the current situation in a post tonight, after three maintenance works have taken place in the past two nights. Find the details below.

The change to the phone number requirement is now in effect. As mentioned earlier this week, this means that the majority of console gamers (who already overwatch logged into a Battle.net account, which all console players who have played since June 9, 2021 no longer need it. PC gamers who have already played overwatch don’t need it anymore. If you have an active SMS protection request but no longer need it because of this change, close it to reduce technical support queues.

Friday’s maintenance helped resolve two issues: the first was to implement fixes for some bugs related to account merge and login, and the second was to improve the databases. This resulted in a fourfold increase in capacity and a reduction in queues. The developers are keeping an eye on this, especially as we approach the weekend when more players will log in – early signs are positive, but the team will be watching closely.

The developers have made progress on this and believe they have a working solution to the common issues. Some players who have merged their accounts should now see a full collection, but several are still queuing up, and more will be after logging in over the weekend. As mentioned before, your collection will not be lost and with improvements in the database, these merges are now faster.

Console players who purchased the Observatory Pack may not see available items – while some players had this issue on Xbox, it mostly affected PlayStation. The developers have implemented a fix with tonight’s maintenance.

The developers fixed most of these issues with Friday’s patches, but the issue persisted for a small number of players who still saw this bug, preventing logins. The developers also rolled out a fix for tonight’s maintenance.

As the capacity has increased and the player average is higher, matchmaking systems are affected, meaning you may have to wait a while before being placed in a game. The developers have been making changes to this over the past few hours to mitigate this and will continue to monitor the matchmaking queues over the weekend to identify any further improvements that can be made.

The team gathered feedback on crashes that occurred in various situations. Fixes have been implemented in the past hours.

Blizzard knows that the launch experience has been frustrating for many players in the community and thanks them for their patience and support as the developers improve the experience.Overwatch 2 for everyone.