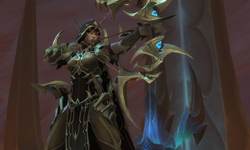 In a post published last night, Scariizard goes into detail about several experiments the developers plan to set up for raid loot with Season 4 of shadow countries† Find all the details below.

As we move from class sets and the Creation Catalyst from Patch 9.2 to dragon flight, the developers are thinking about the philosophy of rewards, including how to acquire loot and how this can be improved. Season 4 offers a unique opportunity to try out some experimental changes that might be too fleeting for a regular season, but provide data and feedback that can be used to improve the game in the long run.

It is important to clarify that the systems that will be discussed today are designed around the specific objectives of the shorter Season 4. It is possible that, even if well received, there will be significant changes to the pace and expected to match the progress of a normal content season. Nevertheless, the team wants to show that it is interested in approaching rewards from different angles, listening to players’ wishes for more protection against bad luck and making sure that in-game rewards match the player’s efforts.

Season 4 will feature a trio of Trader vendors near the Great Vault. Each of these merchants has goods from one of the three raids of shadow countries : Château Nathria, the Sanctuary of Domination and the Tomb of the Founders. The latter sell jewelry, weapons, and other special items from their respective raids. Each of these items has the same price: one Puzzling Cartel Dinar each, with a specificity. You can only get 3 puzzling karteldinars for the entire season. After you spend your last dinar, merchants leave the city and take their goods with them. Items sold by these sellers are from the regular Season 4 “Fated” range, 278-285, depending on the item.

To get it, raid . in shadow countries after the start of season 4 to begin a three-part quest. These quests require killing some unique Fated bosses while the Season 4 raid affix is ​​active. These quests provide a puzzling cartel dinar upon completion and progress to the next part of the quest. (Killing the same boss in the same week doesn’t make any progress – killing the Naphtremens on Normal and Heroic in the same week only gives you one win). At the moment this one asks for 30 wins, 20 wins and 10 wins, making your second and third coin faster over time – week 3 is the fastest possible to receive a dinar and week 6 the fastest possible to receive the latter. †

This system originally came to reduce the rotating nature of Season 4’s spokes. Each player is less likely to see individual loot pieces when Sylvanas Fated or Jailer Fated can only be killed once every three weeks, and the developers want to see how players react to this idea of ​​having a limited but fixed way to aim to individual rooms in raids. Everyone has spent months and months killing a specific boss every week without seeing the desired item drop, and the developers hope this system will solve extremely bad luck in the worst case scenario. At the same time, the team doesn’t want any shortcuts to the gameplay experience – it shouldn’t be possible for players to just buy the best item for a slot through a retailer in week 1 of a season – and it’s entirely possible that this implementation will undermine some of your character progress. That said, the developers have heard the wishes for such a system and believe Season 4 is the right time to give it a try.

Next, the developers explore ways raiders can improve raid loot as they pass through difficulty settings. In Season 4, killing bosses on Heroic and Mythical difficulties will drop a ‘fragment’ of an upgrade item, and when you’ve had enough (currently 20), these will combine to create a Heroic or Fateful Gear. upgrade. Mythical respectively. Unlike the puzzling cartel dinar discussed above, a quest that you must complete to earn it over time, these buff shards will start falling at a drop percentage on the first day of the season of 100%. , so you can make progress every week from scratch. These enhancement items will work on any item with the Fated tag, including items sold by the aforementioned Trader suppliers. This upgrade system combined with Puzzling Cartel Dinar suppliers allows players to purchase three Heroic or Mythic raid gear, if you complete enough difficult content to build a stash of upgrade shards.

While the heroic or mythical buff item still requires the base item to fall in front of you somehow, this means that the option to perform other raid difficulty to get the desired piece is available to players who want to progress further. to go. In addition, it gives guilds that start at Normal and upgrade to Heroic, or Heroic and upgrade to Mythic, the ability to keep some of their favorite items with them as they level up. Often, if a guild can’t pass a specific point as it progresses (a new boss or a Great Vault threshold), the time it takes to raid again to that pass can seem like a wasted effort. The developers hope this system will add more value to killing bosses with your party, while also allowing those playing on higher difficulty levels (such as a guild that can only do 3 mythical bosses per week) to ‘save’ for a while. ‘ of excitement that both rewards effort over time, and makes progress toward completing your raid objectives easier.

Season 4 is an exciting time with the team trying many things WoW has never done before and the developers can’t wait to see how these systems work for raiders with the Fated affix at launch.

What about class sets?

Class sets from Patch 9.2 are still active in Season 4, and the Creation Catalyst remains active with all costs added up. Tokens will not be added to Castle Nathria and Sanctum of Domination, as you can upgrade each item obtained to a particular piece of a higher item level as is currently possible.

Shards and Domination buffs will be completely disabled for Season 4. The developers didn’t want to put any additional pressure on Sanctum Fated’s balance, and there was enough difference between classes and armor types that Specializations and Classes could potentially carry a 3-piece Domination bonus and their 4 piece unlike others that would cause an imbalance during these weeks. The developers have also received feedback indicating that it would be unfair for players who have not kept Domination gear to be disadvantaged in this way.

In addition, World Bosses associated with the current Fated raids will also scale – harder and give item level 285 Fated gear.

Why only weapons and jewelry?

These systems are not intended to replace the primary method of obtaining gear – having all raids in a set at the current item level is something completely new to WoW and will create a lot of powerful item combinations as well as a lot of frustration if you don’t receive them . The developers wanted suppliers to focus on loot pieces that have more impact on players and give negative feedback. Many players feel that if they can’t get Night’s Edge, they won’t be able to play Rogue in 9.1/9.2. This is rarely the case with boots or bracelets. Focusing on those high-level items makes those suppliers special, and the system focuses on that protection, rather than being an alternative/replacement method of acceleration (which it isn’t).

A current question is the integration of this system via the Great Vault tokens. While the devs aren’t currently interested in providing a higher number of Dinars during the season, somehow offering heroic or mythical buff shards could very well be possible, but the team wants to make sure you only heroic or mythical upgrades can buy shards if you do a minimum of raids on those difficulties. No guarantees, but it’s not impossible.

The latter do not improve linearly. If you have a Heroic upgrade item, the Raid Finder or Normal item is needed and it becomes Heroic. Likewise, if you have a Mythic buff item, you can target a Raid Finder, Normal OR Heroic item, and it will turn into Mythic. These don’t have to be OK – Mythic raiders can ignore Heroic if they want to.