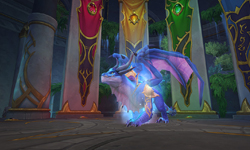 As Zahko reported overnight, a first test session of Mythic+ dungeons from dragon flight takes place in the Closed Beta this weekend. This one started a few hours ago and will end at 1am on Tuesday. Two dungeons are accessible, Pools of Ruby Essence and Vault of Azure, as well as a prototype of the new addition, Thundering.

Several changes are coming to Mythic+ mode dragon flight, and the developers are sharing details about it today. Please note that nothing is final yet.

If you’ve done Mythic+ in multiple seasons, you can search the dungeon again and again for an item and do the same in the next season. It’s not a good experience and the developers want to do something about it.

Of dragon flight, all dungeons will be rotated each season. This will improve the experience by:

The nice thing about Mythic+ is that you get better in a dungeon with experience, but the opportunities to learn and improve become scarcer the longer a dungeon is active.

Learning a new raid can be fun, but the relative ease of completing Mythic+ dungeons that everyone mastered last season can create a lot of social pressure to spend time in Mythic+ preparing, even if it’s is not your favorite activity.

Imagine taking a break from Season 1 and coming back in Season 2, joining a Mythic+ group and feeling like you’re holding them back because everyone knows a strategy you haven’t been able to learn yet. With dungeons rotating every season, everyone starts at a relatively equal level and learns new strategies together.

Mythic+ affixes have been around for years. What purposes do they serve and why do developers create new ones?

As interesting as the seasonal affixes are, there are also limitations. Due to their relatively high complexity and strong seasonal tires, these are usually lost after the season. While they have experimental value, long-term affixes don’t contribute as much to Mythic+ as the team would like.

A side effect of the advent of dungeon rotation is the alleviation of the pressure that the season affix is ​​the “most important” transforming your gameplay into a new season, giving developers the opportunity to think about what that might be next. Should the team try to create affixes that can become regular in future seasons? Should they be set aside in favor of something else? Many options can be considered.

An experimental version of the seasonal affix, Thundering, is available on the beta. This one will still get a lot of iterations and it will probably change the way it works, but it gives some insight into the level of complexity developers would like to see in dragon flight. Since you’ll already be learning a new set of dungeons, seasonal affixes can be less complicated and more themed (while still offering room to try new things).

You will also notice the reduction in the amount of “temporary power” offered by seasonal affixes. While the feedback for affixes with beneficial effects has been positive and the developers are still eager to explore this, a high level of potency has been achieved with shadow countrieswhich contributed greatly to the effect described above.

The developers will monitor the feedback during the testing sessions and may try other directions if it doesn’t work as well as expected. For example, there is a world where the beneficial effects are close to shadow countries, but also make enemies harder to compensate for that extra power. The team will continue to experiment with Mythic+ and hope that players will enjoy a greater difference in experience with each season of dragon flight.

Of shadow countriesthe developers have observed a trend where players who have mastered a series of Mythic+ dungeons short-circuit their sense of progression in subsequent seasons.

It’s a complex issue that ties into many of the topics above, but something is lost if the best gear you can get in Mythic+ isn’t necessarily something you get by investing the time and effort to get really good at it. difficulty.

That’s not to say the developers want to make Mythic+ any less rewarding. It is one of the pillars of the endgame of World of Warcraft and dedicated players should have access to competitive rewards.

The developers want Mythic+ to have more of a sense of progression as you level up in keys, and for the gear you get to reflect that. Two major changes will be made.

The impact of this change isn’t drastic, but should help give each stage a deeper sense of progression and make it easier for developers to ramp up the rewards.

The developers are also introducing an additional Valor upgrade level, which will increase the maximum item level of Valor upgrades that players can unlock with the higher Mythic+ ratings.

A number of regular affixes are set aside and the number of weeks in the affix rotation is reduced.

In season 1 of dragon flight, the Inspiring and Necrotic affixes take a break and the affix rotation is reduced from 12 weeks to 10 weeks. Several objectives for this change.

The developers are excited to see the outcome and can’t wait to try out additional changes in Season 2 and beyond. While it’s too early to guarantee anything, this could include changes such as swapping additional affixes, the level at which different affix types become active, or maybe even trying a new category of affixes.