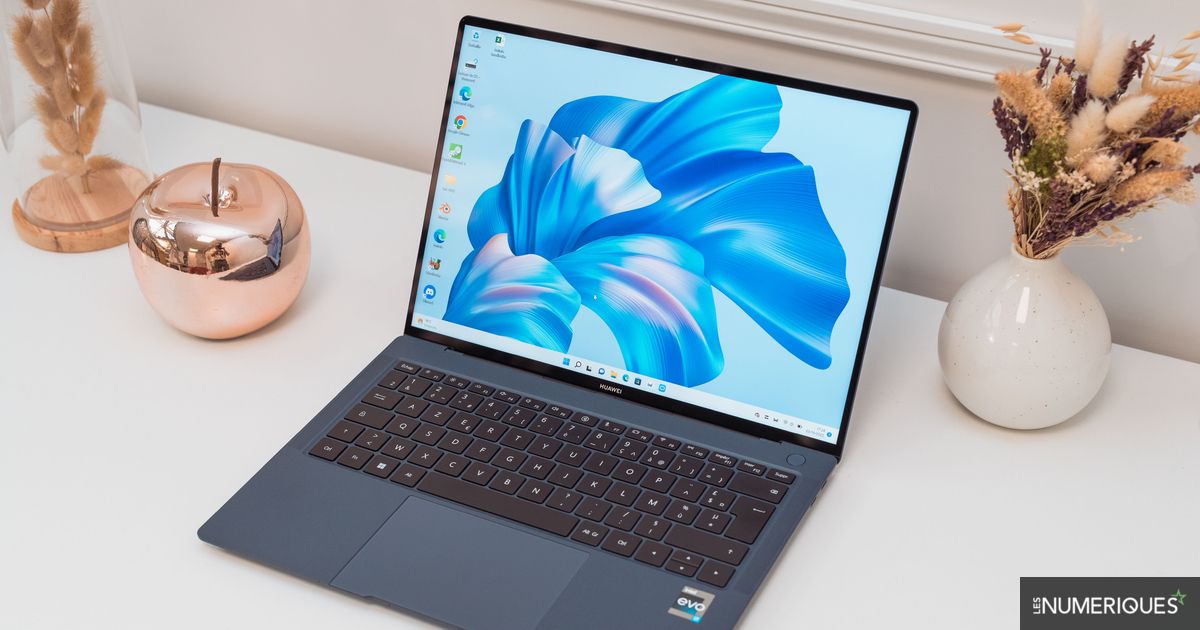 We can only pay tribute to Huawei’s efforts to take care of its computer. We have nothing to complain about the quality of the finishes or this blue that changes from the classic metallic grey. The matte finish of the magnesium ultimately retains relatively few fingerprints, unlike many dark PCs. The ultra-thin bezels are still present on the screen, which is also very noticeable, bringing the occupancy rate to 91%; one of the best on the market.

The keys on the keyboard are slightly raised and typing is pleasant. By the way, the backlight can be adjusted to 3 levels, but it is mainly the “Free Touch” touchpad that benefits from many new functions. Huawei has indeed assigned a whole host of features to it: by sliding a finger over the left edge you can increase the brightness, on the right to increase the volume and at the top to scroll through a video. The haptic feedback that a gear simulates when the finger performs these movements is quite impressive – these classic functions remain available on the F1 to F6 keys of the keyboard. Double tapping with a knuckle makes it possible to take a screenshot otherwise, which is very practical; and doing it with two knuckles will start the video recording of the screen. Finally, pressing the top left corner minimizes the active window; doing the same on the right will close it. In the end, some of these shortcuts are interesting (like screen recording or window manager), even if they aren’t essential. It will mainly be necessary to get used to using it rather than going through the keyboard or mouse pointer.

The power button features a fingerprint sensor and the webcam also offers quick unlock via Windows Hello. It’s no longer at the keyboard – finally! — but it only films in 720p, which is really disappointing for a high-end laptop, especially since Huawei promotes video conferencing with the presence of 4 microphones and new speakers. The image is noise, even in good lighting conditions, and even more so in the shadows.

On the connector side, there are two USB-C Thunderbolt 4 ports on the left and 2 USB-C 3.2 Gen 2 ports on the right. This allows you to connect many peripherals, of course, but only in USB-C. Fortunately, the manufacturer supplies a USB-A adapter, but we preferred the MateDock that came with it in 2021, which notably offered an HDMI port. The wireless connection is provided by Wi-Fi 6E and Bluetooth 5.2.

To access the components you need to remove 8 screws, but Huawei didn’t make it easy: 6 are Torx screws and 2 are Phillips screws hidden under the rubber feet glued firmly under the chassis. It is then not so easy to disassemble the frame. Once this is done, the M.2 SSD or battery can be replaced if necessary, soldering the RAM.

Despite its finesse, the PC does not heat up much. For example, we noted a temperature peak of 41°C in the middle of the keyboard. For noise, ventilation never starts in office automation, but demanding software causes it to reach 34 dB, which is audible, but quite limited.

The Intel Core i7-1165G7 with the limited TDP that equipped the MateBook X Pro from 2021 makes way for a Core i7-1260P equipped with 12 cores (4 performance cores and 8 efficient cores) clocked at up to 4.7 GHz in turbo mode . The thermal envelope increases to 28W and is now joined by 16GB DDR5 RAM, but still 1TB SSD.

This Core i7-1260P did very well in our synthetic and application tests. With a CPU rating of 124, it proved to be faster than most other PCs tested and equipped with a processor equivalent to a Core i7-1280P or a MacBook Pro M2. It easily outperforms the MacBook Air M2 and the Ryzen 7 6800U of the Zenbook S13 Oledfrom Asus and can handle any demanding task.

Note that here we have activated the Performance mode thanks to the combination “Fn + P”. On the other PCs of the brand we had not seen a big difference once this mode was activated, but this time the gain is noticeable in certain applications and offers about 14% more performance in total! However, this mode only works when the PC is connected to the mains; remember that AMD and Intel processors are much less efficient anyway when a PC is running on battery power; only Apple does well in this area. Unless you want to limit the noise from the ventilation, we see no reason to disable this feature.

To play you will have to limit yourself to less greedy or old titles as the computer does not have a dedicated graphics card and the integrated Intel Iris Xe is not very effective in this area. Finally, the SSD delivers decent speeds (3.4 GB/s in reading and 2.6 GB/s in writing), but it remains far from the best models (twice as fast).

Huawei has not skimped on its 14.2-inch touchscreen, which now displays high definition (3120 x 2080 px), refreshed at 90 Hz and a 3:2 format that allows for greater working height. The default monitor setting is fine, but if you want higher color fidelity you should choose the hidden sRGB profile in the display manager by right clicking on the desktop.

The properties of the panel are therefore excellent, with a high maximum brightness (561 cd/m²) and an exemplary color precision. The average color temperature is thus measured at 6600 K and the delta E at 1.8. The major defect of the touchscreens has been remedied here by Huawei thanks to an effective anti-glare treatment. The reflection is thus only 28.6%, so very good, but still higher than that of matte tiles. The screen only sins with its contrast ratio of 1350:1, which remains average, but far from OLED panels. The retentivity of 23 ms is also high, even if it does not affect the office automation.

Light (1.2 kg) and thin (15 mm), the Huawei MateBook X Pro 2022 is easy to transport. The 90W block charger is relatively compact and weighs only 237g. This allows you to quickly charge the laptop via the USB-C cable.

And this charger will probably be used quite often. Indeed, during our autonomy test (video playback on Netflix, brightness at 200 cd / m², headphones connected, volume at 50% and Bluetooth off), the Huawei laptop lasted only 6 hours 32 minutes. This is probably due to the battery of only 60 Wh and the high definition of the screen, which also works with a refresh rate of 90 Hz, but the result is disappointing, especially for a high-end model. It is therefore far behind its most efficient competitors, which have more than 10 hours of autonomy, not to mention the MacBook Air and Pro M1 and M2 (more than 13 hours).