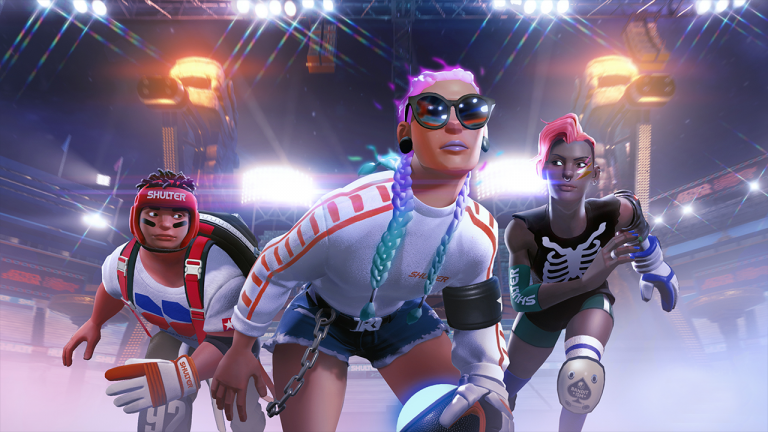 Officially announced at E3 2019, Roller Champions has had a bumpy production. Developed by Ubisoft Montreal with the help of Winnipeg and Pune, the arcade-oriented sports software was first planned for 2020, before being pushed back to 2021. It is finally in 2022 that this funny game of inline skates will arrive. Often compared to Rocket League, the Ubisoft title also plays the card of simplicity for instant fun. It remains to be seen if he has the right formula to achieve success as well. A few days before release, we’re taking stock of Roller Champions.

What is Roller Champions? What are the rules?

Roller champions is an arcade-oriented sports game with easy-to-learn rules and controls so that everyone can have fun quickly. Designed for multiplayer, it features two teams of three athletes on roller skates to compete in a circular arena.† The principle is simple: you have to catch a ball and then go through four gates in the stadium so that your team maintains control of the ball. Once the small carousel is completed, a high target will open. The player who manages to throw the ball in offers his team a point. The first team to score five points wins. But be careful, the more a team manages to circle the stadium (by activating the 4 gates) before it scores, the more points it scores. This means that if a team makes three full turns (12 gates activated), it will immediately score 5 points when it places the ball in the basket. Of course, if the opposing team intercepts the ball, the round count is reset (and the goal is closed).

What are the specifics of the gameplay?

Within the arena where the six players fight for control of the ball, a handful of moves are available that must be performed according to the situations they encounter. In defense, a good little tackle from the families is strongly encouraged to make the opponent lose the ball. In attack, dodge, dive and of course the pass you can avoid enemy attacks† At a high level, only teams that brilliantly combine these techniques will succeed in beating their opponents. Since the stadium track is curved, it is advisable to increase speed on the descents and pass the ball using the rebound on the walls. Finally, it is possible to lean on the back of a teammate. This has the effect of sending the avatar into the air, bringing it closer to the target.

Roller Champions offers 5 game modes: the first is Training, which, as the name suggests, offers the opportunity to perfect your playing style in a special map composed of various obstacles. The second is Quick Match, where players of the same level compete against each other via the matchmaker. Unsurprisingly, there are also custom games on the program to create your own sessions through various options (teams, bots, arena, voice chat). The fourth mode is ranked games, to climb the ranks and go from “garage” to “elite champion”. Finally, game service requires that temporary modes will land regularly to maintain fan interest†

Is it possible to personalize your athlete?

Yes, Roller Champions has an option that gives access to customize his avatar. Customization enthusiasts will be happy to know that they can change outfits (helmet, skates, gloves, jumpsuit), banners, titles, emotes and even special effects when scoring a goal.

What is his business model?

Ubisoft’s app is free to play† It is therefore free to download, but has elements within its universe that can be purchased with real money. When Roller Champions goes live, there will be a first season with a Roller Pass with 41 cosmetic rewards. Some items can be unlocked for free by playing the game, gaining fans and completing sponsor challenges.

When and on which machines will Roller Champions be available?

Roller Champions coming to PC, PlayStation 4, Xbox One, PlayStation 5 and Xbox Series X|S on May 25, 2022† Good news, Ubisoft’s title is cross-play and cross-progression. The French publisher indicates that his game will slide a little later on other platforms such as the Switch, Stadia, Amazon Luna, iOS and Android.