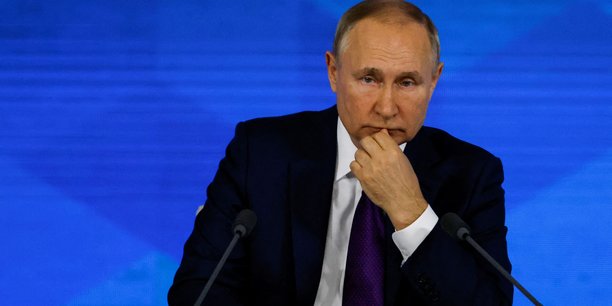 The European Union and the United States, their allies, the entire Western camp – with a few notable exceptions such as Hungary

— have already fired four rounds of increasingly tough sanctions on Russia’s economic apparatus since its invasion of Ukraine and, finally, cracks are beginning to appear in the walls of the Kremlin’s beleaguered fortress, according to data released Wednesday.

One of the first sanctions was that many multinationals had decided to close their shops in Russia, announcements made with great fanfare, but so far without major measurable effects on the real economy. And this apparent insensitivity wasn’t due to the maintenance of wages during the lockout, as the foreign groups that set it up, such as McDonald’s for its 62,000 temporarily unemployed workers, are extremely rare.

But finally, after several weeks of salvos of sanctions that have crescended since the start of the Russian offensive in Ukraine, clear signs are emerging.

On Wednesday, the Russian Ministry of Finance announced that it had settled a debt of nearly $650 million in rubles because a foreign bank refused to make the payment in dollars.

The United States tries to force Russia into default

Although the US Treasury Department has so far allowed Russia to use its foreign currency reserves – and thus dollars – held in US banks to pay its foreign debt in dollars, it has tightened sanctions this week after the atrocities of Boutcha, by no longer accepting dollars stored by Moscow in American banks.Russia now has as it should be

a grace period of 30 days before the payment arrears are formally declared by the credit rating agencies. The latter have already warned of an “imminent” default by Russia.

For several weeks, Russia has managed to avert the danger of bankruptcy, but this time it is over. Evidence that the situation is critical: the Russian Ministry of Finance responded today by warning creditors of “enemy countries” (see, for example, Russian gas customers): the money will be returned to them in rubles deposited into a Russian account, and it will be able to convert these rubles only on the condition that Russian funds are released abroad. The Kremlin spokesman also gave his vote:“There is no basis for a real mistake” said Dmitri Peskov, questioned at a press conference on Wednesday, confirming that

“Russia has all the necessary resources to pay its debts”.True, the ruler of the Kremlin himself had warned on March 16 about the invincibility of the Russian economy ( “Yes, it is not easy for us at the moment”, but “it is not possible to blitzkrieg

against Russia”), but today nothing is less certain.

Indeed, according to Blue Bay Asset analyst Timothy Ash, contacted by AFP, “it is difficult for Russia to avoid a sovereign default”:

“A default is a default. The markets will judge it that way. Investors have not been paid. They will remember” (…) A default may not immediately collapse the Russian markets and economy, but will have devastating consequences in the longer term have ”, specified this economist, who foresees, among other things, “an impact on investment, growth, standard of living”.

“Putin has impoverished Russia for years. †

Another striking figure: new car sales fell 62.9% in one year in March today, reflecting a remote sector, with countries in the western camp, in particular, decreasing the export of loose goods to Russia. documents prohibited.

Many manufacturers have also announced that they will stop selling parts or cars to Russia, such as Audi, Honda, Jaguar or Porsche. Others have announced the cessation of production, such as Renault, BMW, Ford, Hyundai, Mercedes, Volkswagen or Volvo.

The factories of Avtovaz (Renault-Nissan group), the largest car manufacturer in Russia, which employs tens of thousands of people, are almost closed due to a shortage of imported parts.

According to data from Avtostat, cited by Kommersant, new car prices rose by an average of 40% in March and up to 60% for more expensive cars, whose supply is also limited by logistical problems and not fines.

3. Inflation is rising, but the real crisis won’t happen until this summer

Alexeï Vedev, an associate researcher at the Gaidar Institute of Ranepa University in Moscow, estimates that this will be around 20% annually, after exceeding 9% in a year in February.

“It was a month of panic among consumers,” who rushed to products they foresee the disappearance, he says. “As the situation stabilizes, the objective processes at work will become clearer.” And according to Andrei Yakovlev of the Moscow Higher School of Economics, the real crisis will not reach the real economy until this summer or autumn: “in May, a large number of companies will probably close”

lack of imported parts, especially in the auto industry where hundreds of thousands of people work.

Hungary lets go of EU and says it is willing to pay Russian gas in rubles First countries to break the ranks of European unity, while the

26 EU member states are trying by all means to put pressure on Russia to stop the invasion of Ukraine, Hungary said on Wednesday it would be willing to pay Russian gas in rubles if necessary.

“We see no problem in paying in rubles. If that’s what the Russians want, we will pay in rubles,” Prime Minister Viktor Orban said at a press conference in Budapest.

Moscow has threatened to cut gas supplies to ‘unfriendly’ countries that refuse to pay in rubles, a move that would particularly affect the highly dependent EU.

The European Commission on Tuesday proposed to the Twenty-seven to tighten sanctions against Moscow by halting their purchases of Russian coal, which represent 45% of EU imports, and by closing European ports to Russian ships. But a possible embargo on Russian oil (25% of European oil purchases) and Russian gas (45% of EU gas imports) is the subject of fierce debate among member states.

If Budapest is the first to drop the Union, Berlin and Vienna, which are extremely dependent on Russian gas supplies, have already publicly expressed their reluctance.