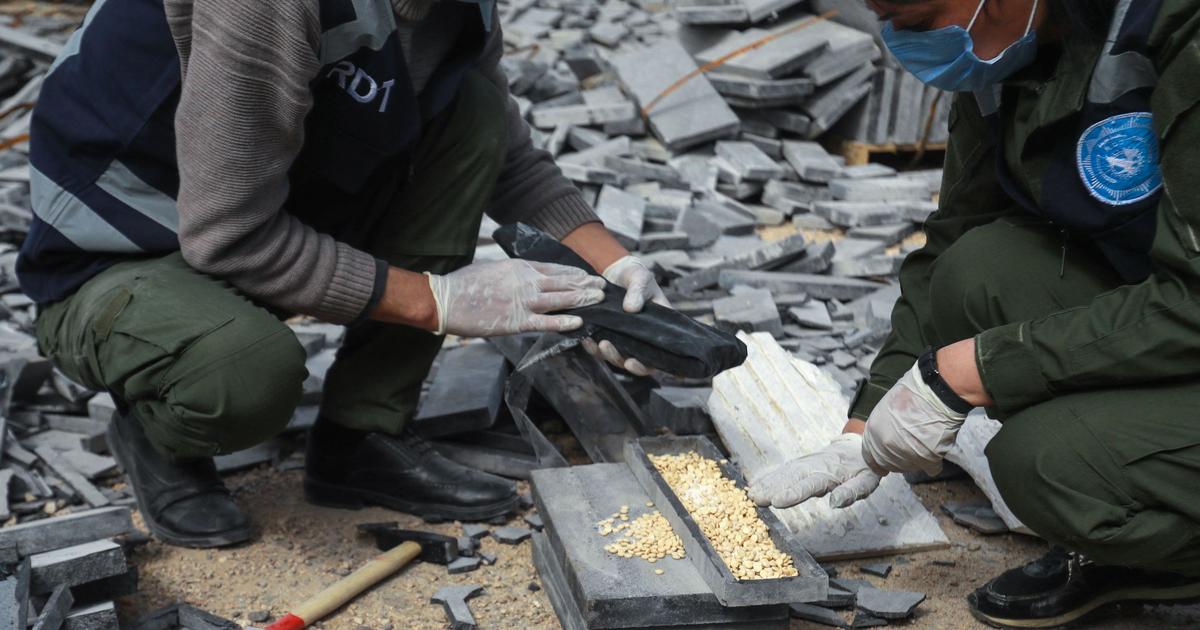 A report published Tuesday emphasizes that the Syrian government, suffocated by international sanctions, “uses the drug trade as a means of political and economic survival.”

Captagon trade in the Middle East reached $5 billion in 2021, due to an exponential increase in a massive illegal trade that poses a growing risk to health and safety in the region, according to a report. . A New Lines Institute study, published on Tuesday, April 5 and seen by AFP, paints an alarming picture of the impact of the explosive production of captagon, an amphetamine derived from an ancient mind-altering drug. “Trade with Captagon is a rapidly growing illicit economy in the Middle East and the Mediterranean”says the report, written by analysts Caroline Rose and Alexander Soderholm.

Read alsoDrug trafficking: how France covered itself with deal points

“On the basis of large-scale foreclosures alone, the potential market value is estimated at more than $5.7 billion by 2021” (about 5.1 billion euros), according to the report. It represents a significant increase compared to an estimate of USD 3.5 billion (about EUR 3.1 billion) in 2020. And reflects only the value of the repossessions, quantified at more than 420 million tablets by the think tank, with many countries no annual statistics release on this. The actual number of pills seized is likely higher, representing only a fraction of the total amount of captagon produced.

Syria is the main producer of captagon and Saudi Arabia is the main consumer. Captagon is sold in the form of a small white tablet with a distinctive logo representing two crescent moons. Captagon is originally a drug marketed in Germany from the early 1960s, whose active ingredient is phenetylline, a synthetic drug of the amphetamine family . Captagon has since been banned and is now the brand name of a drug produced and consumed almost exclusively in the Middle East. It often contains little or no phenetylline and is almost “speed”†

The market value of captagon produced in Syria now far exceeds the country’s legal exports and has earned it the label of a “narco-state”. The New Lines report documents how relatives of President Bashar al-Assad and his regime are involved in the production and smuggling of Captagon. Captagon’s variable formula complicates the fight against this traffic, notes New Lines. Choked by the international sanctions imposed on the regime since the outbreak of the war in Syria in 2011, the government has “uses human trafficking as a means of political and economic survival”according to the report.

Some captagon production units, though smaller, are located in Lebanon, already the world’s third largest hashish exporter after Morocco and Afghanistan. “Lebanon has served as an extension of the Syrian captagon trade, it is a major transit point for captagon flows”, the report says. And figures of the Syrian regime are benefiting from the support of several militias to organize the trade, including the Lebanese Hezbollah, he emphasizes. The Shia group’s areas of influence span a long stretch of the Syrian-Lebanon border, making it a key player in smuggling. “With its experience controlling the production and smuggling of Lebanese cannabis from the southern Beqaa Valley, Hezbollah appears to have played an important supporting role in the captagon trade”says New Lines.

If captagon is only consumed on a small scale in Europe until now, the situation could change. “The variety of effects and usage patterns give it a very broad appeal”, explains AFP Caroline Rose. Captagon is valued as a recreational drug – at more than $20 per pill – by the golden youth of Arabia, but also by users in Syria – where it can be sold for less than a dollar – who need to build jobs to tie ends together. “It could eventually enter the European market and gain market share”emphasizes Caroline Rose.