Home » In Kyrgyzstan, a small town buries a Russian soldier who died in Ukraine 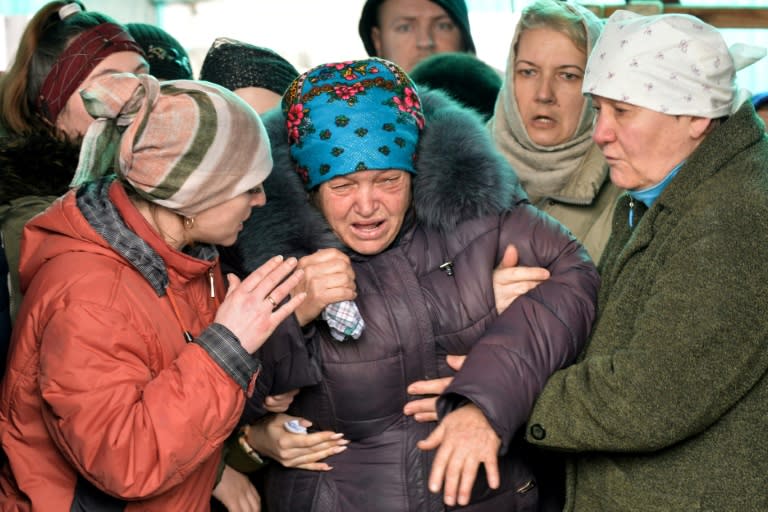 In a small town in Kyrgyzstan, a woman moans as Russian soldiers in blue uniforms lift a coffin. His son was killed in Ukraine, fighting for Russia.

“You always wanted to join the Russian army and look what happened. Where are you going, far from me? Take me with you!” she shouts, as the procession with her son’s body moves away from her house.

Rustam Zarifulin’s funeral in Kara-Balta, an hour’s drive from the Kyrgyz capital Bishkek, was the second of its kind this week in Kyrgyzstan, a poor Central Asian country (population 7 million) on par with Moscow.

Echoes of the Russian war in Ukraine reverberate in the most remote regions of the former Soviet Union.

Moscow, which has been blocking information about the conflict, released the second official estimate of its military losses (1,351 killed) since the invasion began on Feb. 24 on Friday.

Western estimates are much higher. A NATO official named 7,000 to 15,000 Russian soldiers killed in just over a month.

Rustam Zarifulin, who was 26, was born in Kyrgyzstan but joined the Russian army after leaving school. He died on March 14 in Ukraine.

Kara-Balta authorities joined officials from the Russian embassy at the career soldier’s funeral, where an imam led prayers around the coffin as cows strolled carefree through the city’s alleys.

A Russian embassy attaché said the deceased received a medal for his bravery.

While barking and sobbing broke the silence, local officials asked residents attending the ceremony not to speak to the press.

Two days earlier, Egemberdi Dorboyev, another man born in Kyrgyzstan and killed in Ukraine fighting for Russia, had been buried in his native Yssyk-Köl (East).

According to Kyrgyz media, the 19-year-old was summoned in the autumn.

Testimonials are mounting about cases of warring and murdered conscripts in Ukraine – a thorny problem for the Russian government: Dmitry Peskov, the spokesman for Russian President Vladimir Putin, confirmed in March that his boss had asked the state major to “categorically exclude” the conscripts from the conflict and that he will “punish” those responsible for sending them there.

Kara-Balta residents who spoke to AFP spoke about Rustam Zarifulin’s lifelong dream of fighting for the Russian army.

“He said he wanted to defend Russia,” said Nadezhda Ladozhinskaya, a 61-year-old woman who claims to run an organization that represents her fellow Russians.

“Kara-Balta has lost one of his best men”. Timofei Karpenko, 52, says his family joked that his daughter would marry Rustam Zarifulin, whom he knew from a young age.

“When you were near him, he made you want to stand up straight. A real man. A true warrior,’ said Mr. Karpenko in tears.

“I don’t know who is to blame,” Karpenko said of the war in Ukraine, which, according to the United Nations, has already driven 3.8 million people out of the country.

“Some say Putin activated it, others say…” he says without finishing his sentence. “But God sees everything and will pass judgment.”

Instead of Mr. Karpenko’s daughter, the grieving bride’s role fell to a dark-haired young girl who stood next to the distraught mother during the ceremony.

“You were expecting a wedding,” the old woman said to the young one. “But you are on the edge of his grave”.