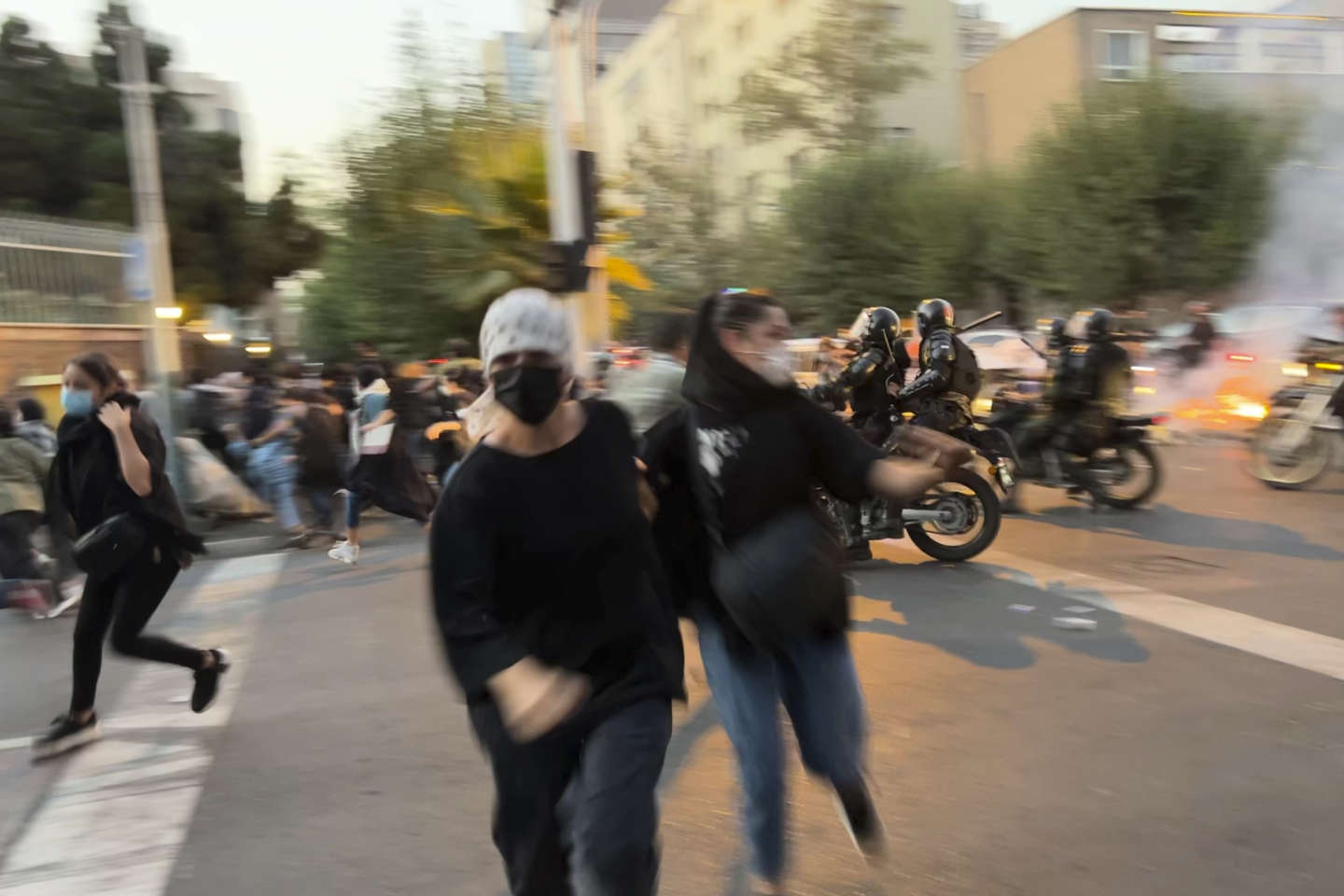 Anti-government protests and demonstrations in Iran have entered their fourth week, with further protests reported on Saturday 8 and Sunday 9 October at several universities in Tehran and in Kurdish-majority areas in the north of the country, where Mahsa came from.

The death of this young woman of 22 years, on September 16 after her arrest by the vice squad for wearing an illegal veil, was the spark that ignited the protest. Since then, daily demonstrations in almost all provinces of the country against religious dress codes and more generally against the theocratic regime have been severely suppressed.

State television was also briefly hacked on Saturday, during the rebroadcast of a speech by Supreme Leader Ali Khamenei. A photo of the Ayatollah surrounded by flames appeared with the sentences for about a quarter of an hour “Join and Stand Up”, “The blood of our youth flows from your claws” as well as a song with the slogan of the Iranian youth uprising, “Woman, life, freedom”.

BREAKING: The Islamic Republic’s state television network hacked during a Khamenei address and the message: “The blood of … https://t.co/7JjLX2D7pM

Also read: Article reserved for our subscribers “Woman, life, freedom”, a slogan that comes from afar

On Saturday, protests took place in the universities of Sharif and Azad, as well as in several neighborhoods and in Tehran’s bazaar, according to the Associated Press. The campus of Sharif, Iran’s main scientific university, has been closed since violent incidents between students and police last weekend.

A video of the demonstrations in Tehran on October 8, broadcast by a journalist from the Point.

“Police forces used tear gas to disperse crowds in dozens of places in Tehran”the official IRNA agency confirmed, without further details, but added that the protesters “spelled slogans and set fire to and damaged public properties, including a police station and trash cans”. A member of the paramilitary militia bassidji was murdered on Saturday “after being seriously injured in the head after an armed attack by a mob”, reports IRNA.

Also read: Article reserved for our subscribers In Iran, mistrust between the population and the regime is growing

“We are all waiting for something to happen, like a ticking time bomb”

The Iranian province of Kurdistan, where Mahsa Amini came from, remains one of the epicenters of the demonstrations for four weeks. According to the Kurdish human rights networka France-based NGO, demonstrations were held Saturday in the capital Sanandaj and the cities of Javanrud, Kamyaran, Bukan and Mahabad, killing two people and arresting fifty-seven others.

Sharo, a 35-year-old academic interviewed by the Associated Press, describes a situation: “tense and fleeting” in Sanandaj. “We are all waiting for something to happen, like a ticking time bomb”, she told the news agency via Telegram, which reports a heavy police presence and a general strike partially blocking the city. The official IRNA agency announced the death of a member of the Revolutionary Guards, the ideological army of the Iranian theocracy, on the streets of the city.

According to Iran Human Rights (IHR), an Oslo-based NGO, at least 92 protesters have been killed and hundreds arrested since September 16. The latest report from the Iranian official media is dated September 27, with a report “about sixty” of death. As for the police, members of the Revolutionary Guards or the Bassidji militia, the death toll reached 14 according to Tehran. The Iranian state has also introduced strict restrictions on internet access to control what it calls “riot”including Instagram and WhatsApp blocks, as well as VPN monitoring.

Also read: Article reserved for our subscribers In Iran, the consciousness of young people: “It is a generation that does not easily accept what is dictated to it”

Iranian president calls on students to be ‘vigilant’

While protests continued in some universities in Tehran, Iranian President Ebrahim Raisi, Al-Zahra, Iran’s first all-female university, denied any involvement by security forces in the death of Mahsa Amini. According to a statement from the Iranian presidency, he told the students:

“The enemy thought they could achieve their goals in the universities, ignoring the fact that our students and professors are vigilant and will not allow the enemy’s false dreams to come true.”

According to a medical report made public on October 7 by the Iranian authorities, Mahsa Amini’s death in custody was linked to a brain disease and not caused by beatings. Shortly after her death, her father assured the FARS agency that his daughter… “in perfect health”.

Supreme Leader Ali Khamenei came out of the silence on October 3rdto say that, according to him, “These riots and insecurity are the work of the United States, the Zionist regime.” [Israël, selon le langage officiel de Téhéran], of their mercenaries and some treacherous Iranians abroad who helped them”.

Le Monde with AP and AFP