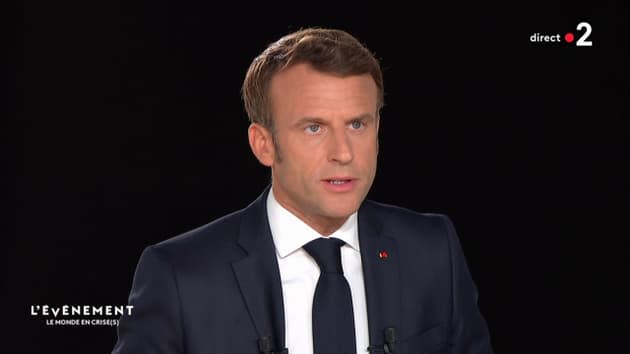 The Belarusian president on Monday announced the deployment of a joint military group with Vladimir Putin, without specifying where or how large it will be.

Belarusian President Alexander Lukashenko will face “problems” at home if he further interferes with Russia’s war in Ukraine, French President Emmanuel Macron warned on Wednesday. “If President Lukashenko decides to go even further into this war, he will do so against the advice of much of his people and he will do so by taking on a responsibility which, I believe, will not be without problems. will be,” he said. the president stated during an interview on France 2.

On Monday, Belarusian President Alexander Lukashenko said he agreed with his Russian counterpart Vladimir Putin about deployment of a military group general, without saying exactly where it will be deployed and what its size will be.

He accused Ukraine and its Polish and Lithuanian allies of preparing “terrorist” attacks and a military “uprising” in Belarus by training Belarusian “radical” fighters to overthrow power. Minsk, however, denies considering sending its armymuch smaller than Moscow, to fight alongside the Russians in Ukraine.

Belarus assured Tuesday that the military force formed with its Russian ally is only defensive, at a time when Minsk accuses Kiev of preparing an offensive, raising fears of its direct intervention in the conflict in Ukraine. “The objectives of the regional pooling of forces are purely defensive. And all the operations currently being conducted are aimed at an adequate response to the actions being carried out near our borders,” Belarus Defense Minister Victor Khrenine said, quoted in a press release from his ministry. He indicated that this force should make it possible to guarantee security at the borders of Russia and Belarus.

“In the West, unfortunately, we cultivate the idea that the Belarusian army could participate in the special military operation in Ukraine,” Belarusian Security Council secretary Alexander Volfovich denounced on Tuesday.

“By admitting to this kind of misinformation, the leaders of NATO and several European countries are clearly considering the possibility of aggression against our country,” he added.

Belarus has already lent its territory to the Russian army for his offensive against Ukraine, but Minsk has so far not directly participated in the fighting on Ukrainian soil. The entry of Belarusian troops into their neighboring country would signal another escalation of the conflict in Ukraine.

VIDEO – Emmanuel Macron in Prague: “The goal is to build a common strategy” in Europe