Home » start of 3 days of funeral, the king “shares the pain” of the families 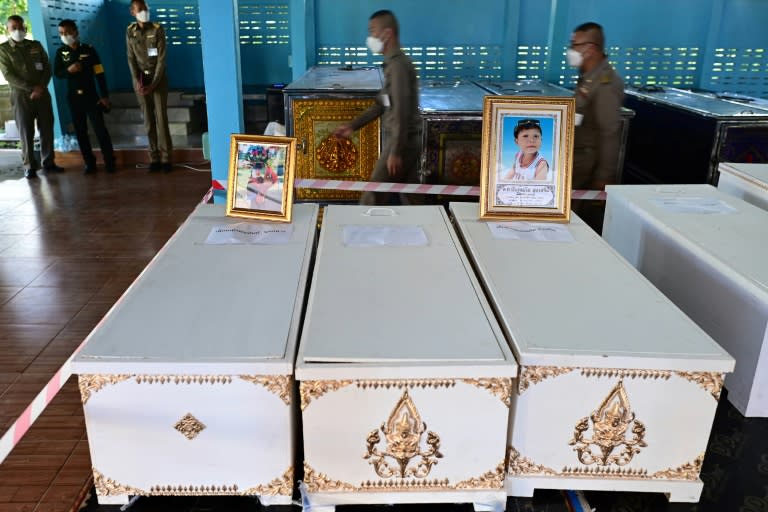 In Thailand, heartbroken families prayed for victims of a massacre in a manger on Saturday after receiving support from their king, who “came to share their pain” on a rare visit to his subjects.

The 70-year-old monarch went to a hospital in Nong Bua Lamphu on Friday evening where the injured in one of the worst attacks in the kingdom are being treated, killing 36, including 24 children.

On Saturday, families and loved ones gathered at a Buddhist temple, beginning three days of funeral rites.

The incense mingles with the scent of the countless bouquets of flowers arranged around the coffins, many of which are topped with photos of the smiling, plump faces of the children shot by Panya Khamrab, an ex-police officer.

Flowers and toys given as gifts to missing youths piled up at the gates of the nursery on Saturday as the tight-knit community in the rural Na Klang district struggled to cope with the atrocity.

“I have a son of my own and he likes to play with toy cars, so I thought the children who died in the attack would like that too – they were about the same age as my son,” Weerapol Sonjai, 38, told AFP after the incident. making an offering.

On Friday evening, the relatives knelt before the king on the hospital floor, as is the Thai custom in the presence of the monarch.

“I came here to give you my support. I am extremely sad about what happened. I share your pain, your sadness,” he said in a video posted online Saturday morning.

It was a very rare direct interaction with his subjects for Rama X, whose figure is sacred in the land.

The royal visit came after a day of mourning at the small, yellow-walled nativity scene, located on the edge of a village in the rural Na Klang district, some 500 km north of Bangkok.

– A rare interaction with his subjects –

Grief-stricken parents laid white roses one by one on the steps of the nursery where their young children’s lives were brutally cut short on Thursday afternoon.

Duenphen Srinamburi, the grandmother of one of the victims, described the horror of the attack.

“The kids were asleep. He didn’t use a gun, just a knife,” she told AFP.

“My grandson’s face is cut open from here to here,” she added, gesturing diagonally across her face. “His face was completely disfigured.”

A shocked mother grabs her missing child’s blanket and holds her half-filled milk bottle in her hand.

Some children were only two years old.

“I still can’t accept what has happened. Attacker, what is your heart made of?” wrote Sexan Srirach, the husband of a pregnant teacher with their child and murdered in the nursery.

The former police officer armed with a legally purchased 9mm pistol and a long knife killed 36 people on Thursday, including 24 children (21 boys and 3 girls), during a murderous journey of about three hours that began at a daycare center in Na Klang district. in the middle of the day.

The 34-year-old man then took to the road and punched passers-by until, according to police, he went to his house, “not far” from the nursery. He killed his wife and their son there, and then committed suicide.

Prime Minister Prayut ordered a quick investigation into the massacre and it turned out that Panya had been fired by the police for drug abuse.

Several people in this rural province told AFP that he was known for his methamphetamine addiction.

VIDEO – Thailand: Reflection after the murder of a daycare center attacked by an ex-police officer