Horrible weather caused a massive and tragic accident on a Pennsylvania highway that involved more than 50 vehicles, including several trucks. The report lists 3 dead and about 20 injured.

On March 28, about 10:30 a.m., some fifty cars and trucks got stuck in a huge pile up on Interstate 81 near the northeast town of Pottsville Pennsylvanianasty United States† Part of the highway was immediately closed to traffic.

Impressive images of the crash were broadcast on social networks, revealing the magnitude of this monstrous and deadly collision.

At least three people have died after a snowstorm led to a multi-vehicle accident on a Pennsylvania highway on Monday.

Driving too fast, cars and trucks couldn’t avoid the first damaged vehicles and collided with each other, causing massive chaos.

However, the National Weather Service had warned of the bad weather expected in this region that day, especially fog and snow showers, sources of very poor visibility. 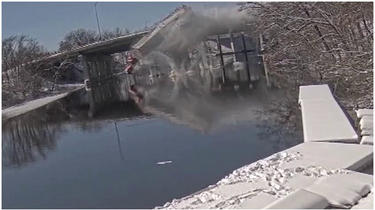 Crash on I-81 Schuylkill County 3-28 from Truckers Dash Cam pic.twitter.com/hos5pgjAoX

Local authorities said 3 people died in the pile-up and about 20 others were treated at area hospitals. Motorists involved in the collision, but not injured, were taken to a center set up by the local Red Cross.

However, the toll was provisional and could add up quickly as the search for the accident site was not yet completed as the vehicles were still on fire.