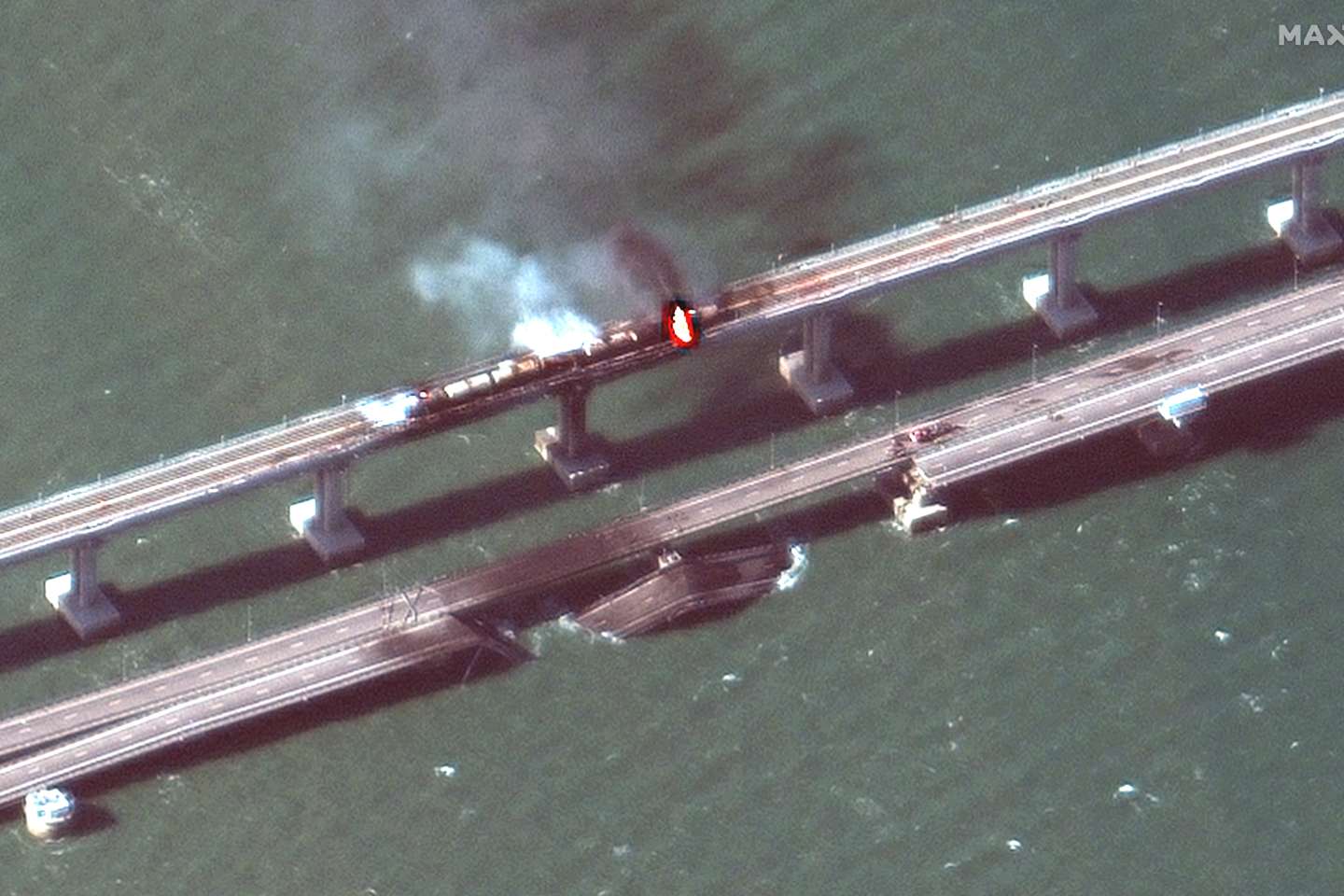 The Crimean Bridge, an important and symbolic infrastructure connecting Russia at the level of the Kerch Strait, east of the peninsula annexed in 2014, to the detriment of Ukraine, was partially destroyed by a huge explosion on Saturday 8 October attributed by Moscow to a truck bomb.

After appearing to half-acknowledge a Ukrainian attack in an ironic tweet on Saturday morning, the adviser to the Ukrainian presidency Mykhaïlo Podoliak later referred to a “Russian job”arguing that the explosion was the result of an internal struggle between the FSB [les services spéciaux] and the Russian army.

In his evening address, Ukrainian President Volodymyr Zelensky contented himself with saying, referring to the annexed peninsula: “Unfortunately it was cloudy in Crimea”not to mention the explosion.

A punch for Moscow

CCTV footage shared on social media showed a powerful explosion as several vehicles crossed the bridge, including a truck that Russian authorities suspect was the source of the blast. Other images show a convoy of tankers in flames on the track section of the bridge, and two spans of one of the two collapsed lanes.

According to investigators, three people were killed in the early morning attack: the driver of the truck and two people, a man and a woman, who were driving near the explosion and whose bodies were retrieved from the water.

Crimea authorities announced in the afternoon that traffic for cars and buses had resumed on the bridge’s only intact carriageway. Trucks will now make the crossing on ferries. According to a railway company, two trains could also leave for Moscow and Saint Petersburg; the Russian news agency TASS indicated in the night from Saturday to Sunday that train traffic for travelers and goods has fully resumed, but with a delay.

Investigators said they had identified the owner of the truck bomb, a resident of the Krasnodar region of southern Russia, and investigations were underway.

The Crimean Bridge, a concrete infrastructure built at great expense by Vladimir Putin to connect the annexed peninsula with Russian territory, makes it possible in particular to transport military equipment to the troops fighting in Ukraine. If Kiev were the cause of the fire and explosion, the fact that such a crucial passageway could be damaged by Ukrainian troops so far from the front would be a blow to Moscow.

“Crimea. The bridge. The beginning. Everything illegal must be destroyed, everything stolen must be returned to Ukraine”, had responded to Mikhaïlo Podoliak on Twitter in the morning, adviser to Ukrainian President Volodymyr Zelensky. However, in a statement issued later by the presidency, he attributed the explosion to an internal struggle between the FSB and the Russian military. “It should be noted that the exploded truck, by all indications, entered the bridge from the Russian side. It is therefore in Russia that we must seek the answers (…) all this clearly points to a Russian track”he declared.

However, the spokeswoman for Russian diplomacy, Maria Zakharova, said the responses in Kiev showed that the “terrorist nature” Ukrainian authorities. The Russian army, in trouble on the Kherson front in southern Ukraine, assured that the supplies of its troops were not threatened. ” Necessities (…) is carried out continuously and completely, along a land corridor and partly by sea”she announced.

Ukraine has hit several bridges in the Kherson region in recent months to disrupt Russian supplies, as well as military bases in Crimea, attacks for which it only accepted responsibility months later. If Moscow for the time being refrains from directly accusing Ukraine, the head of the Russian-installed regional parliament, Vladimir Konstantinov, has denounced a coup d’état. “Ukrainian Vandals”.

Also read: Article reserved for our subscribers Vladimir Putin or the Twilight of Russian Imperialism

The peninsula’s leader, Sergei Aksionov, tried to reassure him by saying that Crimea had fuel for a month and food for two months. According to an official of the Russian occupation in Ukraine’s Kherson region, neighboring Crimea, Kirill Stremoussov, the repairs could take a long time. ” two months “.

Russia has always maintained that the bridge is safe despite fighting in Ukraine, but has in the past threatened retaliation in Kiev if Ukrainian forces attack this or other infrastructure in Crimea. Russian MP Oleg Morozov, quoted by the bureau Ria Novosti, demanded an answer on Saturday “adequate”. “Otherwise these types of terrorist attacks will multiply”he said.

Faced with a galvanized Ukrainian army strong in Western arms stocks, in late September Vladimir Putin ordered the mobilization of hundreds of thousands of reservists and the annexation of four Ukrainian regions, although Moscow only partially controls them. Moscow announced on Saturday that it had appointed a new man to head its government, a sign of dissatisfaction in high places with the conduct of operations. “special military operation” in Ukraine, General Sergei Surovikin, 55 years old.

Finally, the Zaporizhia nuclear power plant, at the center of a months-long stalemate in southern Ukraine, which had to be shut down, once again lost its external power source due to bombing and is dependent on emergency generators, the International Atomic Energy Agency (IAEA) warned. whose mission is on site, on Saturday. The toll from Thursday’s bombings in the city of the same name has risen, the Ukrainian emergency service said late Saturday evening, reporting at least 17 dead.

Our selection of articles about the war in Ukraine