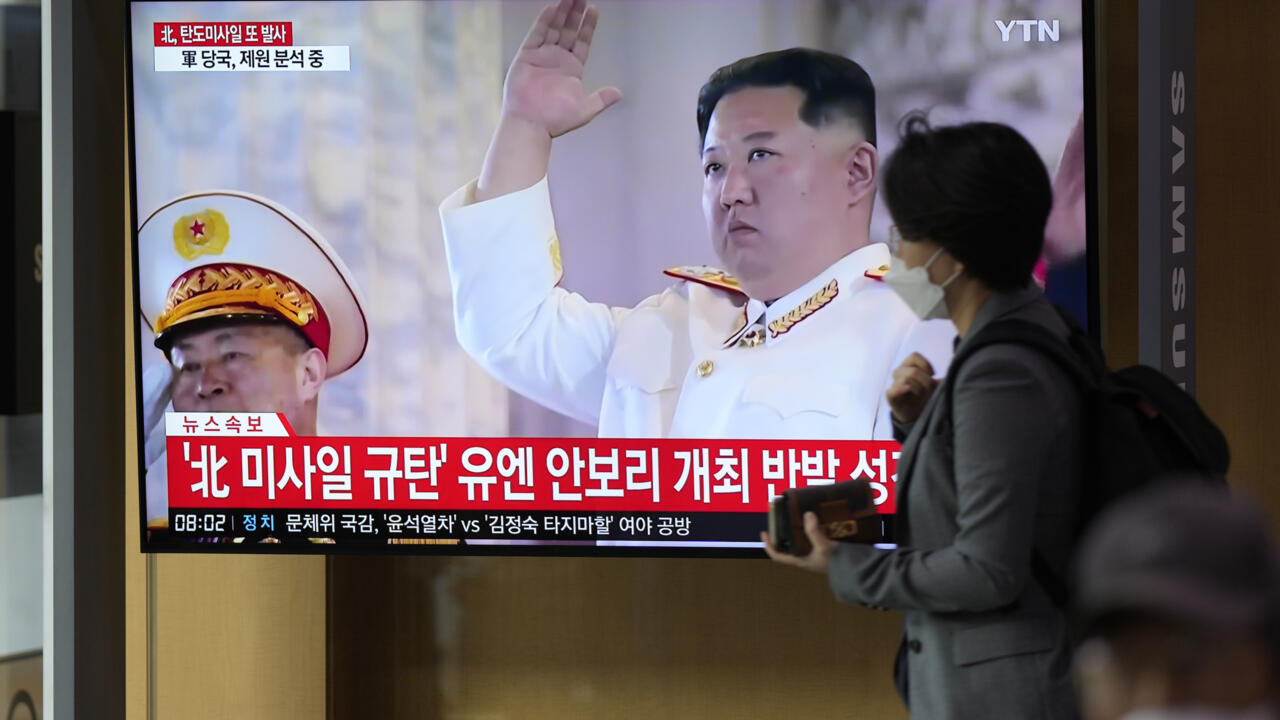 North Korea has been displaying force for the past ten days. Eight ballistic missiles fired in two weeks, including one over Japan, twelve fighter jets parading in the sky… In response, South Korea and the United States are turning the screw and do not hesitate to respond militarily to Pyongyang’s provocations. A customary political confrontation, which allows North Korea to demonstrate its military capabilities to establish itself as a credible force.

The arms race in North Korea is clearly accelerating. Since the beginning of the year” thirty ballistic missile tests launched by Pyongyang Antoine Bondaz, director of the Korea program at the Foundation for Strategic Research and lecturer at Sciences Po, digs a record of tests that continued as North Korea projected two short-range missiles into the sea from Japan again on Thursday, October 6. two days after the shipment of a Hwasong-12 type missile (medium range) that flew over the Japanese island and set off the warning signal in two northern regions. And two other ballistic missiles fired overnight from Saturday to Sunday, October 9, the South Korean military announced, quoted by the Yonhap news agency.

Opposite, Washington, Tokyo and Seoul see it as a clear provocation“ absolutely unacceptable according to Japanese Prime Minister Fumio Kishida. The two camps face each other in a now-recurring military confrontation. But according to Antoine Bondaz, North Korea’s missile tests are not without precedent. For him, this military escalation remains” a well-known situation for now as there have been many tension cycles in the past on the Korean peninsula “.

These cyclical tensions allow Pyongyang to continue developing its defensive arsenal, and “ to send a political message that says, “We have deterrent capabilities and leverage to weigh against other countries” ‘, says Théo Clément, international advisor and PhD student in the field of North Korea.

Military leverage and a defensive arsenal that has expanded enormously since 2011 under the Kim Jong-un era.” The number of rocket tests is only increasing. There have been 170 since he came to power, while under his father, Kim Jong-il, there have been only about 15 trials in 15 years. “says Antoine Bondaz.

However, the range of North Korean armaments is very difficult to quantify, for lack of a precise source. ” Thanks to telemetry, we have a relative idea of ​​the trajectories their missiles can travel, and roughly calculate the payload they can carry. But it’s unclear what exactly the country gets from these tests, if they’re collecting data to know what they can improve on. We also don’t know the exact number of missiles. asks Theo Clément.

What we do know is that North Korea has developed its military arsenal around non-conventional weapons (nuclear, radiological, biological, chemical), with an emphasis largely on nuclear. ” The country is highly advanced in its nuclear and ballistic capabilities. Developing its missiles is a technological achievement “, emphasizes the PhD student. Moreover, its status as a nuclear power, enshrined in its constitution in 2012, is stated by Kim Jong-un as ” irreversible » in Sept.

In return, his conventional armament, his tanks, guns and the weapons used by the infantry are ” very old, even outdated and decades behind » said Theo Clement. To compensate for this slowdown, North Korea has therefore chosen to focus on the most deterrent elements, including catching up with its neighbor South Korea. ” The North has mainly invested in asymmetric capabilities, in the sense that there is a very large gap between South Korea and North Korea in terms of conventional weapons. Seoul spends a lot more on weapons than Pyongyang, and it has much more modern equipment. From his point of view, therefore, the North is trying to restore some form of military balance Antoine Bondaz explains.

But should we be concerned about this period of escalation in the Korean peninsula? For the two specialists, the repeated missile tests actually fit in the continuity of the test campaign army of Pyongyang. ” There have already been several test episodes this year, and if they come on time, it’s mainly for geopolitical reasons, with Visit of Kamala Harris to Seoulthe joint military exercises in Washington, Seoul and Tokyo… But this too should not be seen as something unheard of “says Theo Clement.

Rather than the threat of an imminent attack, it is a show of force to prove its credibility. “Le North Korea continues to develop its arsenal to make its nuclear deterrent and conventional capabilities more credible Antoine Bondaz emphasizes. For him, a military escalation with the Korean dictatorship is always cyclical: first a period of tension in which the country tries to achieve a positive balance of power, before possibly discussing, usually through indirect dialogue through intermediaries of certain states, such as Sweden in 2017 Finally, a phase of negotiations and possible concessions. ” For now, we are far from it. We are in the midst of the balance of power era. »

► To also read: US aircraft carrier in South Korea amid tensions with North Korea

North Korea maintains an almost paranoid position relative to the rest of the planet, Théo Clément said. ” Pyongyang is trying very hard to be very powerful, but in my opinion it is more the result of an attitude of weakness. A way of showing that if we are attacked, we can defend ourselves. The North Koreans live with the idea that the country’s security is hanging by a thread, the propaganda hammering home that the Americans are about to attack. There is a mirror situation where what is projected onto North Korea in the media and political speeches projects itself onto the rest of the world. »

The two experts therefore agree that these missiles serve more for Kim Jong-un to push himself at the table of international discussions, and to be taken seriously. ” The idea is to remind the world that he exists because, after all, little has been said about North Korea since the beginning of Joe Biden’s mandate. We only talk about it when there are rocket tests or big events are organized ‘ says the researcher. And Théo Clément understood that well.

A favorable context for missile tests

Benefit from attention, but also from geopolitical tensions. Due to the international context, an opportunity has opened up for North Korea to conduct its ballistics tests without too much disruption. ” There are three factors that benefited Pyongyang:sums up Antoine Bondaz. Trivialization, because we’re used to these ballistics tests. The distraction, because all eyes are on Ukraine. Then the divisions within the international community grew. Not for nothing, China and Russia vetoed a draft Security Council resolution last May condemning North Korea, while sanctions were still unanimous in 2017.

Pyongyang thus tests the tolerance threshold of the United States and South Korea and takes advantage of these tensions for opportunistic, commercial and financial purposes. According to the US Secret Service, the Russia would receive weapons and military equipment from North Korea, which the country denies. If true, these imports would be strongly condemned by the UN. ” North Korea plays the proximity with Russia not for ideological or strategic reasons, but to make it easier to circumvent sanctions, where these international sanctions prevent nearly 97% of North Korean exports “, says Theo Clement.

The country is therefore violating its commitments and UN Security Council resolutions with impunity in the face of an almost powerless international community. After the ballistic missiles fired this week, Seoul and Washington expect North Korea to launch another nuclear test soon, which will never give up possession of the atomic bomb.