Home » UNDERSTANDS IT ALL – Can Vladimir Putin single-handedly decide to use nuclear weapons? 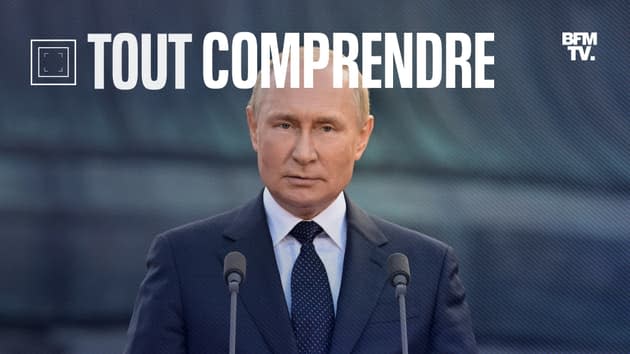 Faced with Ukrainian resistance, Russian President Vladimir Putin has repeatedly pointed to the possibility of using nuclear weapons in the ongoing war. The US President Joe Biden warned of a risk of ‘apocalypse’ on Thursdayfor the first time since the Cold War.

However, it remains difficult at present to know to what extent this nuclear threat can become a reality.

· What nuclear weapons does Russia have?

Russian nuclear energy is important, but assessing it accurately is complicated because little information is filtered out on the subject. According to data from Bulletin of Atomic Scientistsdated February 2022, Russia has 5977 nuclear warheads, but not all of them are deployed and operational.

“There are indeed so-called tactical weapons that are defined as weaker than strategic weapons, but they are still very powerful nuclear weapons,” recalls BFMTV Lova Rinelassociate researcher at the Strategic Research Foundation.

“We are talking about a serious arsenal, which is lethal, we are about equal to that of Hiroshima, so we are really on something dangerous that endangers the population,” the researcher underlines.

· In what cases can Putin use nuclear weapons?

Russian doctrine states that Vladimir Putin may use nuclear weapons if Russia is attacked and if this attack threatens the very existence of the country. If Ukraine is currently under attack, the Russian president has repeatedly reminded: annexed territories in Ukraine were now Russian for him, and that any attack on these grounds would be considered an attack on Russia.

The subtlety of this framework is that it is Vladimir Putin who defines what equates to “endangering the very survival of the country”. The concept is broad and a bit vague, meaning the cases that fit into it are potentially numerous.

Piotr Tolstoy, Vice President of the State Duma, however insured on BFMTV this week to “make sure we don’t use nuclear weapons. We have a doctrine, so the law is very clear about that and we can only use it if there is an existential threat to the entire Russian territory.”

· Who decides to use nuclear weapons?

Under Russian law, it is Vladimir Putin who decides for himself. But Russia also inherited the Soviet system of collective decision-making, which required the consent of the Defense Minister and the Chief of Staff of the Armed Forces. Is this still the case today? The answer is vague, we don’t know exactly whether these two military officials have any real blocking power over the nuclear issue, explains Bruno Tertrais, deputy director of the Foundation for Strategic Research.

However, he underlines that if these two military officials were really a brake on the Russian president, he would only have to replace them for humans who would approve his plans.

Michel Yakovleff, former deputy chief of staff of the Supreme Headquarters of the Allied Powers in Europe (NATO), underlines on BFMTV that the soldiers responsible for carrying out the nuclear launch could, for their part, oppose such a decision, the is “hundreds of people, hundreds of people, some of whom are critical of the system”.

What Putin says is holding back “is” fear of disobedience, that’s what I call the ultimate test of loyalty. He fears that by giving such an extreme order that everyone will be paralyzed – by saying to themselves ‘no, but here we are changing the world and I also have a family and I wish we would avoid the third extinction ‘ – some guys say ‘oh no, I’ll stop’,” explains Michel Yakovleff.

· Will Putin push the button?

Apart from the threats in the words of the Russian president, today there is no sign of preparation, no sign of an imminent attack. “We have no reason to change our own strategic nuclear stance, nor do we have any indication that Russia is preparing to use nuclear weapons in the near term.” White House spokeswoman Karine Jean-Pierre said this on Friday.after Joe Biden’s alarming comments.

“A number of US officials have seen no signs of any preparation for the use of nuclear weapons, despite Putin’s somewhat irresponsible attempts at intimidation lately,” said former CIA chief David Petraeus.

Experts also say that if Russia planned a nuclear attack, it would be seen and known. Nuclear storage sites scattered across the country are constantly monitored by satellites, intelligence, and foreign military surveillance. If there was an imminent threat of an attack, the weapons would have to come out of storage, the Russian ground forces would have to prepare, they would have to be provided with protective equipment and it would not go unnoticed.

· Is he only trying to scare people?

For historian Anne de Tinguy, researcher at Sciences Po-CERI, Vladimir Putin would have no interest in carry out its nuclear threatbut “he is indeed scary, look in France, around us in western countries, the first question we have today is ‘is he going to use nuclear weapons?'”.

“It is clear that we must take threats related to nuclear energy very seriously, that is clear and I believe that everyone takes them seriously,” the historian continues, “but at the same time we must be right, as the Russians actually have no interest in the use of a nuclear weapon, even tactical. Mr. Putin and those around him know very well what reprisals they will face if they use it.”

Vera Ageeva, a political scientist specializing in Russia, is less confident in this situation because “even if it doesn’t make sense for us to carry out nuclear threats and a nuclear attack, it makes sense to him”. The more the Russian president loses ground in Ukraine, the weaker he becomesthe more dangerous it gets.

Vladimir Putin “thinks that if he does it, he shows that he is the one who manages the situation, that he is able to define the rules, so in my opinion he should not be excluded, the pressure on him is also great enough, so it’s a real danger.”