Home » War in Ukraine: the postal mail sends the message with collectors’ stamps about Russian defeats 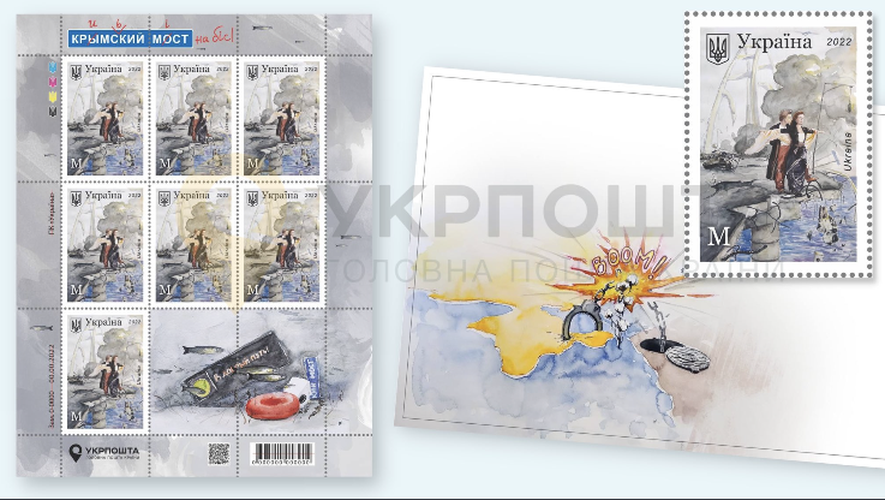 The Ukrainian Post issued several stamps referring to Russian defeats. And they’re not just for philatelists.

Igor Smelyansky is the very patriotic director of the Ukrainian postal service Ukrposhta. Like many Ukrainians, he defends his country tooth and nail and has used his services to make it known. He understood very well the importance of the communication war.

Since the beginning of the war, the postal services have issued several stamps and respond particularly well to current events! Yesterday they launched a special stamp in honor of the explosion of the Krimbrug.

“In view of today’s news, Ukrposhta issues a stamp “Crimea Bridge – Completed” and an envelope with Crimea breaking handcuffs with Russia. Available online and in our stores soon,” the manager said on Twitter.

Pictured is a couple standing in front of a crumbling bridge, like Leonardo di Caprio and Kate Winslet in the movie… Titanic. On the envelope is a map on which the handcuff that connects Crimea and Russia explodes.

A giant stamp representing the explosion of the bridge was also installed in front of Kiev City Hall. People come to take their photo in front and share the photo on social networks.

Another message was sent on September 30. “As you know @ukrposhta responds quickly to the latest news, so our good old new stamp: Russian warship, fuck you, we join NATO or Русский военный корабль идем в НАТО ;)”with a soldier with raised middle finger in front of a boat.

On September 20, it was an envelope announcing the color: “To remind everyone that today we Ukrposhta issued an envelope “Putin welcome to hell”. If it worked as fast as with a Russian warship and arrived at its final destination, we will create an additional problem with the word “READY” ; )”. The envelope in question shows Vladimir Putin being held from behind by the arm of a Ukrainian soldier.