Home » What is the Antonov An-225 Mriya, the gigantic Ukrainian plane destroyed by the Russians? 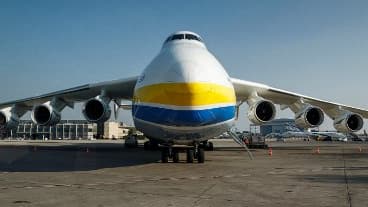 The Antonov An-225 Mriya, the world’s longest and heaviest aircraft, has been destroyed by the Russian army in Ukraine. Back to an exceptional device.

It was one of the last major blows of the communist regime. Out of breath, the USSR tried to keep the dragee in the United States technologically high in the late 1980s. When Moscow sent its cosmonauts into space in its solid but outdated Soyuz launch vehicle, the Americans had envisioned a more practical and much cheaper space shuttle.

Despite the disastrous Challenger accident in 1986, NASA’s “shuttle” left the Soviet enemy languishing, determined to respond. Therefore, two years before its final dislocation, the USSR put its Buran shuttle into service. A big problem remains: how to transport the device from the construction site in Samara, on the banks of the Volga, to the Baikonur launch site in Kazakhstan 1,300 kilometers away?

The plane of all records

So the Russians are going to build the largest and heaviest plane in the world, which is responsible for carrying the space shuttle on its back (without engines). It is the manufacturer Antonov, now Ukrainian, who will take care of it. The technical challenge is great: the An-225 Mriya (which means ‘dream’) has to break all records. It will be 84 meters long (ten meters longer than the A380) with a maximum takeoff weight of 640 tons (65 tons more than the A380).

All in record time: He left the assembly shop on November 30, 1988, less than two years after his approval. The first flight took place on March 22, 1989, piloted by Oleksandr Galunenko, who had become a national hero in Ukraine. A few months later, it was unveiled at the Paris Air Show.

However, the disintegration of the USSR (the abandonment of the Russian space shuttle) will entrust it to the hangar for 10 years. It was not until 2001 that the Ukrainian government released its jewel, multiplied commercial flights and carried weight records. In 2011, he was carrying four T-72 main battle tanks, each weighing nearly 50 tons. In 2010, the An-225 Mriya carried two 42.1 meter long wind turbine blades.

Never before had such a load been made. The device can even carry a subway car!

The total destruction on the night of 24 to 25 February put an end to the aerial adventure. A second Antonov An-225 nevertheless exists, at least in part. Never finished, the carcass is also at Hostomel airport but it is still unclear if it was destroyed like its big brother.