Home » The end of US dollar hegemony 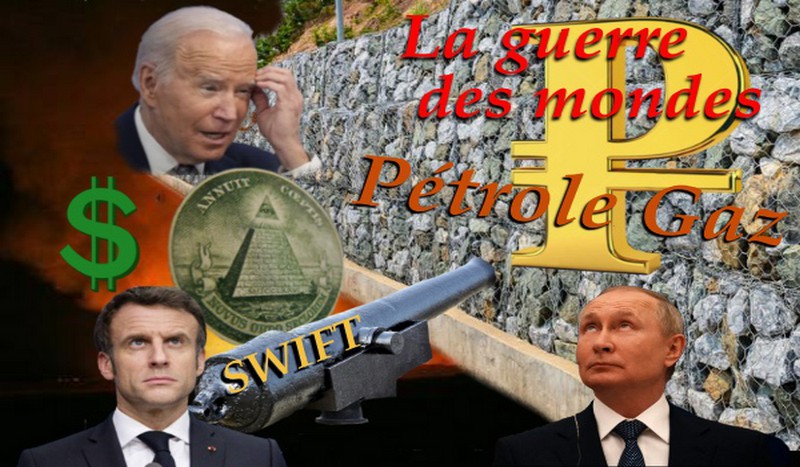 by means of Serge Charbonneau†

We live in a decisive, crucial period. We have never experienced such events.

Caricaturedly we could say that good confronts evil.

This war is crystallizing around economic instruments that are in fact real weapons of control and global exploitation. The US dollar, which has dominated the global economy for decades, is under attack. The clan of the western oligarchy sees its rule in jeopardy.

1944 was a decisive date for the exploitation clan.

In July 1944, in the city of Bretton Woods in New Hampshire, 44 allied countries, the winners of World War II carried out a reorganization of the international monetary system and established the domination of the US dollar over all other currencies.

We also witness the creation of the International Monetary Fund (IMF) and the World Bank. These organizations become real economic battalions of control and exploitation of the countries” in development and serve to maintain this dominance of the US dollar.

A few years later, in 1947, the General Agreement on Tariffs and Trade, GATT, was established. It is the ancestor of the WTO (World Trade Organization). A regulatory body that serves to regulate international trade in goods while promoting the hegemony of the US dollar.

Until 1971, major currencies were convertible into gold at a fixed price, with the central bank issuing the currency. The Central Bank is then required to hold gold reserves equal to the value of the currency issued, thus guaranteeing a physical value to the paper. This monetary system has been stable and the dollar’s dominance is, say, acceptable.

But on August 15, 1971, in compensation for the huge debt incurred by the United States after the Vietnam War, Richard Nixon announced the suspension of the dollar’s convertibility into gold, declaring that the piece of paper ” as good as gold (as valid as gold). A big change! American economic predators can now have their dollars printed at will without having to hold the gold equivalent of the value issued. The game of Monopoly comes completely under their control. Nothing limits the imagination of economic predators.

For millennia, money was based on real goods, including precious metals such as gold and silver. Nixon committed one of the greatest rhetoric in deciding that US dollars were worth” gold† He opened the door to domination” without restraint of the US banknote.

For years, several countries have tried to escape this unfair domination of the US currency. Several presidents have been assassinated for trying to trade their oil with gold or a currency other than the US dollar. Saddam Hussein, Muammar Gaddafi, Hugo Chavez (deceased from cancer) are missing. With the dollar’s unlimited “production” these oil-producing countries felt like they were being paid in monkey money.

“The master of Iraq has decided to attack the dollar king. Yesterday, from Baghdad, Saddam Hussein reiterated his determination to stop using the dollar in his country’s international transactions. “The dollar will be replaced by other foreign currencies, including the euro,” said Finance Minister Hekmat Ibrahim al-Azzaoui. In other words, Europe, the main buyer of Iraqi oil, would no longer be obliged to pay for its purchases of black gold in US currency. †

Grab the ” U.S. dollar could cost you your life. Today it is Vladimir Poutine who dares the adventure. After threats from NATO, Putin decided to take action. Along with a military operation in Ukraine, Putin decided to sell his oil and gas in rubles. No longer using the US dollar. If Europe or anyone else wants Russian gas, it will have to be paid in rubles since April 1, 2022. This decision is drastic.

In addition to reducing the importance of the US dollar, this Russian decision also puts an end to the use of the SWIFT system.

The SWIFT system that stands for Global Interbank Financial Telecommunications Association is a communication system to facilitate interbank money transfers (a kind ofInterac) and international payments. In short, if you can easily pay for your hotel, your restaurants and your purchases abroad with your credit and even debit cards, it’s thanks to SWIFT.

In February 2022, the Western world of exploitation, the Deep State, decided in retaliation for the Russian military operation in Ukraine to “punish” Russia by denying it access to the SWIFT system. The punishment did not have much punitive effect. Indeed, Russia, China, India and some other countries have decided to bypass the SWIFT system.

These countries represent more than 3 billion people, compared to about 1 billion on the western side (Europe and North America combined).

The Russians are not two spades. Since 2014, they have been preparing for such an eventuality. So they set up a credit card system, Mir, and the Akras credit rating agency. Above all, since 2017, the country has had its own interbank transaction system, SPFS, developed by the Central Bank of Russia, to which 400 Russian banks are affiliated. The SPFS network was integrated into its Chinese equivalent, CBIBPS, and at the end of 2020 included 23 foreign banks, mainly from Armenia, Germany, Kazakhstan and Switzerland. Russia’s exclusion from Swift is ultimately more damaging to the Western economy than it is to the Russian economy. This exclusion ultimately benefits the development of the Russian and Chinese competitive system.

The Deep State predators thought they were hurting the ruble by cutting Russia off from the SWIFT system, but instead we see its continuation and even increasing strength. Putin’s decision to accept only the ruble as payment for Russian oil and gas has made the ruble inevitable. Countries that want Russian energy have to go through the ruble. No ruble, no gas! It is a terribly effective drastic stimulant.

The unipolar world of exploitation, that is, the deep state of the Western oligarchy, is being undermined. The multipolar world, which respects the sovereignty of countries and the diversity of their cultures, organizes, supports and installs defense mechanisms that are not only economic, but also military and even cultural.

We must prepare for major changes. The economic deal is turned upside down. Debt, interest rates, hourly rate, financial control, interest of banks, value of energy, all these parameters threaten to change radically.

We hope that cooperation, mutual aid, free international aid can replace the exploitation and greed of this oligarchic cabal that owns almost all of the world’s wealth.

The globalists seem to be on their way to being defeated.