Home » The Bavaria in danger! – Debriefing and COMMENTS from the players (Villarreal 1-0 Bayern) – Football Tactically neutralized, Bayern Munich lost in the quarter-finals of the Champions League to Villarreal (1-0). A deserved win for Unai Emery’s team. 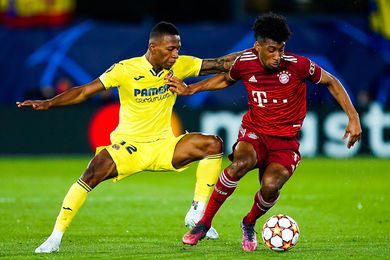 Kingsley Coman was one of the few dangerous Bavarians.

Big favorite of this quarter-final of the Champions League, Bayern Munich are in great danger for the return leg.

Because in the first leg, the Bundesliga bogeyman could only bow on the Villarreal site (1-0) at the end of a spectacular encounter!

Bayern without a solution

From the start, the Bavarians put a lot of pressure on them and settled on the other half of the field. Danger began to approach on the Spanish cage, thanks mainly to Coman’s overflows on the right.

But little by little, Villarreal put their block in place and quickly neutralized the German champion. Better yet, Unai Emery’s men, very honest in their ball exits, managed to put in a few attacks and found the error thanks to Danjuma (1-0, 8th)! We could expect a big German response. But the sturdiness of the yellow submarine prevented any possibility. Lewandowski, Müller or even Gnabry were almost invisible…

On the other side, Frenchman Coquelin successfully thought of giving Villarreal a double advantage in the 41st minute before his goal was disallowed for offside. A relief for Bayern, which did not hit the bull’s eye before half-time! Suffice it to say that the residents of Munich returned after the break with much better intentions. Finally we witnessed a reaction from the visitors whose chances piled up, such as Gnabry’s attack just next door, or Davies’ recovery from goalkeeper Rulli.

However, it must be recognized that the best odds remained in Villarreal’s favour. The proof is the post that fended off Moreno’s attempt! And the attacker didn’t go far from an exceptional lob after a dumpling from Neuer! The Spaniards could almost blame themselves after so many opportunities to widen the gap, especially by counterattacks with numerical superiority. Fortunately for them, after pushing late in the game, Bayern are not coming back in this first leg. But the second round promises to be just as exciting!

As they say it takes two teams to make a great game and this Wednesday night Villarreal was more than up to Bayern! Despite Unai Emery’s blockade, his training played an ambitious and at times spectacular game. It’s no coincidence that the ball went from one goal to the next at an insane pace in the second period!

– After a one-two with Moreno, Lo Celso enters the area on the right and puts the outside of the foot in front of Parejo behind it. The Spanish midfielder takes a volley but his ball is cut off by Danjuma who puts Neuer on the wrong foot (1-0, 8th).

Maxifoot awarded a commented note (out of 10) to each player.

Unstoppable, the Villarreal midfielder gave himself a demonstration in the first period! The Argentinian tried and succeeded in all his technical gestures, starting with his cross from the outside of the foot in front of Danjuma’s goal. In addition to his technical finesse and passing quality, the former Parisian was very disciplined in his defensive withdrawal. Maybe he regrets his little lack of clarity on a counter that didn’t work out.

Gerónimo Rulli (6): Not asked at all in the first period, the former Montpellier goalkeeper did the job in the second act. He remains alert to Davies’ framed recovery and provides a reassuring exit for his defenders.

Juan Marcos Foyth (8): Impressive in the duels, the right side just disgusted Gnabry and Davies! He also shone on the relaunch thanks to his complicity in Lo Celso. Replaced at the 81st by Serge Aurier (not rated)†

Raúl Albiol (6): Well placed, the Villarreal captain made some important interventions. But he was sometimes on the limit, such as when his tackle on Gnabry almost caused a penalty. Or when Musiala hastily dropped him off.

Pau Torres (7): Both solid and elegant, the Spanish international muzzled Lewandowski. He is shocked by Musiala’s breakthrough, which he eventually manages to stop twice.

P. Estupiñán (6.5): in contrast to a tough Coman, the left side suffered at the start of the game. His teammates sensed the danger and of course gave him the right advice as he got on better with the Frenchman after that. Even a few interesting climbs possible.

Etienne Capoue (8): what a volume of play! Ubiquitous in recovery, the ex-Toulousain projected himself as soon as the opportunity arose. This huge burst of energy did not affect his technical accuracy, nor his ability to get out of the German press.

Daniel Parejo (7.5): The Spanish midfielder, best known for his technique and passing quality, also impressed physically! It was hard to imagine that he would compete in intensity against the Bavarians, but he held out. In fact, he can be considered a decisive passer for Danjuma. Dan authored a small bridge over Coman.

Francis Coquelin (6): A note slightly lower compared to his midfield team-mates, the former Gunner sometimes looked like a third centre-back. Undoubtedly an instruction from Unai Emery that succeeded for him, as the Frenchman contributed to the discretion of the duo Müller-Lewandowski. Replaced on the 59th by Alfonzo Pedraza (not rated)who missed a great opportunity late in the game.

Gerard Moreno (7): given the quality of his game, the Villarreal striker deserved a goal. He spared no expense in his incessant cry for the ball or in the depths, the weak point of the German hinge. However, it is on a long shot that he finds the post, for his long lob that ends just wide.

Danjuma (6.5): The Dutch striker may not be completely satisfied with his match. Admittedly, he scored the only goal in a game where his deep calls wreaked havoc. But he clearly misses the ball on a huge break chance in the second half! Replaced at the 81st by Samuel Chukweze (not rated)†

Manuel Neuer (3): Like his team, the Bayern goalkeeper was not in his game. He was surprised on a center shot from Coquelin, without consequences as the goal was disallowed for offside. Then his loss of possession in midfield gave Moreno a chance to lob him, and it didn’t get very far.

Benjamin Pavard (7): When his compatriots showed feverishness in defense, the French central defender was the pinnacle. He was able to cover his teammates like his return to Moreno. And his position didn’t stop him from pushing the surplus forward, especially a tense blow above it. Replaced by on the 71st Niklas Sule (not rated)†

Dayot Upamecano (3.5): Known for his athleticism, the tricolor international takes forever to turn on the balls behind his back. Obviously, Villarreal had discovered this defect since Danjuma and Moreno partied extensively.

Lucas Hernández (4): Like Upamecano, the former Atlético Madrid player struggled to control the mobility of the Spanish forwards. He was late several times, as witnessed by the action of the goal with Lo Celso standing in front of him in the penalty area.

Alphonso Davies (4): after about three months of absence we should not expect more. Before his return, the mighty left was hesitant in the first period, then a little more enterprising. Despite his shot on target, it remains insufficient, knowing that Lo Celso caused him a lot of trouble.

Joshua Kimmich (4.5): After a festival of failed broadcasts in the first period, the midfielder recovered after returning from the dressing room. He brought Bayern back into rhythm, but failed to find the decisive pass.

Jamal Musiala (5): Intensely eaten before half time, the young Bavarian showed more in the second period. He tried interesting sequences near the Spanish surface, but his attempts always found an opposite foot, or the cross-border intervention of Pau Torres.

Kingsley Coman (7): Without him Bayern would have been harmless. Despite the resistance of his opponent Estupiñan, the tricolor winger was the only enterprising and especially dangerous Bavarian in the first period. He took a long-range chance in the second act and could have found the top corner had it not been for Torres.

Thomas Muller (2): invisible, the Bavarian striker does not weigh at all. He could have gotten away with a lucky goal, but he didn’t react quickly enough to avert Gnabry’s shot. Replaced at the 62nd by Leon Goretzka (unrated)who did not mislead the referee by trying to get a penalty.

Serge Gnabry (3): very discreet in the first period, the German winger couldn’t make the difference. His attack just off the return from the dressing room was not enough to convince Julian Nagelsmann, no doubt annoyed by his lack of defensive withdrawal. Replaced at the 62nd by Leroy Sane (not rated)which did not bring the percussion expected by Julian Nagelsmann.

Robert Lewandowski (2): no chance, no good ball to negotiate for the Polish striker. Hence his annoyance when Coman took too long to serve him.

+ Find the results and the Champions League ranking on Maxifoot

And for you, who were the best and worst players of the match? Comment below in the “comments” box!