Home » Strikes in the East, new sanctions… What is the situation on the 42nd day of war in Ukraine? 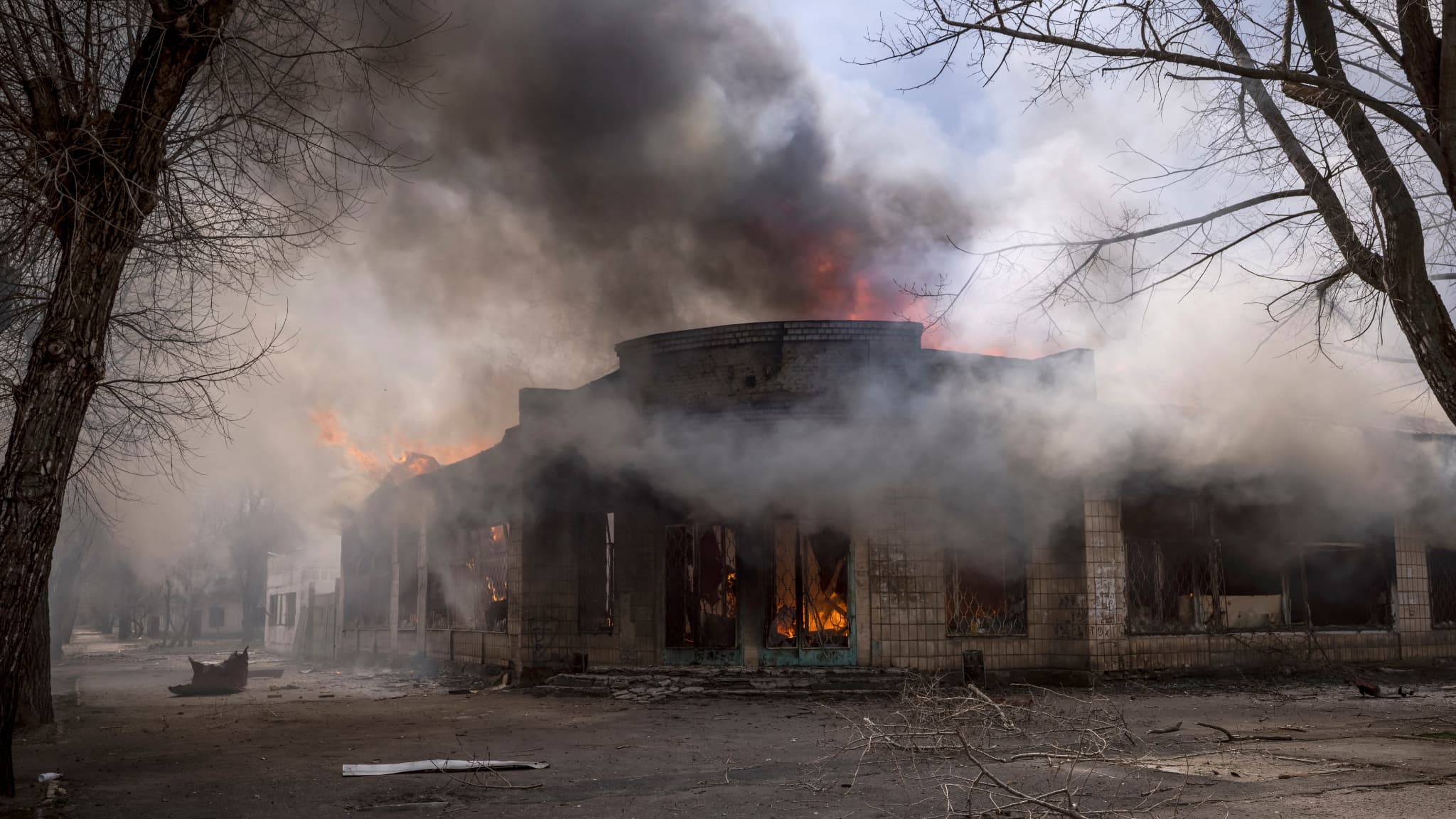 The conflict is now concentrated in the south and especially in the east of the country, where Russian troops are bombing several cities.

After more than a month of conflict, as Russian forces have left towns in northern and western Ukraine, the fighting is far from over. The Russian army is currently concentrating its forces in the south of the country and especially in the east, where deadly attacks are taking place.

Russian President Vladimir Putin has not given up on the conflict in Ukraine and the war is likely to last “months, even years,” NATO Secretary General Jens Stoltenberg warned on Wednesday.

In Vougledar, a town of 15,000 people 50 kilometers southwest of Donetsk in the Donbass region, two civilians were killed and five injured in the bombing of a humanitarian aid distribution center, the region’s governor said on Wednesday.

The attack “came during the distribution of humanitarian aid,” he said, posting photos to Telegram of inert bodies lying outside a building with shattered windows.

The Russian army has been focusing its efforts on the east of the country, which is now a priority target for the Kremlin for several days. Shells and rockets fell at regular intervals on Wednesday at Severodonetsk, the Ukrainian army’s easternmost city, near the frontline with pro-Russian separatist areas.

The inhabitants of the east of the country shouted to evacuate

Faced with these attacks, Kiev on Wednesday called on residents of eastern Ukraine to evacuate the region. Ukrainian Deputy Prime Minister Iryna Vereshchuk on Wednesday asked the civilian population of these regions, including the large city of Kharkiv, “to evacuate now (…) now that the time is right, under penalty of “risking death”.

The governor of Luhansk, in the Donbass, on Wednesday morning urged residents of his region to evacuate “as long as it is safe” as the Russians retreated south and east. “Five humanitarian corridors” will be set up this Wednesday, he announced on Telegram†

“As long as there are buses and trains, take the opportunity,” he wrote, adding that “Russia has started destroying the rail link in the Donetsk region.” “Protect yourself and your family,” he concludes.

BFMTV guest, Olga Stefanishyna, deputy prime minister in charge of European integration, reported “a regrouping of Russian troops in the east and south” of Ukraine. “Three regions have been completely liberated, but there is now heavy fighting in the south, in Kherson and Mykolaiv,” she said.

There are “a number of cities in a situation of very deep humanitarian crisis, even beyond it, such as the city of Mariupol,” she said, adding that “dozens of cities” are in this situation. Ukraine.

“The city [de Mykolaïv] was bombed last night, it was the psychiatric clinic that was bombed, luckily we were able to evacuate the patients earlier,” Vitaly Kim, governor of the Mykolaiv region, testified on BFMTV Wednesday morning. According to him, 2,000 buildings were destroyed in the area.

The United States on Wednesday announced a new round of economic and financial sanctions against Russia, which it described in a press release as “devastating” and targeting notably the major banks, but also two of Vladimir Putin’s subsidiaries: their assets in the United States will be frozen and their ties to the American financial system severed. These daughters of Vladimir Putin are known in the Russian media as Maria Vorontsova and Katerina Tikhonova.

“We believe that many of Putin’s assets are hidden through members of his family, so we are targeting them,” a senior US official said during a conference call.

These new series of sanctions follow the hundreds of deaths discovered after the departure of Russian troops from Boutcha. Russia is accused of war crimes in this city.

However, President Vladimir Putin on Wednesday described the discovery of the corpses of civilians in this city as a “crass and cynical provocation” on the part of Ukrainian authorities. This is the Russian president’s first reaction to this affair that has sparked international outrage. Several Russian officials had denied any Russian involvement in the atrocities in recent days.