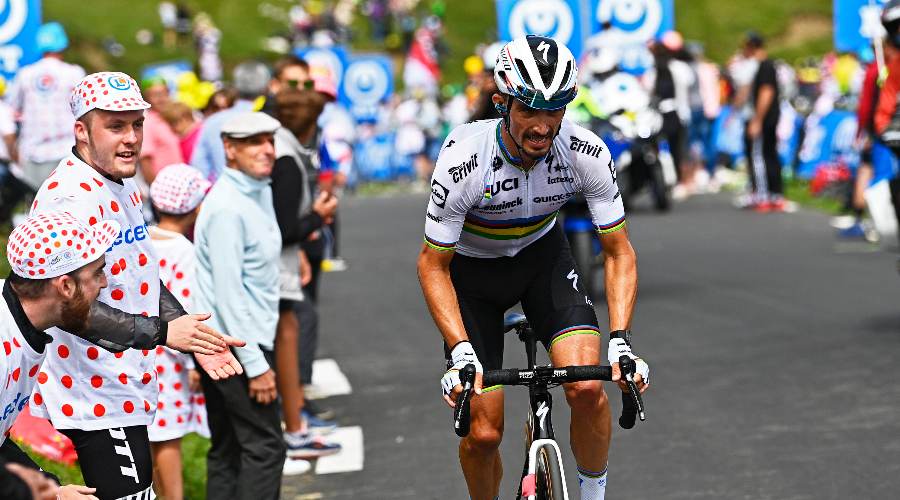 Little in sight since the start of the season, Julian Alaphilippe does not intend to shine in Liege-Bastogne-Liege alone.

Julian Alaphilippe is back. Absent from the Tirenno-Adriatico, where he was unable to influence the course after his big fall on the Strade Bianche, the two-time world champion took the start of the Tour of the Basque Country on Monday. And it started badly when he fell victim to a mechanical problem and was forced to switch bikes. He finished the 7.5 km time trial 44 seconds behind Primoz Roglic.

But for the French, the essence lies elsewhere. The Tour of the Basque Country should indeed serve as a final test canter for the Ardennes Classics, his main target for this start of the season with the Liège-Bastogne-Liège highlight, which he hopes to finally have on his palmares. Then it’s time to move on to the rest, this time with the Tour de France taking center stage.

† Liège-Bastogne-Liège marks the first part of the season. Then I’m going to cut a little, then it’s time to get to the heights, do some exploration of the stages of the Tour de France. I will definitely do the Dauphiné this year, the French Championship and then of course the Tour. In addition, it will be a special Tour, which departs from Denmark. It will be an interesting first week, where a lot can already happen. I’m not necessarily thinking about it now, but after Liège it is true that it will be the objective of the second part of the season.” that’s how he entrusted the microphone of RMC Sport.

The resident of Saint-Amand-Montrond should aim for nothing more than stage victories and the yellow jersey. Despite his fantastic epic in 2019, the Frenchman does not seem to be able to compete for the general classification. At least that is the opinion of the boss of the QuickStep-Alpha-Vynil, Patrick Lefévère. † Objectively, I don’t think he can win the Tour “, he recently confided to his leader, convinced that the Giro d’Italia would suit him better: ” We also want to see Julian in the Giro, he should not only be satisfied with the Tour de France. With the rainbow jersey and as a Frenchman he should of course do the Tour, but next year we are thinking about putting him on the list for the Tour of Italy. I think it’s a race that suits him, it’s nervous and aggressive.

Also read:Alaphilippe, it looks bad for the TourTour de France: Alaphilippe, the revolution?Alaphilippe caught by one of his own?