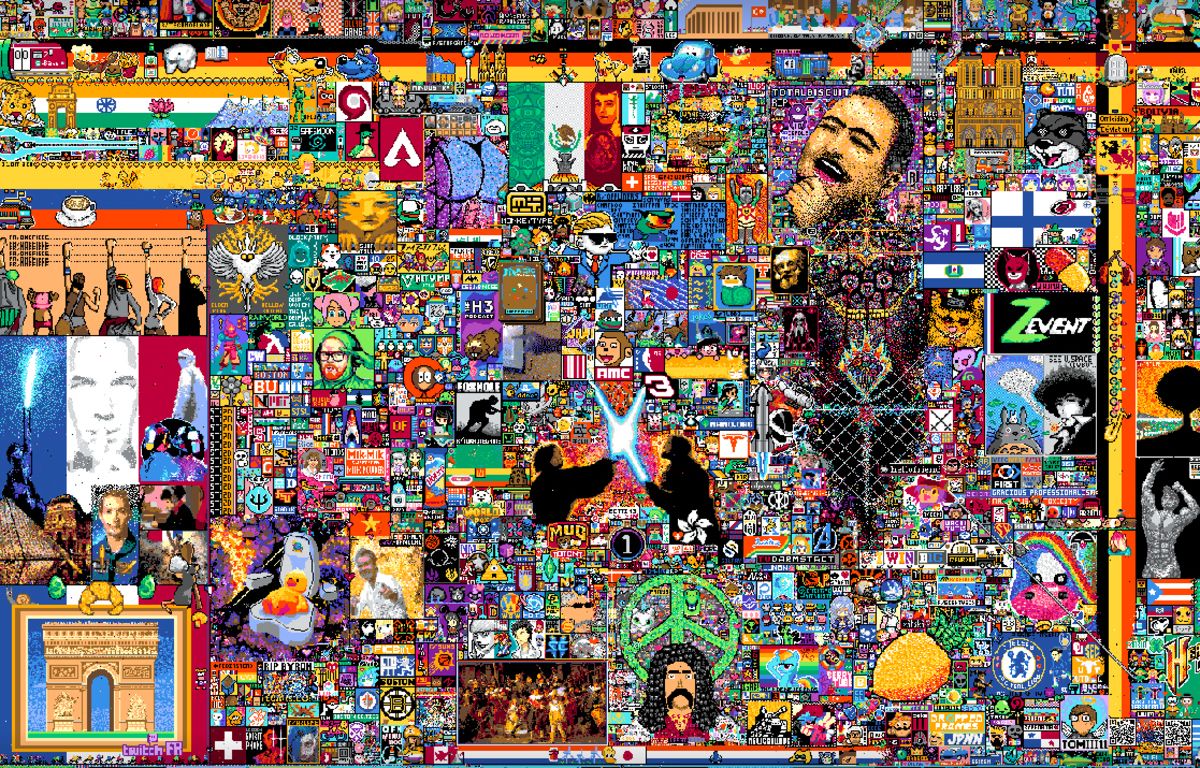 Forget the war in Ukraine or the presidential election. For French internet users, the fight of the moment is called “Pixel War” and has been taking place on Reddit since April 1. The American Social Network five years after an initial trial in 2017, a “social experiment” called r/Place was launched again.

Internet users are invited to cover a blank page with: their digital graffiti to arrive at a great collective work. Smileys, manga or video game characters, memes, national flags, peace symbol or Linux penguin… It’s a happy catch where winks to world pop culture are mixed in.

An artistic and collaborative project with retro charm, which nevertheless culminated in a real battle over the weekend, because the space on this square ran out very quickly despite the doubling to 2000×2000 pixels. And it is not enough for a digital artist to improvise and draw at his leisure, because every Internet user has the right to color only one pixel every five minutes with one of the 32 authorized colors.

It is therefore necessary to coordinate and collaborate with several people if you want to create a work, but also to defend it to avoid being covered up immediately. On Sunday 3 April, the French made a remarkable breakthrough by imposing a huge tricolor flag in the bottom left of the screen. An initiative of the streamer Kameto, self-proclaimed general of the operation and supported by everything France does with web personalities, such as Squeezie, HugoDécrypte, Locklear or Inoxtag.

Streamers on the front line

Despite a counter-attack led by Americans and Spaniards mostly on this platform and accusations of cheating, the French held out and as many as 200,000 people followed Kameto’s operation on his Twitch account on Sunday evening, coordinating on Discord and Twitter.

An agreement has been reached with Turkey and negotiations are underway with the German authorities.

WARNING: A Spanish offensive is scheduled for 11pm, be ready to defend the front line.

Fortunately, it’s not all conflict and vandalism on Reddit and alliances have even been formed, for example with the Irish, whose pint of Guinness mirrors a bottle of French wine. Or even with the supporters of a Windows XP bar that now sits just below the national flag and covers the entire lower bound of the collective work. Tiny hearts and messages announcing that “it wasn’t us” dot the margins of the drawings, trying to pacify the boundaries of this vast digital playground.

After a failed attempt to replace the French colors with a pair of buttocks overnight from Sunday to Monday, the tricolor flag continues to take first place this Monday in terms of occupied pixels and has even decorated itself with many national symbols, from the Arc de Triomphe to the Crescent Moon, passing Thomas Pesquet or Ratatouille. A schoolboy patriotism somewhat tarnished by an attempt to recover from the far right, most notably a tweet from Eric Zemmour on Sunday night celebrating the spirit of retaking and defending the flag. But if we are to believe the drawings of internet users, their favorite French seem to be Zinedine Zidane and Daft Punk instead of Renaud Camus and Charles Maurras, no offense to Eric Zemmour†

As for the flag, it is on track to remain until the end of the experiment, which should take place at an unspecified time on April 4 or 5, to avoid last minute raids. Because anyway, when it comes to art, the French are the first to voice their opinion!