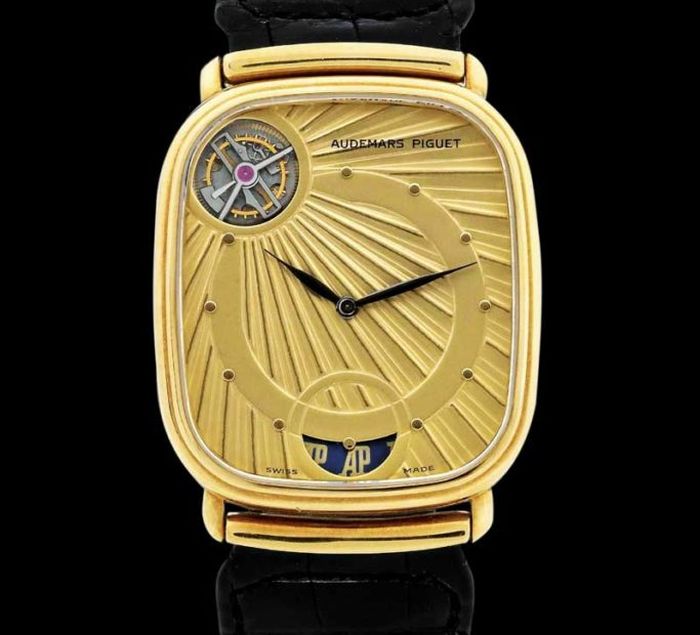 Its titanium tourbillon cage remains to this day one of the smallest in the world at 7.2mm in diameter, as well as one of the lightest at just 0.123g.

This model is known to watch enthusiasts as the Tourbillon Automatic Râ, because Jacqueline Dimier’s design gave the small dial (one of the smallest ever produced) the appearance of the sun whose rays spread across the dial.

This complicated wristwatch will be produced in 401 units for a few years until 1992. It opened a new avenue for Haute Horlogerie, which subsequently revived prestigious mechanisms, including those of tourbillon watches.

Thirty years after the model of Jacqueline Dimier, the manufacturer of AP, known for its innovative capacity, is launching a series of research and development models. In 2015, Audemars Piguet unveiled its first prototype RD#1 Royal Oak Concept Répétition Minutes Supersonnerie.

The result of eight years of research in collaboration with EPFL (Ecole Polytechnique Fédérale de Lausanne) and with a panel of experts composed of watchmakers, engineers, musicians and sound specialists, this watch incorporates Supersonnerie technology.

The subject of three patents, this system, which combines a striking mechanism and an innovative box architecture, marks significant advances in acoustic performance, diffusion volume and sound beauty.

The RD#1 was presented at the SIHH the same year and will allow the manufacturer to launch a year later the salable version of the Royal Oak Concept Répétition Minutes Supersonnerie, winner of the Grand Prix d’Horlogerie de Genève in 2016 in the “Mechanical Exception” category. †

In 2019, AP launched the Royal Oak Calendar Perpetual Ultra-Thin Automatic 41mm, the innovative prototype of which was presented a year earlier at SIHH under the name RD#2.

This calendar watch, whose case is 6.3 mm thick, houses a movement of only 2.89 mm thick, making it the thinnest automatic calendar wristwatch in the world at the time.

To achieve this feat, the calendar functions generally mounted on three levels have been brought together on the same plane. The Manufacture experts have also developed two patented innovations related to the integration of the month-end cam in the date wheel and the coupling of the month cam to the month wheel.