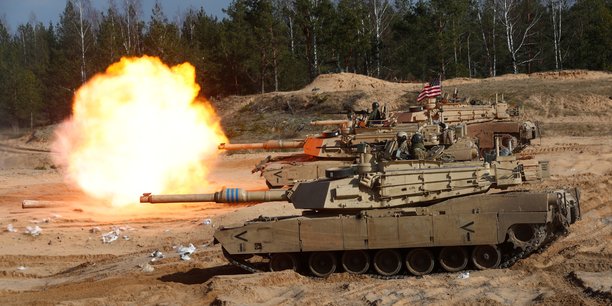 Military order books continue to fill for the United States. After the sale of eight fighter planes F-16 to Bulgaria (1.67 billion dollars), then Germany, which in mid-March decided to buy F-35 fighter jets from Lockheed, or even the supplies sent to Ukraine that Washington plans to salvage at a cost of 3, 5 billion, US manufacturers continue their commercial offensives.

This time it was Poland that decided to expand its capabilities with the purchase of 250 American Abrams main battle tanks, in their modernized version. Total amount of the order: 4.74 billion dollars (4.32 billion euros), in line with last year’s announcements.

During a visit to the Polish capital last week, President Biden reaffirmed: “sacred duty” of the United States, in the event of an attack on a NATO member by another country. “You can count on it” before I quoted an old Polish maxim “for our freedom and yours”†

After the wishes comes the time for commercial reality. †The deal includes the purchase of 250 Abrams tanks, salvage tanks, attack bridges (…), training and logistics systems and a serious amount of ammunition.”Polish Defense Minister Mariusz Blaszczak said at a televised ceremony.

According to the minister, the tanks, the first 28 of which will be delivered to Poland this year, will be deployed east of the Vistula to “to deter the potential aggressor”. Deliveries of all this heavy equipment should be completed by 2026.

‘Everyone knows what’s happening behind our eastern border’in Ukraine for more than a month faced with the Russian invasion, he underlined.

In addition, Poland will try to change the European government deficit rule limited to 3% of GDP by excluding from its calculation defense spending in the context of Russian aggression declared by its prime minister at the end of March.

A thriving year for US arms companies

In detail, according to the Polish media, there are 250 Abrams tanks in the M1A2 SEPv3 version manufactured by the American group General Dynamics, 26 Hercules M882 salvage tanks and 17 M1110 attack bridges.

This supplier is not the only manufacturer to benefit from the war context in Europe. “If 1,000 Stingers (surface-to-air missile launchers) and 1,000 Javelins are sent to Eastern Europe every month over the next year, that could be $1–2 billion in sales.for Raytheon and Lockheed, according to expert Colin Scarola, of the firm CFRA. A significant amount, but compared to their respective sales of 64 and 67 billion last year.

Raytheon CEO Greg Hayes acknowledged that the rise in tensions in Asia, the Middle East or Eastern Europe would undoubtedly boost international sales,”not immediately“corn”later in 2022 and beyond†

His counterpart at Lockheed-Martin, James Taiclet, referred to the “renewed competition between great powers“probably pushing up the US defense budget.

In the United States, Joe Biden has proposed a 4% increase in the defense budget, a figure that should be put into perspective in relation to inflation. But at least the budget is not shrinking.

ZOOM: An Exuberant Month for US Military Trade