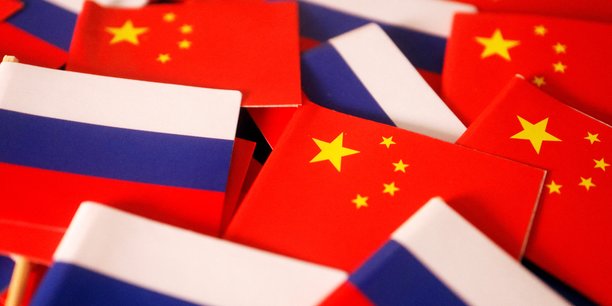 Moscow and Beijing face the United States together. Indeed, this Wednesday, Russia and China reaffirmed their “boundless” friendship, three weeks after it was described as “solid as a rock” by the head of Chinese diplomacy, Wang Yi. Much to the chagrin of Western powers, especially the United States, which have persistently suspected Beijing of wanting to support Russia to mitigate the effects of sanctions, while the Chinese authorities have not condemned Russia’s war in Ukraine. This Wednesday, in Tunxi, Anhui province, eastern China, after an exchange with Sergei Lavrov, the head of Russian diplomacy, the same Wang Yi stated that China and Russia were “more determined to develop bilateral relations and increase confidence.” had to promote their cooperation in various fields.” Already on March 7, the prospects for future cooperation were already rated “huge” by Wang Y. Political and economic relations with Beijing have strengthened significantly since the Russian invasion of Crimea in 2014 and previous sanctions against Putin’s regime.

Oil: “Russia should not be under any illusions about the possibility of replacing its exports to Europe with China and India”

seeThe two men condemned the “illegal and counterproductive” sanctions imposed on Moscow by “the United States and its satellites” since Russia’s invasion of Ukraine on Feb. 24, according to a statement from the Russian Foreign Ministry.

Sergei Lavrov even sees in these sanctions the arrival of the new world order.

“We are experiencing a very serious phase in the history of international relations,” he said in a video of the interview released by Moscow.

“I am convinced that at the end of this phase the international situation will be much clearer and that we (…) will move towards a multipolar, just, democratic world order,” he told Wang Yi.

“China looks forward to working with Russia to take China-Russia relations into a new era guided by the consensus reached by the heads of state,” Wang Yi said.

“Our resistance to hegemony is limitless,” assured Chinese diplomacy spokesman Wang Wenbin, when asked about the Russian minister’s visit.

The two ministers agreed on Wednesday that Russia and China will continue to strengthen their strategic partnership and speak “with one voice” in global affairs. A few weeks before the war in Ukraine, Vladimir Putin himself was warmly welcomed by his Chinese counterpart Xi Jinping in Beijing. The two countries had already celebrated a “boundless” friendship and denounced NATO’s “enlargement”.

The Chinese speeches stand in stark contrast to statements made by Chinese President Xi Jinping to Joe Biden during an exchange on March 18. The Chinese president had considered that military conflicts were not “in no one’s interest”. “The Ukrainian crisis is not something we wanted to see” happen, the Chinese head of state said.

“As permanent members of the UN Security Council and as the world’s two largest economies, it is our responsibility not only to put China-US relations on the right track, but also to take our international responsibilities and work towards peace and tranquility in the world”, he assured Xi Jinping to Joe Biden.

According to a short report broadcast by the public broadcaster CCTV, the Chinese president also estimated that: “State relations cannot go as far as armed confrontation.”

US tariffs have no effect on China

The use of huge tariffs will have no effect on China’s trade practices, said Katherine Tai, the US trade ambassador, who called for a defensive strategy by betting on the return of manufacturing to the United States. Washington, in particular, has criticized Beijing for subsidizing its companies to boost its exports, which over time has resulted in undermining many industrial sectors in the United States. In addition, China has been criticized for imposing technology transfers on companies that want to do business in the Asian country.

“We currently have customs duties on more than $300 or $400 billion worth of Chinese imports,” the US ambassador recalled. “It hasn’t changed China,” and it hurts US businesses, she noted.

“We must continue our efforts to pressure China to change,” she said, however.

But Katherine Tai insists on the rapid development of “new tools”: “this is the investment, it is the relocation and rebuilding of our production base”. “This is the plan we should pursue in the future,” she emphasized.

Oil purchases: China and Saudi Arabia want to replace the king’s dollar with the yuan