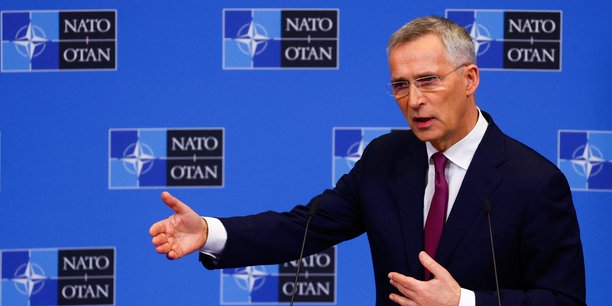 While Russian foreign ministers Sergei Lavrov and Ukrainian Dmytro Kouleba could meet “in a week or two”, according to their Turkish counterpart Mevlüt Cavusoglu, who hopes “the two sides will meet and agree on a lasting ceasefire” because it is “impossible to negotiate under arms pressure” and that Russian troops are “not withdrawing but repositioning” in Ukraine, Ukraine’s secretary general said Thursday. NATO, Jens Stoltenberg, expecting “additional offensives”. from Moscow.

“According to our information, Russia is “trying to regroup (its forces) and strengthen its offensive against the Donbass region while maintaining pressure on Kiev and other cities,” Jens Stoltenberg estimated during the meeting. “Therefore, we expect additional offensive actions which will cause even more suffering,” he explained.

Moscow on Tuesday said it was “radically reducing” its activity toward Kiev and Cherniguiv (North) after the Russian-Ukrainian talks in Istanbul, before it appeared to reconsider these announcements. Indeed, Russian attacks on these two cities in northern Ukraine continued on Wednesday.

“Russia has constantly lied about its intentions. We judge her only by her actions and not by her words,” the head of NATO said. “Clearly we have seen very little will on the part of Russia to find a political solution” to the conflict, he stressed, believing that the military support to Ukraine “has enabled it to strengthen the negotiating table.

Same story Wednesday night for Volodymyr Zelensky: “We don’t believe anyone, not a single fancy sentence,” Ukraine’s president declared, adding that Russian troops were regrouping to attack the Donbass region. “We are not going to give anything. We will fight for every meter of our territory,” he said.

No progress in negotiations, according to Le Drian

Ukraine’s Defense Ministry spokesman Oleksandre Motuzyanyk had previously emphasized that he had noted the departure of certain units from Kiev and Cherniguiv, but “no mass withdrawal of Russian troops from these areas”, contrary to the promise made. previously by Moscow to “radically reduce” its military activities in this area.

While Wednesday’s negotiations had made it possible to reach a consensus between the Russian and Ukrainian negotiators, “nothing has progressed” during three weeks in the negotiations,” said French Foreign Minister Jean-Yves Le Drian, adding that they do not see any action from Moscow that demonstrates a change of position.

“I read words, I read statements, I see no action. To my knowledge, no withdrawal measure has been taken with regard to the occupation by the Russian armed forces in Ukraine,” Jean-Yves Le Drian stated in an interview with RFI and France 24.

“It is possible that, given the difficulties the Russian military has in Ukraine, the plans will be reassessed; but it is also possible that this period in which more in-depth talks are announced will be one that will be used by Russia to rebuild its armed forces,” he added.

“Trust is acting (…) and for the time being they are not there,” declared the head of French diplomacy. “It is true that there was an event around the negotiations in Istanbul, but the discussions started three weeks ago (…) with a less spectacular side. But so far nothing has progressed.”

During this negotiating session, Ukraine nevertheless offered to adopt a neutral status in exchange for guarantees of its security, which constituted the most detailed and concrete proposals for a way out of the crisis since the beginning of the invasion. Ukraine’s proposal means it would not join military alliances and house foreign military bases on its territory, Ukrainian negotiators explained. The security guarantees Ukraine demands in exchange for its neutrality would be identical to the provisions of Article 5 of NATO, which constitutes a collective defense clause. Poland, Israel, Turkey and Canada could be among the guarantors of this possible mechanism.

“If we succeed in consolidating these essential provisions, and for us this is the most fundamental, then Ukraine will be able to effectively resolve the issue of its current status as a non-block and non-nuclear country in the form of permanent neutrality,” said Ukrainian negotiator Oleksander Chaly.

“Military maneuvers on our territory will take place with the consent of the guarantee countries.”

Ukrainian negotiators believed these proposals were sufficiently substantial for a summit to be held between Ukrainian Presidents Volodimir Zelensky and Russian President Vladimir Putin. They said they were now waiting for Moscow’s response to this offer, made during the first peace talks in the direct presence of more than two weeks between the two countries.

Kiev is also proposing a 15-year consultation period on the status of Crimea, which was annexed by Russia in 2014. However, these consultations could only begin with a full ceasefire on the ground.

Hope for an end to the conflict: Russia presents Ukraine’s “constructive and substantial” proposals to Putin