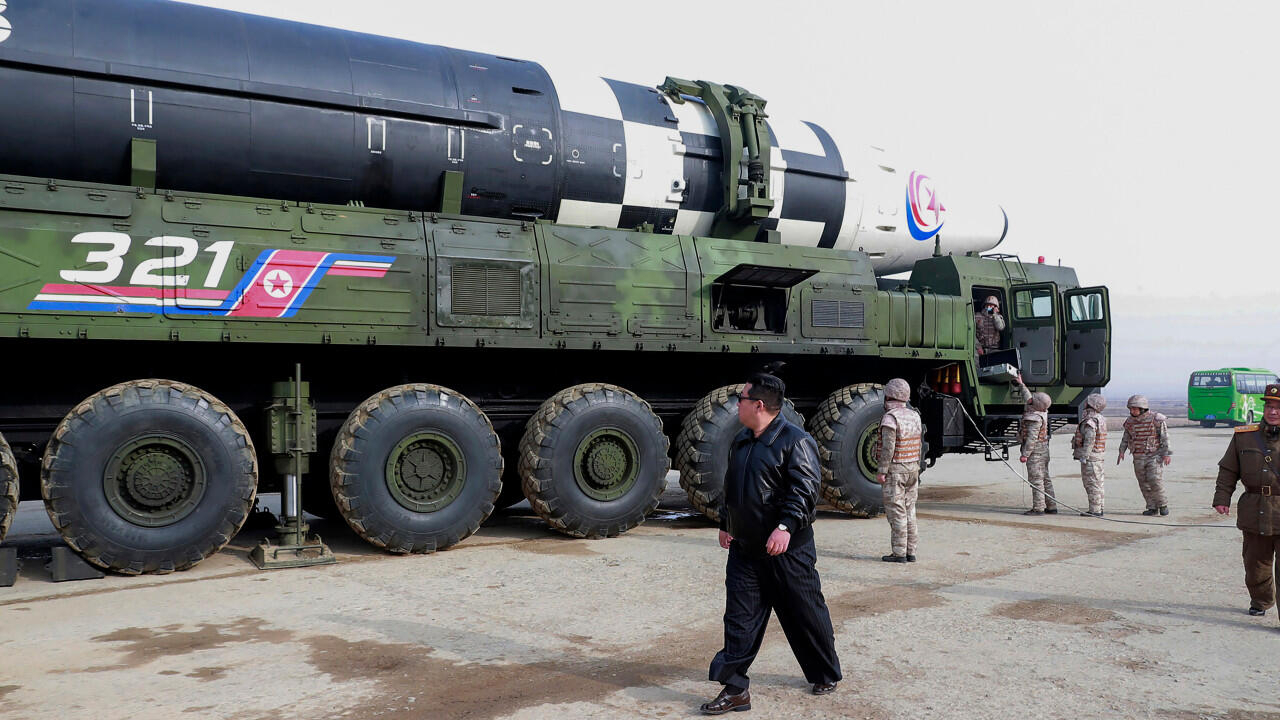 North Korean leader Kim Jong-un, who oversaw the firing of the country’s most powerful intercontinental ballistic missile (ICBM) on Thursday, March 24, said he was ready for a “long-term showdown” with the United States. Following concerns from neighboring countries and outrage from the international community, doubts have been raised about the nature of the missile launched.

Washington and Seoul Are Convinced North Korean Regime Has Rigged Thursday’s launch of its intercontinental ballistic missile (ICBM)reports, Sunday 27 March, South Korea’s Yonhap News Agency† “Allies believe the North again tested a Hwasong-15 ICBM on Thursday, the same type it fired in late 2017, according to multiple sources, Yonhap said. And this, while the North publicly claimed the launch of a Hwasong-17” – rocket was successful, the latest rocket model.

This analysis, which comes from intelligence and satellite data, is based on the appearance of the rocket’s rocket motor, precisely on the number of nozzles and the combustion time of the projectile’s first stage, both hallmarks of the Hwasong -15 and not Hwasong-17.

Separately, experts also raised doubts about the North Korean account when they found that the photo taken during the missile launch showed a clear sky in Pyongyang, while it was cloudy in the North Korean capital at the time.

Bee @JamesMartinCNSwe agree with @ColinZwirko that some of the footage released by North Korea comes from the failed test on the morning of March 16 rather than the successful afternoon test of March 24.

The shadow of the TEL is much closer to a morning launch than an afternoon launch. pic.twitter.com/2uzYo02G52


They also noted that many images from the March 24 test do not match satellite images of the launch site.


Are these images from the March 16 rocket test? This ended in failure., the projectile that exploded in mid-air over Pyongyang shortly after it was launched from Sunan airport, north of the capital. The regime is silent about this event.

According to analysis by the Japanese Ministry of Defense, the missile flew 71 minutes before falling in the exclusive economic zone, in the Sea of ​​Japan, about 150 km west of the Oshima Peninsula, on the northern island of Hokkaido.

“Since the ballistic missile flew at an altitude of more than 6000 km this time, which was much higher than the Hwasong-15 ICBM launched in November 2017, the current ICBM is believed to be a new ICBM,” said the Japanese minister. of Defense. Makoto Oniki said on March 24.

The South Korean military has since downplayed the data, Yonhap said, explaining that the projectile fired last week could very well be a Hwasong-15 with a lighter warhead designed to fly seemingly like a Hwasong-17. , with a wider range.

Indeed, the missile fired on Thursday flew higher and further than any previous ICBM tested by the nuclear-armed country. That makes it capable of hitting any part of US territory.

First unveiled in October 2020 and dubbed a “monster rocket” by analysts, the Hwasong-17 had never been tested before. And this in violation of the moratorium on intercontinental ballistic missile launches that Kim Jong Un committed to in 2017.

The North Korean leader, who personally oversaw the March 24 trial, footage released in North Korea shows that he is so proud that he ordered the filming of a propaganda clip in which he appears in a military suit . walk with officers past a huge missile.

The regime has never hidden its priority: to develop an ICBM capable of carrying multiple conventional or nuclear warheads, each of which follows an independent trajectory and is difficult to intercept by anti-missile systems.

“What matters with (Hwasong-17) is not how far it can travel, but what it can potentially carry, ie multiple warheads,” said analyst Ankit Panda at AFP.

UN resolutions prohibit North Korea, which has been hit by severe international sanctions for its nuclear and weapons programs, from conducting ballistic missile tests, which has not stopped Pyongyang from conducting about ten such tests since the beginning of the year. feed.

But so far they have not been intercontinental missiles, even though Washington and Seoul suspect the North Korean regime may have tested certain ICBM systems during these launches.

Hwasong-15 or Hwasong-17, for Kim Jong Un the message remains the same, as summarized by Jeffrey Lewis, of the Middlebury Institute in California, on Twitter : “I’ll be able to nebulize you if you invade me. So don’t!”