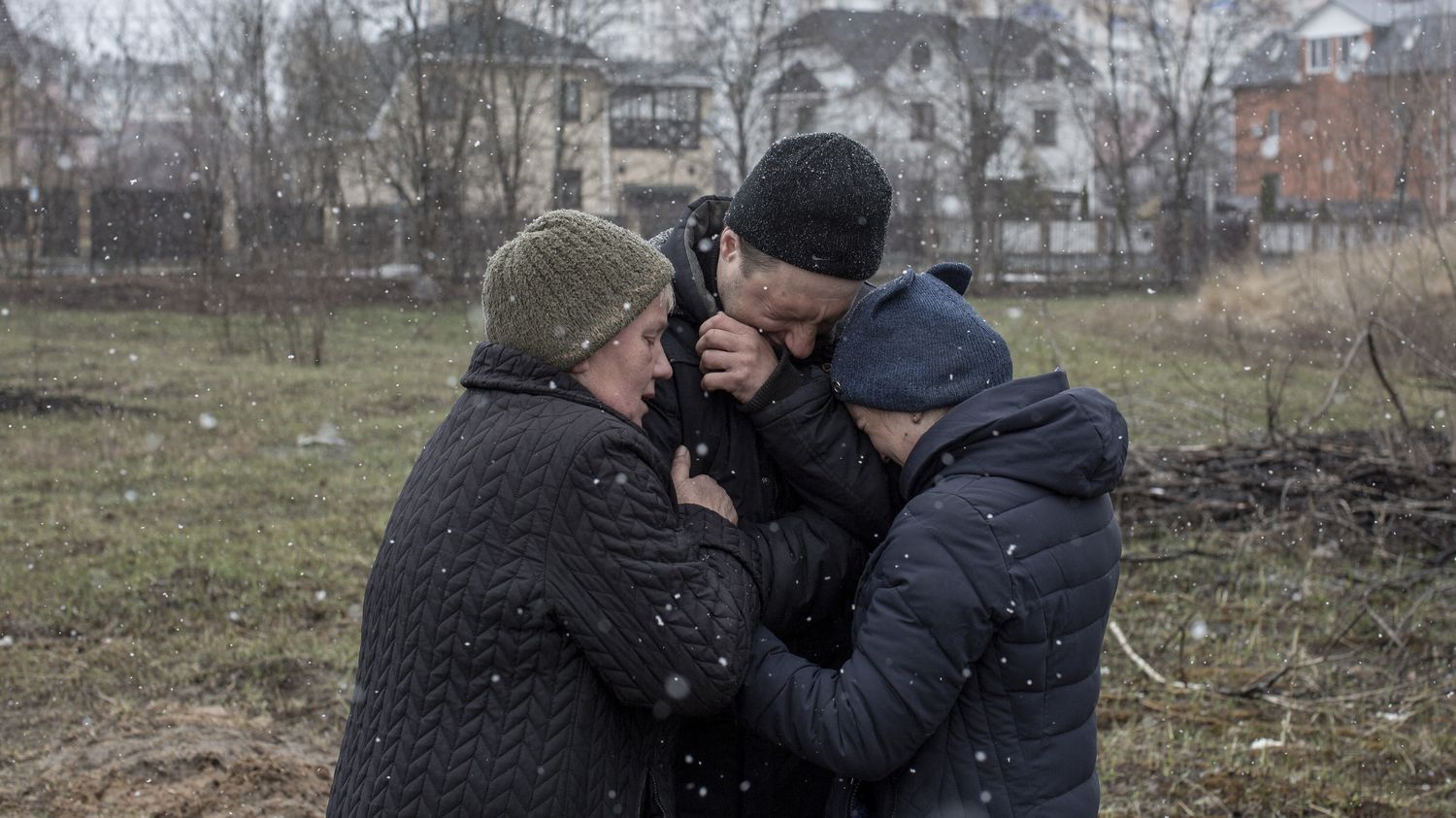 They took place between February 27 and March 14 in the occupied territories of Chernihiv, Kharkov and Kiev. Human Rights Watch, which interviewed ten witnesses or survivors, reported one case of repeated rapes, robberies and several cases of summary executions and threats of execution. Revelations in recent days are in line with the discovery of mass graves and hundreds of bodies of civilians in the Kiev region. Ukraine’s Attorney General Iryna Venediktova said the bodies of 410 civilians were found in areas recaptured from Russian forces.

Among these documented crimes, the organization describes two summary executions that killed seven Ukrainian civilians. The first took place in the village of Staryi Bykiv, in the Chernihiv region, on February 27. Three days after the start of Moscow’s offensive in Ukraine, Russian soldiers arrested and executed six men from three different families, according to testimony collected by Human Rights Watch. The NGO interviewed Viktoria, the mother and sister-in-law of two of the victims: “The soldiers told us not to worry, that they would scare them a little and then let them go. We walked 50 meters… and we heard shots,” she trusts. She will find their bodies the next day.

“They were lying there. There were gunshot wounds to their heads. Their hands were tied behind their backs. I looked at my son’s body, his pockets were empty.”

Viktoria, mother of a victim

Less than a week later, on March 4 in Boutcha, northwest of Kiev, “Russian troops have arrested five men and summarily executed one of them,” reports Human Rights Watch, based on the testimony of a teacher who saw the execution. This witness, along with 40 other residents, was forcibly brought to a village square by Russian soldiers. These civilians waited several hours, then soldiers arrived with five men and ordered them to kneel.

“The Russian soldiers removed the t-shirts from these men. They shot one of them in the neck. The man fell, women screamed. The other four men kept kneeling.”

A woman who saw a summary execution

According to this teacher, the civilians who had been forcibly brought to this square stayed for several hours before being escorted home by the Russian soldiers. five days later, “the young man’s body was still in the place where he had been murdered”, said the witness.

Human Rights Watch added that a Ukrainian man and his son were threatened with execution on March 4 in their village of Zabuchchya, on the outskirts of Irpin, after Russian soldiers found a shotgun and a bottle of petrol in their yard. Two days later, Russian soldiers shot a woman and a 14-year-old girl in Vorzel as they emerged from the basement where they had taken refuge, a man who was on the scene said. “Russian soldiers stormed that same basement and threw a smoke grenade inside. Several people panicked and fled outside, where Russian soldiers fired at them,” reports the organization.

A woman victim of repeated rapes

During its investigation, Human Rights Watch was able to collect the words of Olha (first name changed), a 31-year-old Ukrainian woman who claims to have been repeatedly raped and beaten by a Russian soldier in the village of Malaya Rohan, in the Kharkiv region. The facts took place on March 13, according to his testimony.

The young woman had taken refuge in the basement of a school with her 5-year-old daughter, her mother, her sister and her brother when a Russian soldier broke into the establishment. The soldier took her to a classroom on the second floor where, pointing a gun at her, he ordered her to undress and then perform oral sex on him. The NGO mentions several forced relationships. According to the victim’s testimony, the soldier placed a knife under her throat and then wounded her with this weapon at the level of the neck and one cheek. He hit her with a book and punched her several times, Olha said.

“While I was getting dressed, the soldier told me that he was Russian and that he was 20 years old. He said I reminded him of a girl he went to school with.”

The Russian soldier left the school the next morning. The NGO was able to consult photos that confirmed Olha’s words and showed his injuries to the face and neck.

According to Human Rights Watch, “many Ukrainian citizens” also told “that the Russian troops were taking away food, firewood, clothing and other items such as chainsaws, axes and gasoline” in the territories they occupy.

The organization continues its research work in Ukraine. “We have received information, allegations about other executions and sexual assault,” confirms with franceinfo Fred Abrahams, deputy director of the Human Rights Watch program office. Three allegations of sexual assault against Russian soldiers, in the Chernihiv region and in Mariupol, are being verified. The NGO is also trying to find out the facts in Boutcha. An NGO researcher went there on Monday.

What will be the size of? “apparent war crimes” that Human Rights Watch is starting to document in Ukraine? “Our report documents only a small number of crimes. We fear there are more.”† Rachel Denber points out. His colleague Hugh Williamson, director of the Europe and Central Asia division, points to the case of the confirmed summary execution in Boutcha on March 4. “A month later, we see these horrific images of hundreds of bodies. We do not yet know how these people died, but we are concerned that the tactics identified in this case on March 4 may have continued for weeks.”