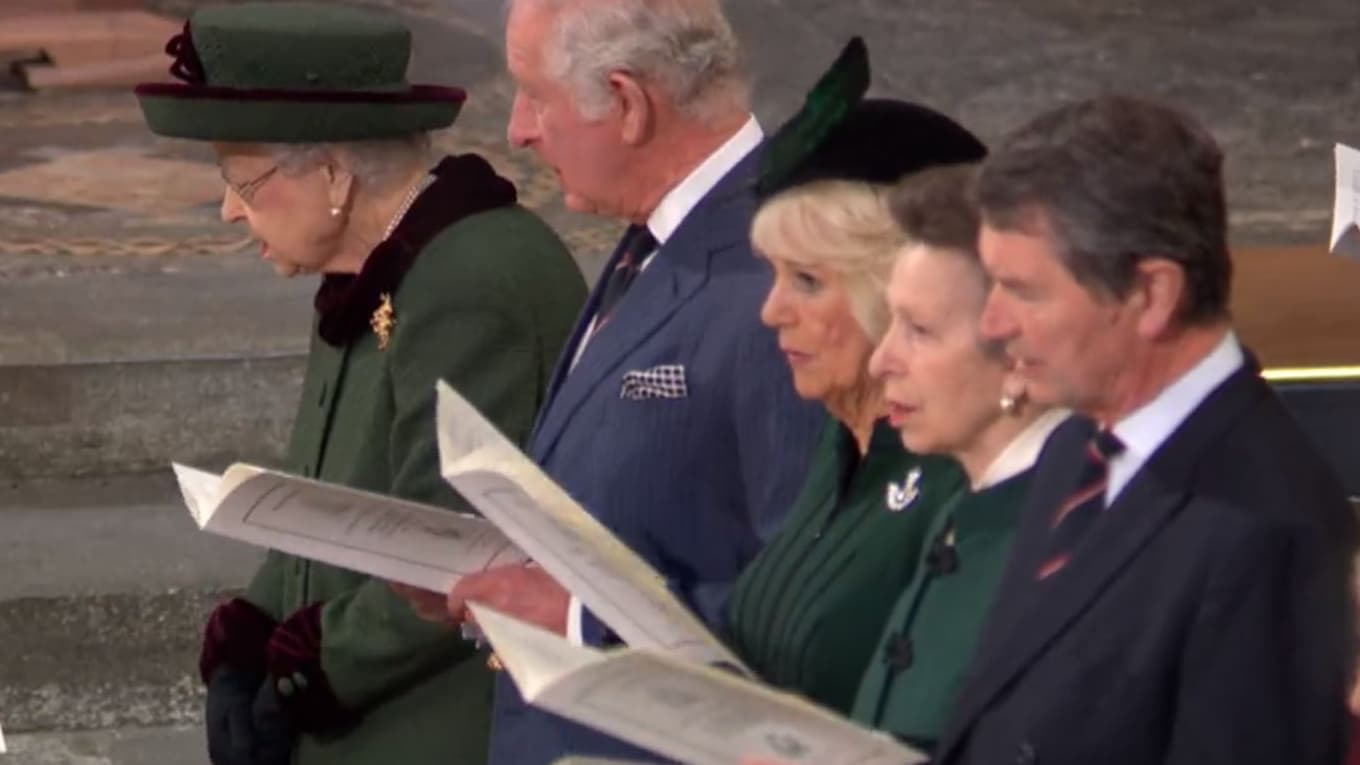 The queen seems scarred and moved

When the Queen did not appear in public, the photographers were able to capture a snapshot of the monarch, through the window of her vehicle, next to Prince Andrew.

The British press is also broadcasting photos taken during the ceremony honoring Prince Philip. The queen appears there with her eyes shining with tears.

Monarchs from all over Europe are here

In addition to the entire royal family – with the exception of Harry – monarchs from all over Europe have come to pay their respects to Prince Philip.

The King of Spain Felipe came to attend this ceremony, as did Prince Rainier of Monaco, without Charlène, still recovering, and Philippe, King of the Belgians.

The ceremony is over

The Royal Family walks out of Westminster Abbey to ring the bells and show the public eye. The Queen, on the other hand, again passed through a side door of the abbey, on Prince Andrew’s arm.

The exit is very ceremonial and is done in the order of succession to the throne. Prince Charles therefore came out first, followed by his son, William, accompanied by Kate Middleton and their children, George and Charlotte.

The Queen attends Mass in honor of Philip

The BBC is the only media with the right to broadcast footage of the ceremony. We see the Queen standing next to Prince Charles. She is dressed in a green coat, as are her daughter, Princess Anne, and daughter-in-law, Camilla. It is indeed the color of Scotland, and thus that of Prince Philip, Duke of Edinburgh.

The Queen is in Westminster Abbey

The Queen took a back door to access Westminster Abbey and avoid the fatigue of a long journey.

If the public could not see her entering the abbey, the presence of the royal banner hovering above the abbey is a sign that the queen is indeed inside.

The Queen arrived with Prince Andrew. A beautiful symbol, because the prince has just emerged from a disastrous affair for the image of the royal family. The prince had to give up all his official activities. He was stripped of all his sponsorship and military duties.

William and Kate arrive with their children

Prince Charles arrived with his wife, Camilla Parker-Bowles. The Queen gradually hands over to her eldest son, who will succeed her upon her death. The sovereign recently announced her wish for Charles’s wife to become queen consort. A strong signal sent Camilla, who has managed to cultivate her popularity with the British in recent years.

The British Prime Minister attends the ceremony. Boris Johnson paid tribute to the Queen on the occasion of her jubilee on February 6.

“Today marks a truly historic moment as Her Majesty the Queen becomes the first British monarch to celebrate a platinum jubilee, the Prime Minister said. “Inspiring devotion to duty and unwavering devotion to the nation”.

Prince Andrew will accompany the Queen

According to the program of the ceremony, Prince Andrew will be present. Long described as Elizabeth II’s favorite son, he keeps a low profile after being accused by American Virginia Giuffre of sexually assaulting her in 2001. Threatened with a trial in the United States, the 61-year-old prince finally reached a confidential agreement with his accuser, but his reputation suffered badly.

Prince Harry, absent from the ceremony

Prince Harry and his wife Meghan announced in 2020 that they would give up their leading role in the British royal family. The couple and their two children now live in California.

The prince gave no explanation for his absence. At least the tabloid press got their hands on the information. the Sun headlined: “Harry repulses Philip”.

He felt that when he last came for the inauguration of the statue of Princess Diana, his safety was not sufficiently assured. He claims protection from Scotland Yard, which refuses.

A tribute to Philip, the Queen’s husband for 73 years

The ceremony for Philip is meant to pay tribute to the one who supported Elizabeth II for more than seven decades and with whom she had four children.

Her death last April, shortly before her 100th birthday, took place under strict anti-covid restrictions, which had imposed a small-group funeral, with the symbol of the image of the Queen sitting alone in Windsor’s chapel.

Members of the British royal family and many foreign crowned heads are expected on Tuesday.

His services have so far cast doubt on his presence. But the monarch, who will celebrate her 96th birthday in April, appears on the program published by Buckingham Palace of the tribute paid from 10:30 GMT to Prince Philip, who died on 9 April 2021 at the age of 99. His presence was confirmed only an hour ago.

The Queen’s public appearances have become very rare in recent months. Especially since the sovereign had Covid at the end of February. She met Canadian Prime Minister Justin Trudeau on March 7.

However, in mid-March, she had at the last minute canceled her participation in a religious service organized as part of the annual Commonwealth Day when she was scheduled. She had ultimately preferred to be represented by her son Charles