Home » The embargo on Russian energy could cost the French economy between 3.6 and 7.2 billion euros 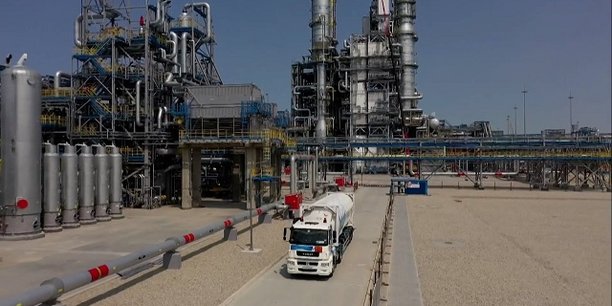 The crimes committed by the Russian military on Ukrainian soil have rekindled discussions about the need to tighten sanctions in Europe. After the United States and Canada,European Parliament President Roberta Metsola on Monday called on leaders of the 27 to impose “binding embargoes” on Russian energy imports, accusing Russia of committing “war crimes” in Ukraine. “Europe must accelerate its policy of zero dependence on the Kremlin, free itself from Russian energy supplies, introduce binding embargoes and stop indirectly financing the bombs,” he said. said the official at the opening of the plenary session of the European Parliament in Strasbourg.

This statement comes as leaders of the 27 “urgently” discuss new sanctions against Moscow, according to EU High Representative Josep Borrell. Paris and Berlin recently decided to expel Russian diplomats from their territory.

How to stop the Russian war machine without paying a high price?

As the 27 members of the European Union announce a new salvo of sanctions on Wednesday, the Economic Analysis Council (CAE) has just unveiled a particularly illuminating note on the macroeconomic impact of a European embargo on Russian imports.

It seems that the overall impact would be “moderate” even if there are differences. Since the beginning of the conflict, European states have been faced with a particularly difficult dilemma. How to stop the Russian war machine without paying a high price for applying sanctions? As a reminder, Europe has already bought several tens of billions of euros in Russian gas and oil since the start of the conflict. At the foot of the wall, the states must overcome their divisions to announce a new set of measures against the Kremlin.

War in Ukraine: Europe has bought nearly €17 billion in Russian gas and oil since the start of the conflict

Highly variable effects depending on the country: from 0.15% of GNI to 5%

The robbery of Russian gas, oil or coal will of course have different consequences depending on the degree of exposure of the country. For France, economists David Baqaee, Benjamin Moll, Camille Landais and Philippe Martin estimate that the impact will be relatively “low”, estimated between 0.15% and 0.3% of gross national income (GNI takes into account the balance of income flows from abroad)or between EUR 3.6 and EUR 7.2 billion according to our calculations.

On the other hand, Germany, whose economic model is largely dependent on energy-intensive industry, could suffer more from such an embargo. The negative impacts are greater with a GNI loss estimated between 0.3% and 3% in a pessimistic scenario, ie between 11 billion euros and 110 billion euros. On this point, the German coalition has also shown more reluctance than other eurozone superpowers to cut off Russian energy.

Finally, some states would bear the brunt of the consequences of such a cut. These are in particular Bulgaria, Finland, Lithuania, the Czech Republic and Slovakia. According to calculations by the Economic Analysis Council, these countries can lose GNI from 1% to 5% of gross national income.

Economies and companies that can minimize the impact of the shock

This relatively modest impact on the European economy can be explained by the ability of states and companies to withstand such a shock. The two long years of the pandemic have shown that many economies can recover, despite the staggering decline in activity in many countries. “L”analyze historical experiences of very strong shocks (Fukushima in Japan or Covid-19 in China) with potential effects along production value chains also show that companies, individually, and theeconomy, generally be able to minimize the impact of the shock”, explains the Prime Minister’s Research Center.

The analysis center led by economist Philippe Martin believes that companies and countries will be able to find alternative energy sources and intermediate or end products in the short term. However, replacement capacity may be limited.

Saudi Arabia and the United Arab Emirates have recently unwillingness to increase their oil supply† US shale producers are currently held back by supply chain bottlenecks and labor shortages. Finally, the increased supply of liquefied natural gas (LNG) in Europe requires specific terminals that are often absent in the ports of the Old Continent.

Plus, the prospect of a lengthy conflict can be a game-changer. Indeed, greater energy independence in Europe will require significant investment in more sustainable energy sources. At this point, however, France is the only country in the European Union that has failed to meet its renewable energy targets in gross final consumption.

Renewables: why France’s slowdown is a problem

Tariffs are more effective than an embargo, says CAE

One of the other options on the table is an increase in customs duties on Russian energy imports, for example by 40%, would be “more effective than a strict embargo,” the study estimates. It would lead to a “very sharp reduction in imports”, of about 80%, while dividing by 3 or 4 the economic losses of the countries most dependent on Russia are “greatly reduced”.

Economists nevertheless recommend the implementation of fiscal and monetary policy targeting the sectors and households most disadvantaged by the rise in gas prices that an embargo or increase in customs duties would trigger in order to avoid a strengthening of the energy shock.

It is still difficult at this stage to estimate all the macroeconomic consequences of the war. Most forecasting firms have revised their 2022 growth rates downwards. After a strong recovery in 2021 in the wake of the plunge in 2020, the French economy is suffering from rising energy prices. After industry, tertiary companies are currently facing rising costs.

The most recent Markit PMI index revealed on Tuesday, April 5, indicates that: “Inflation of the prices paid accelerated strongly and reached an all-time high in March, forcing French service providers to raise their prices at a record pace.” If inflation appears to affect France less than most European countries, the introduction of a eurozone-wide embargo on Russian energy will inevitably affect energy prices and thus short-term growth. This prospect threatens to make it more difficult for European diplomats to reach agreement on sanctions.