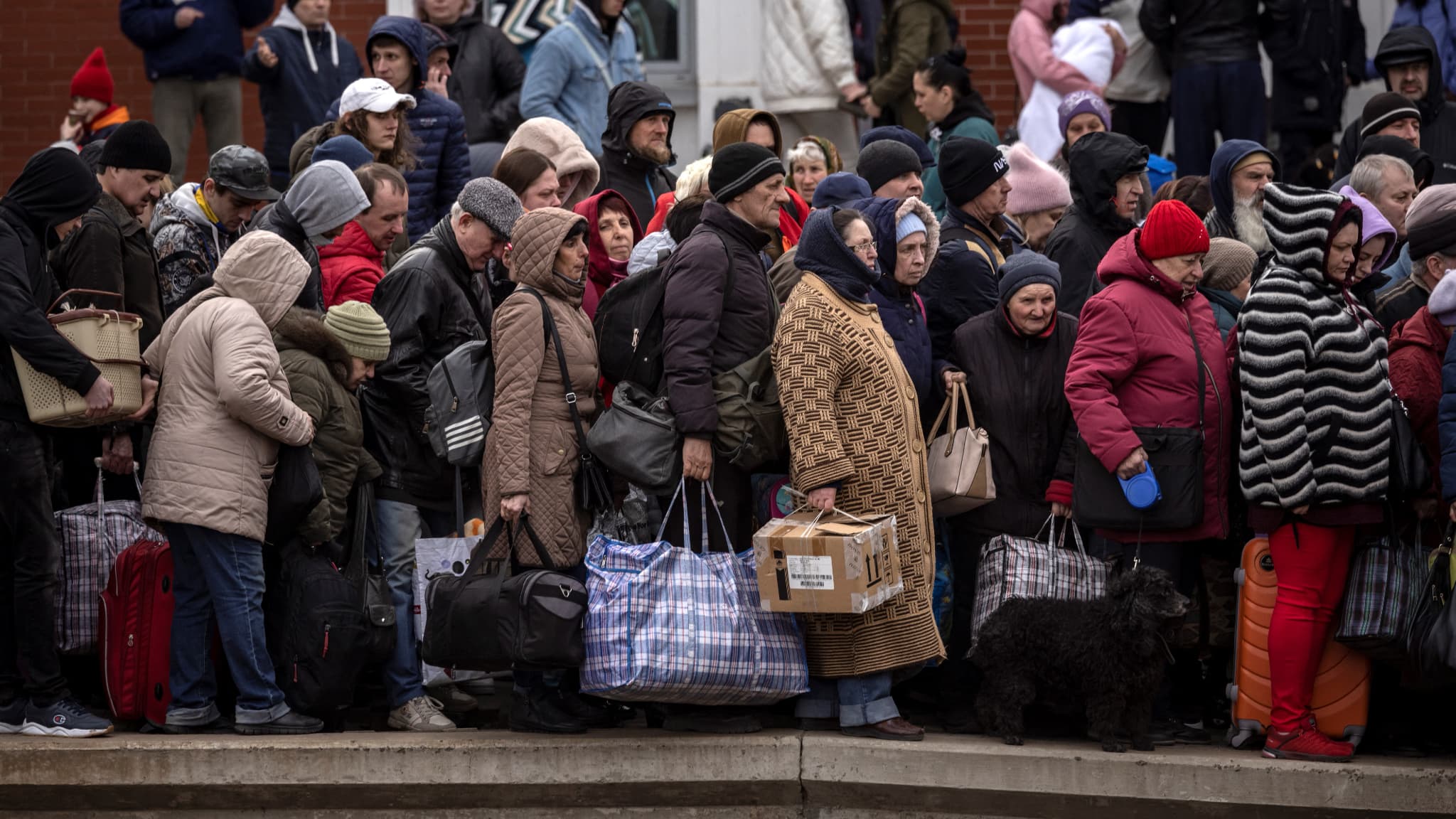 While the images of Boutcha continue to impress internationally, the consequences are being felt for Russia. Moscow was indeed sanctioned by a vote in the UN this Thursday, the 43rd day of the conflict.

As a seemingly inevitable battle in the Donbass approaches, Ukrainian authorities are speeding up the evacuation of civilians as much as possible. At the same time, Russia admits for the first time that it has suffered “significant” losses.

• Evacuation trains bombed in the Donbass

While the Donbass prepares for a major Russian offensive, the civilian population there still tries to flee. To achieve this, some decide to take the train. However, the director of Ukraine’s railways, Olexander Kamishin, assured that Russian bombing was blocking the evacuations.

“The enemy carried out air strikes on the track next to the station of Barbenkovo, the Donetsk line. It is the only railway exit route from cities like Sloviansk, Kramatorsk and Liman that is under Ukrainian control,” this official wrote on Telegram posts, adding that three trains were blocked in Sloviansk and Kramatorsk.

At the same time, the Ukrainian army is settling in to defend its positions in the east of the country, authorities fear being overwhelmed. Foreign Minister Dmytro Kouleba therefore asked NATO to quickly supply them with weapons. “Either you help us now, and I’m talking days, not weeks, or your help will come too late,” he warned on Thursday.

For their part, the pro-Russian authorities have announced that about 5,000 people have died in Mariupol and that “60 to 70% of the housing stock has been destroyed”.

• Groups of researchers in Boutcha, Hostomel, Irpin and Borodyanka

Answers soon? Ukraine’s Attorney General Iryna Venediktova tweeted that investigators were present in Boutcha, Borodyanka, Irpin and Hostolomel to “document all the war crimes committed by the occupiers”. This news comes as 26 bodies were discovered on Thursday in the rubble of buildings in Borodyanka.

The UN should soon participate in the investigations. Indeed, United Nations Deputy Secretary-General Martin Griffiths was in Boutcha on Thursday, and assured that an investigation into the civilian massacre was “the next step”.

After a vote on Thursday, the UN General Assembly suspended Russia from the UN Human Rights Council on charges of war crimes against Moscow. A rare procedure, as only Libya had suffered the same fate in 2011. Only 24 countries voted against, including China, with 93 in favor and 58 abstentions.

Ukraine was quick to respond to this news, calling it “grateful”. “War criminals have no place in UN bodies dedicated to protecting human rights,” Foreign Minister Dmytro Kouleba said on Twitter.

Russia assures that the procedure was “illegal” and that it aims “to blatantly punish a sovereign UN member state that conducts an independent domestic and foreign policy”.

An important first. Last Thursday, Kremlin spokesman Dmitry Peskov admitted in an interview with British Sky News that the Russian army has suffered “significant losses” as part of the offensive in Ukraine.

“It is a huge tragedy for us,” said this close friend of Vladimir Putin.

However, it remains difficult to give an accurate figure on the number of Russians killed in the conflict. Indeed, experts assure that the figures revealed by the Ministry of Defense underestimate the balance, while the Ukrainian authorities tend to overestimate it.

“The Ukrainian people deserve our solidarity. That’s why I’m going to Kiev tomorrow (Friday),” the leader said at a press conference in Stockholm on Thursday. “I want to send a message of unwavering support to the Ukrainian people and their courageous fight for our common values,” she said.

This trip comes as the European Union has announced new sanctions against Moscow. For example, an embargo against Russian coal and the closure of European ports for Russian ships was ratified on Thursday.