Home » the story of this 33rd war day in Ukraine 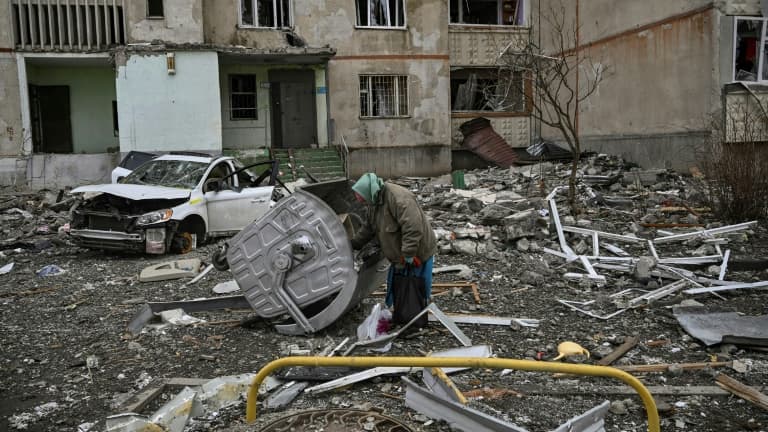 Ukrainian authorities counted at least 5,000 dead in Mariupol since the start of the conflict on Monday. Volodymyr Zelensky, meanwhile, his request to meet with Vladimir Putin was turned down. Update on this new day of conflict.

New round between Kiev and Moscow. As Russian and Ukrainian negotiators meet again on Tuesday for another round of talks in Istanbul, the question of Ukraine’s “neutrality” rises. However, President Volodymyr Zelensky makes it dependent on a favorable vote from the Ukrainian people.

But in a context where thousands of residents have left their homes and even their lands, where thousands of civilian casualties have to be counted and where the Russian army continues its operations, it is hard to imagine elections being held. And the reports communicated in recent days, especially in Mariupol, hardly suggest a truce in this conflict that has been going on for more than a month.

5,000 dead in Mariupol according to Ukrainian presidency

Tatiana Lomakina, an adviser to the Ukrainian presidency responsible for humanitarian corridors, told our colleagues at AFP that at least 5,000 people have died since the start of the conflict in the city of Mariupol, which is under siege by the Russian army.

“No people have been buried for ten days because of the continuous bombing,” the adviser also stated, who estimated that “given the number of people still under the rubble (…), there could be about 10,000 dead”.

Asked on BFMTV earlier this Monday, Tatiana Lomakina gave the same estimate and warned of the humanitarian situation of the residents who cannot leave Mariupol.

At the same time, new fighting took place on Monday in several places around Kiev, most notably in Stoyanka, on the western outskirts of the capital. Near Kharkiv, Ukrainian troops managed to regain control of a village. Finally, new fires broke out in the Chernobyl nuclear power plant area, prompting Kiev to demand the “demilitarization” of the sector under the auspices of the UN.

• The city of Irpin taken over by the Ukrainian army

Ukraine announced Monday evening that the city of Irpin, the scene of fierce fighting on the outskirts of Kiev, has been recaptured from Russian troops.

“The city has now been liberated, but it is still dangerous to be there,” Interior Minister Denys Monastyrsky said on television, confirming what Oleksandre Markouchine, the mayor of this place, had previously said: ruined location on the northwest entrance to the capital. “In fact, this is now happening in a parallel way: the armed forces are advancing, the police are advancing and a full clean-up is immediately done on the street,” the minister said again.

The main checkpoint on the road to Irpin from Kiev was reopened on Monday, two weeks after it was closed to media following the death of an American journalist.

The head of Russian diplomacy ruled that a meeting between Vladimir Putin and his Ukrainian counterpart Volodymyr Zelensky would be “counterproductive” for the time being and conditional on the acceptance of Moscow’s demands in the negotiations.

Vladimir Putin “said that he would never refuse a meeting with President Zelensky, but this meeting must be well prepared (…) The conflict in Ukraine has worsened over the years, many problems have accumulated,” said Sergei Lavrov.

“So to meet and say, ‘What do you think? Russian and Ukrainian are expected in Istanbul on Monday for another discussion session.’

The Russian diplomat confirmed the demands made by the Kremlin from the beginning of the offensive against Kiev on February 24: the protection of the people of Donbass, as well as the “demilitarization” and “denazification” of Ukraine.

• Russia wants to limit its access to nationals of different countries

At the same time, Sergei Lavrov announced that a decree is in preparation to limit access to Russian territory to nationals of countries responsible for “unfriendly” acts, amid a wave of sanctions against Moscow.

“A draft presidential decree is being prepared to introduce retaliatory measures regarding visas, in connection with the unfriendly actions of several foreign governments,” Sergei Lavrov told a meeting of the ruling United Russia party, without the countries and types of people. that are sanctioned in the country. special.

However, in the face of Western economic sanctions, Moscow published a list of “unfriendly” countries in early March, including the United States, members of the European Union, United Kingdom, Canada, Japan, Switzerland, Taiwan. , South Korea , Norway and Australia.

“No other solution” in the face of “military censorship”: the Russian independent newspaper Novaya Gazeta announced on Monday to suspend its publications until the end of the intervention in Ukraine, in full hardening of the Kremlin against the discordant voices.

pillar of investigative journalism, Novaya Gazeta has been publishing investigations into corruption and human rights violations in Russia for almost 30 years. In 2021, this work earned the editor, Dmitry Muratov, the Nobel Peace Prize.