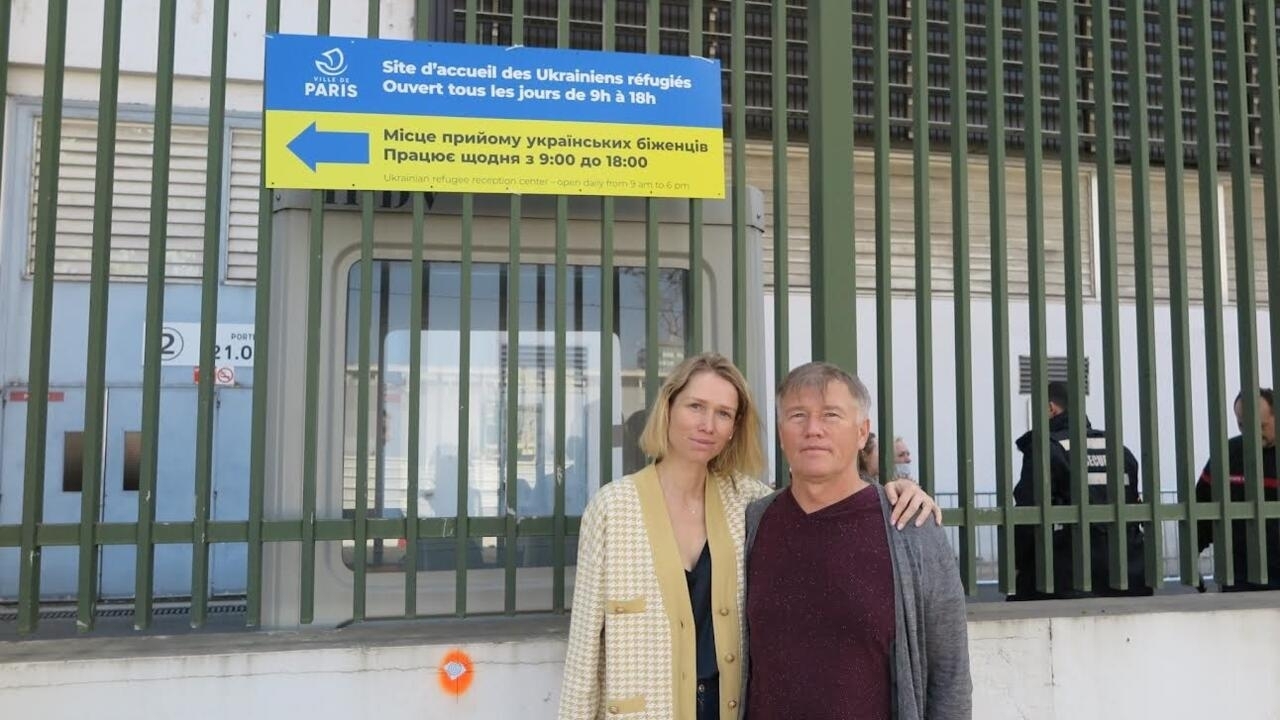 A shelter for displaced Ukrainians has been opened in Paris. France 24 went in search of those fleeing the war. Parisians support them in sometimes complicated administrative procedures, despite the opening of this one-stop-shop.

“The prefecture of Paris is closed on the weekend,” a group of security agents explains to disoriented Ukrainian refugees, who just arrived at the gates of the city on Saturday, March 26. Ukraine Home Center located in one of the halls of the Porte de Versailles exhibition center, in the south-west of Paris. A place specially opened by the city of Paris and managed by the association France Terre d’Asile, to welcome and guide displaced Ukrainians.

The Paris City Hall website states that this center is open seven days a week, from 9am to 6pm, but today the administrative services are closed. Only Ukrainians who need shelter are taken care of. Migrants who arrive in the center for other reasons stoically welcome the news and obediently leave the building clutching their personal belongings and identity papers.

Martine and her husband Pierre, a couple from Paris, came to accompany Svetlana, 53, and her daughter Alyssa, 19. All four don’t seem to know what to do after learning that the center’s administrative services are closed. They linger in the early spring sun, exchanging phone numbers with a Russian-speaking woman who has come along with another group of displaced Ukrainians. She’s more seasoned and full of advice for navigating the maze of French bureaucracy.

When asked how they met their protégés, Martine replies, “By Mozambique!”, drawing a smile behind her mask. “My son lives in Mozambique, where he has a friend who asked if we could help her by hosting Ukrainian friends in France.” The French couple agreed to come to the aid of the two women without hesitation, despite knowing nothing of their past.

A grueling journey through Europe

Every day, thanks to Google Translate, Martine and Pierre succeed in breaking the language barrier with their guests. Using the translation tool and Google Maps, they found out where Svetlana and Alyssa came from: a town called Dnipro, located on the bank of the Dnieper River. The two women were able to tell about their exhausting five-day journey to reach France. After leaving Ukraine, mother and daughter traveled by bus from Poland to Berlin, then took a plane from Berlin to Paris, before arriving Wednesday in Meudon, on the outskirts of Paris, a few kilometers from central Ukraine. Martine and her husband came to collect them this Saturday morning, from someone else who could no longer accommodate them.

the United Nations High Commissioner for Refugees (UNHCR) Monday identified a total of more than 3.8 million Ukrainian migrants since the start of the conflict. Of PolandRomania and Moldova have hosted the most refugees and the migratory pressure on these three European states is increasing for the reception, but also for the resettlement of people on the go. So many displaced people are trying their luck and moving west, whether they have family or friends there or not.

Svetlana and Alyssa are not yet sure of getting the status of temporary protection, who offers asylum in France, but already “they want to be independent and find work, that’s the hardest thing,” says Martine. As of March 23 France welcomed 26,000 migrants from Ukraineof which only 10,500 received a temporary residence permit.

“A century ago my grandfather left Odessa by boat”

“Associations can provide accommodation, but individuals are better able to provide immediate answers, such as: find schools for kids, to feed people, to help them obtain documents,” explains Martine. “It is normal that I help, because a century ago my grandfather left Odessa by boat. He was on the run from the civil war in Russia. History repeats itself,” she says visibly moved.

At noon, a bus arrives and unloads a crowd of people. Many carry suitcases and backpacks, in the distance the cry of a baby can be heard. Migrants brought to the center of Accueil Ukraine by the Red Cross only stay there for one or two days before departing for other French regions.

At the same time, Olena and her father, originally from Cherkasy, a city southeast of Kiev, arrive at the gates of the shelter. “I invited my father to France for his birthday and also because it was children’s holidays, then the war broke out and he stayed with us,” says Olena, who lives in France. “We are here because my father had cancer and if something happens to his health, I want him to be covered by French social security.”

Like Svetlana and Alyssa, Olena and her father are asked to return on Monday to begin the process of obtaining a Vitale card. The Ukrainian swears that her father will stay with his family in Paris as long as the war lasts. “Everyone wants to go home,” she said with tears in her eyes.

This article has been adapted from English. Find the original here.