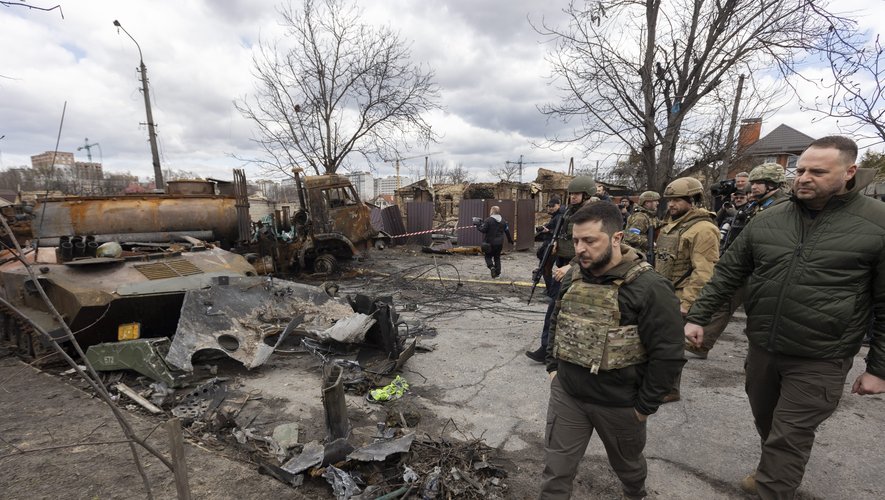 The non-governmental organization Human Rights Watch (HRW) said it had documented “several cases of violations of the laws of war by Russian forces” in Ukraine’s Chernihiv, Kharkov and Kiev regions. Citizen testimonials refer to summary executions, looting and rape.

The report is final. “Summary executions and other serious human rights violations have clearly been committed by the Russian armed forces,” said on April 3 that the human rights defense NGO, Human Rights Watch (HRW).

In this first document made public, the NGO cites cases of “violations of the law of war“clear. A rushed report after the discovery of hundreds of civilian bodies in” the city of martyrs Butcha this weekend† After just over a month of war in Ukraine, this could be a turning point. The images of the tortured bodies after the departure of the Russian occupying forces sent shockwaves across the planet.

These crimes, described as “apparent war crimes“, could be documented thanks to survivors and witnesses of the violence. In total, HRW conducted a dozen interviews on the spot “with eyewitnesses, survivors and secondary witnesses”.

Among the testimonials are clear executions summaries, “from six men in one case, and from another man in another case”, as well as numerous violence against civilians. Even more worryingly, some acts are dated at least February 27. From the first days of the conflict So.

The NGO interviewed Viktoria, the mother and sister-in-law of two of the victims: “The soldiers told us not to worry, that they would scare them a little and then let them go. We did 50 meters … shots heard,” she said.

They lay there. There were gunshot wounds to their heads. Their hands were tied behind their backs. I looked at my son’s body, his pockets were empty. – Viktoria, mother of a victim

“The cases we have documented bear witness to brutality and… unspeakable and deliberate violence against Ukrainian citizens,” said Hugh Williamson, Human Rights Watch director for Europe and Central Asia.rapesmurders and other acts of violence against persons detained by Russian forces should be investigated as war crimes.”

Another testimony, that of a woman, reports “several times in a school in the Kharkov region, where she had found shelter with her family on March 13”. She also claimed to have been “beaten and lacerated in the face and neck with a knife,” the NGO reports.

Answer for these crimes

“Those who were responsible for these crimes will be held accountable for them,” Emmanuel Macron warned France Inter on Monday, ruling that “what just happened in Boutcha imposes a new set of sanctions and very clear measures”.

As the European Union urgently grapples with new coercive measures, Paris on Monday announced the expulsion of 35 Russian diplomats, Berlin a “high number”, and the United States called for the “suspension” of Russia from the United Nations Council on Human Rights. Nations.

Joe Biden, who puts little faith in Moscow’s denials screaming onstage, again called Vladimir Putin a “war criminal” and called for a process† One must “keep all the evidenceUnderlined Michelle Bachelet, the High Commissioner for Human Rights.

Despite threats to his own safety, Volodymyr Zelenski went to Boutcha himself on Monday, wearing bulletproof vests surrounded by soldiers. In these streets that have been turned into an open-air cemetery, littered with the bodies of people shot at close range, some with their hands tied behind their backs, the Ukrainian president warned that it is now becoming more difficult to negotiate with Russia. “These are war crimes and they will be recognized around the world as genocide,” the Ukrainian president insisted.

“We want the whole world to see what happened, what the Russian army did”

“We know that thousands of people have been murdered and tortured, with limbs torn off, women raped and children murdered,” the Ukrainian president continued.

Invited to BFMTV on Monday evening, Ukraine’s Attorney General Iryna Venediktova said she was able to name each of these victims, explaining that the lifeless bodies of 410 citizens were sometimes found in these areas of the Kiev region, piled up in mass graves†

In total, “we counted 4,000 war crimes and we haven’t even been able to see what’s happening in Mariupol yet,” she explained. “For me it’s about war crimes and even humanitarian crimes“Among these victims, she said, are 168 children.