Home » Are the Russian military’s abuses part of the Kremlin’s plan? 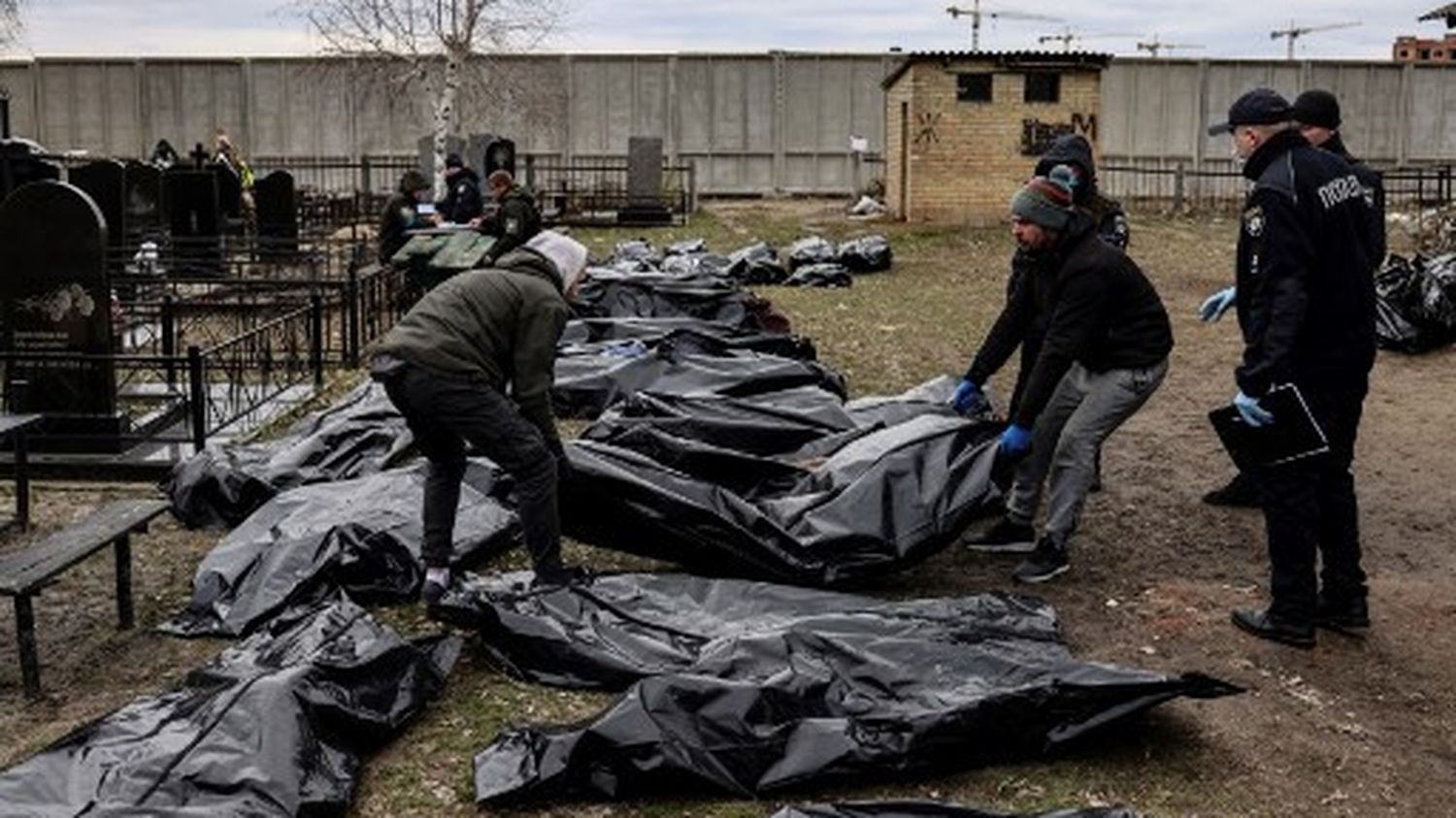 The world is still in shock at the discovery of numerous civilians in Boutcha after the withdrawal of the Russian army. Ukrainian President Volodymyr Zelensky on Tuesday, April 5, urged the United Nations to take action “straight away” against Russia with regard to “war crimes” committed in Ukraine. In the entourage of the head of state, some also shout a “zatchistka” — a word that literally means “cleansing” — a term that has sparked fear since the wars in Chechnya. In any case, this new armed conflict seems to be stirring up old demons in the Russian military. It remains to be seen whether these abuses are part of a military plan.

>> Boutcha massacre: can we speak of “genocide”, as Volodymyr Zelensky says?

This “cleaning” consists of methodically eliminating every adult male for carrying a weapon, house after house, while leaving all the inhabitants at the mercy of various forms of abuse. One of the most famous cases dates back to February 2000, when about 60 civilians were found dead in Novye Aldi, on the outskirts of Grozny (Chechnya). A few days after the capture of the city, Russian forces had relentlessly tracked down the rebel fighters. Women, children and old people had been too “shot in cold blood, with automatic weapons, at close range”† completed a field study by the NGO Human Rights Watch (in English)† Not to mention the fires, looting and rapes.

“Several reports then pointed to this cleaning strategy”explains Carole Grimaud Potter, professor of geopolitics, specializing in Russia† “TEach resident was suspected of terrorism and arrested before being questioned in detention centers. Some were tortured until confessions were obtained. Russia had already denounced †a provocation aimed at discrediting the operation of the Federal Armed Forces”. And Vladimir Putin had already underestimated the opposing forces.

The siege of Kiev failed, but the surrounding cities fell into chaos. Gostomel, Boutcha, Irpin, Motyzhin… Russia’s withdrawal reveals once again the magnitude of the violence against the population. These images of aligned corpses plunged Raphaël Pitti back into horror. The war emergency doctor carried out about thirty missions in Syria. In 2013, in Aleppo, more than 200 people were killed by the Syrian army, their hands tied, before being thrown into the river. For the doctor no doubt “it was really a matter of terrorizing the population as an example”.

On the ground, the Russian army had set up headquarters near Damascus in 2015, leaving the dirty work to the Wagner group and Chechen auxiliaries. In Syria it is in any case not directly involved in the abuses against civilians. It would still be necessary to know the rules of engagement she had drawn up for the units under her command. In other words: are these abuses committed in Syria a matter? “from a modus operandi or are they the result of a laissez-faire approach?” asks Raphael Pitti. “This means at the very least that the Russian General Staff has set no limits and they can be held accountable.”

“The way the Russians behave is typically toward what they know how to do. If these abuses were committed in Ukraine, it’s because there was no order to prove otherwise.”

It remains to be seen whether such actions are isolated or intentional. “We knew that Putin’s invasion plans included summary executions by his military and intelligence services”† just commented Richard Moore, the director of the British Secret Service, without giving further details.

It is difficult to make a decision at this point, because, of course, the rules for the deployment of the Russian army are secret. Some experts therefore prefer to remain cautious at this stage. “The first hypothesis is that of a unit that behaved badly”thus analyzes General François Chauvancy, interviewed by franceinfo. Was she beaten by the Ukrainian army and armed civilians? Has she made the people pay for what she has suffered?’ One of the researchers’ tasks will therefore be to identify the different units involved in the same sector. Naturally, “If several units have committed mass murders in the same city, the systemic character must be inferred”†

Some of Boucha’s survivors interviewed by BBC (in Russian) evoked varying degrees of behavior according to the Russian soldiers they encountered – from some form of compassion to the grossest brutality – presupposing non-uniform behavior according to the units or within the same unit. In particular, Ukraine accuses the 64th Motorized Rifle Brigade of committing the abuses, and all of its soldiers have been placed on a list of “war criminals”. Ukrainian military intelligence says this brigade will be sent to another front, after a temporary withdrawal to Belarus on April 4. According to this source, it would be up to Moscow to send them to their deaths and remove any witnesses to the atrocities.

British researcher Jack Watling opposite (in English) in addition a “Russian Tradition of Anti-Partisan Warfare” – to oppress the population by holding it collectively responsible for acts of resistance – and a “western counterinsurgency doctrine” – which consists in separating (and punishing, sometimes through extortion) the insurgents from the rest of the population. In other words :

“The population is being punished for supporting the Ukrainian army.”

“I think it’s deeply rooted in the culture of the Russian military”agrees Carole Grimaud Potter, eager to tackle this historic plot. “The Red Army was originally created to suppress anti-Bolshevik guerrillas. In this long tradition, a civilian can be an enemy or pose a threat.” And if the “zatchistka” does not have the value of a military doctrine, the researcher nevertheless remembers that the recent exercises of the Russian army focused on urban conflict and guerrilla warfare. She also recalls that the NGO monument, which had extensively documented the crimes committed in Chechnya, was lifted shortly before this invasion. “A screenplay is therefore being written.”

General François Chauvancy wonders about the training of soldiers, because the law of war takes precedence in all circumstances – including orders of the hierarchy. “In Western militaries, disciplinary regulations mandate disobeying orders when they are illegal – shooting civilians, for example. I’m not sure if this training is fully provided to Russian soldiers.” According to him, it would also be instructive to know the nature of the representations of the Ukrainian population that have been “stab in the heads of Russian soldiers” and that can influence their behavior in the field. Especially since the Moscow story has evolved precisely since the beginning of the war.

According to the Kremlin, Russian troops had to liberate the population at the beginning of the war by “nationalists” and “Nazis” flow. Ukrainians were seen “Like some kind of Russians with bizarre ideas about their identity and a ridiculous language”† Overview Russian sociologist Grigory Yudin. Maize “this view failed when the Ukrainians began to bravely resist”, continues this researcher against the war. Rooted in its ideological representations, the Kremlin drew its own conclusions and decreed that: “Ukrainians [étaient] deeply infected by Nazism”† Since it is a matter of confronting absolute evil, Grigoryi Ioudin concludes, a logic of “Purification” replaced the original logic of “release”†

In addition, the Russian media has made their shift to the new doxa. †‘Ukronazism’ poses a far greater threat to the world and to Russia than Hitler’s version of German Nazism.”ventures the Russian polemicist Timofey Sergeyitsev – very little known – in an article published by the bureau Ria Novosti† Propagandist Vladimir Solovyov also beats the drum in his daily show on the channel Rossiya 1. “nothing prevents us from burning the whole world to ashes” and “to negotiate with the Nazis, you have to put your foot on their throat”†

This Kremlin semantics “galvanized army command and ghosts, paving the way for an attempt at ‘de-Ukrainization'” of the country, adds Carole Grimaud Potter. “What happened in Boutcha is not an isolated incident and I am very afraid of what we will discover in Mariupol or Kharkhiv.” But at the same time, Admiral Michel Olhagaray notes, “You don’t find as many corpses on the streets of Bodoryanka as you do in Boutcha. The Russian army responded and I think they did a ‘clean up’, which has less of an impact on international opinion.”