Home » of the victims can have consequences for the eyes 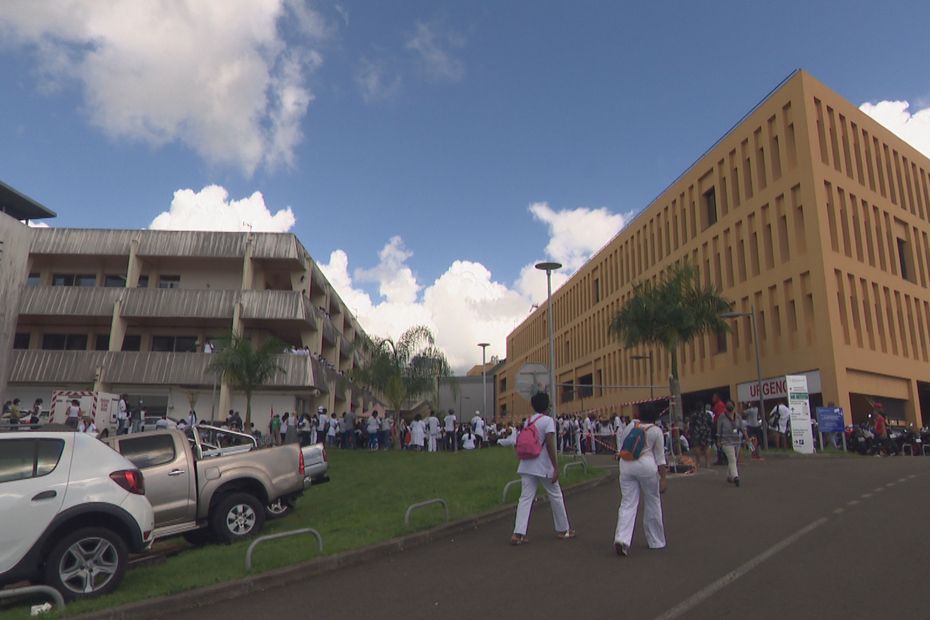 The convictions have continued since the attack on several people at the Pierre Zobda Quitman hospital in Fort-de-France on Thursday, March 24, 2022. They were victims of a “highly corrosive product” launched by protesters, on the sidelines of a meeting. between the new management and the union. The latter is still divided after this incident. Several complaints have been filed.

The facts took place on the sidelines of a meeting devoted to: “a renewed and constructive social dialogue” between the new general manager of the Center Hospitalier Universitaire de Martinique and the 5 trade unions of the establishment. Protesters trying †forcibly enter the room to disrupt the work session” according to Yvon Pacquit, Chairman of the CHUM Supervisory Board, have launched “a very corrosive product” on attendees, some of whom were hit in the eye.

6 of them had to be evacuated immediately and treated in the emergency room of the Pierre Zobda Quitman hospital, 3 of them very seriously injured, who underwent emergency surgery. “Despite the speed and quality of their care, it is feared that their visual acuity will change permanently” according to Yvon Pacquit.

These victims, who also have absolutely nothing to do with the internal problems of the CHU, could therefore retain a particularly serious permanent disability. The members of the Supervisory Board condemn and condemn this unspeakable act with me in the strongest terms. He marks an escalation of violence in the CHU, which we must resist by all means (…). Let everyone become aware of the very serious drift that is taking place.

This violent action comes on top of the various disagreements that have been observed within the union since the beginning of the mobilization against the health pass and the vaccination obligation. Jean-Pierre Jean-Louis, the secretary general of FO health, was one of the first to denounce this “certain methods”† Today he notices that†again, violence has taken precedence over dialogue”, in a social climate that “largely deteriorated within the CHUM”.

This violence will have a heavy impact on the lives of people like us who get up every morning to go to work and earn a salary to support their families. The Force Ouvrière Santé union cannot tolerate this kind of behaviour. We strongly condemn all forms of violence. We must accept differences of opinion and only dialogue will convince and find solutions acceptable to all.

“Let’s focus on our missions: caring for and treating our people who need us” adds Jean-Pierre Jean-Louis to his colleagues in his press release of 25 March.

On March 26, 2022, the Social Health CDMT, in turn, responded to this violent episode, and condemned “solidly produced the abuses within the walls of the establishment”.

CDMT Santé Sociaux, strong in its values, cannot approve any actions that could endanger the safety of persons working within the institution, but also of all users. The hospital must remain a haven where everyone can go safely and at any time. There is no way such acts can be repeated, whatever the battle, however legitimate it may be!

Olivier Villeronce, for the General Secretariat of the CDMT Santé Sociaux

The Centrale asks all parties involved in the operation of the hospital to: “to resume a constructive and peaceful dialogue”. The FO and the CDMT also assisted the victims.

The UGTM union, for its part, has a different reading of what it qualifies as “serious facts”, but he doesn’t denounce the aggression itself, but a… “large number of so-called security agents, deployed totally disproportionate to the situation”, which, according to the Union, “creates unnecessary tension for any CHUM agent” who needs to go to the services.

We condemn the attitude of the security officers after this attack. Some made threats and insults to members of the delegation. Another wanted to hit us with a chair (…). One of them pulled out a bladed weapon and threatened to remove his gun from his vehicle, after which he left for his car. These agents then regrouped as a militia to do battle. These facts are reprehensible (…). We admit that we have serious doubts about the quality and professionalism of these security guards who are employed by a service provider outside the CHUM, who, like hospital employees, should present a clean criminal record.

In addition to these accusations against the hospital service, the union continues by asking itself: “we have the serious impression that we have been ambushed sponsored by whom? for what purpose? to discredit the fight” †

In his “overview of promotions for the week of 21-03”posted to YouTube on March 26, 2022, UGTM health leader Serge Aribo brought the point home, without referring to the victims.

We are elected representatives of the staff, we are representatives of the inter-union. It is out of the question that we are “checked” in a public institution and that we have guards in front of us who are well paid and who tap their mobiles all day, sometimes falling asleep on the stairs (… ) , who believes are that they have discretion over our access. We are not respected and we believe that respect will only be gained if the Director General has proven that he is able to solve the problems we face today: continuity of care, respect for the state’s commitments to continue the negotiations and ensure that the mistreatment of the staff that leads to the mistreatment of the people who are received in our sites stops (…). The new director is signing suspension letters so it’s a continuity and we can’t imagine he came to settle down. He has to stop.

In another laconic communication of March 26 “The CGTM Santé denounces, wherever it comes from, this act committed in the hospital”, by the voice of its general secretary, Magalie Zamor. However, the latter specifies that its organization “has not approved, validated, nor signed the statement of the inter-syndical of March 25, 2022”.

Meanwhile, new political statements condemned the acts, which the UGTM did not appreciate as the elected officials “made believe that the inter-union members would be affected by these attacks”, a lecture here again dissonant, in light of the position of the other organizations.

I strongly condemn the attacks on guards. Such acts are unacceptable and more than ever, in this particularly difficult health context, we need solidarity and dialogue.

It is unacceptable that security agents performing a public service task fall victim to such attacks. Violence and rudeness, all too often present for a few weeks around or in the premises of the CHU, are phenomena that do not justify any tolerance. I hope those responsible for these facts are found and severely punished.

These facts are a rare violence and testify to the climate of terror that certain people are trying to establish in CHUM and in Martinican society. The PPM condemns these attacks on people in the strongest terms. Nothing can justify such a drive. This harmful climate can only reinforce our dependence on the outside world for treatment, and we all know that the losers will always be the poorest and the most precarious.

Sébastien Lecornu, Minister for Overseas Territories and Olivier Véran, Minister for Solidarity and Health, also denounce a “cowardly and violent aggression” in a government press release published on March 25, 2022.

The ministers send their sincere wishes for recovery to the victims and, more broadly, their full support to the CHUM agents, who are regularly exposed to the violence of a minority whose demands cannot justify such acts.

A guide of 219 pages, devoted to exceptional health situations in health institutions, was published in 2019 by the Ministry. The goal is to“to support health facilities in the preparation and management of hospital stresses and SSEs (Exceptional Health Situations)”.

With regard to internal security, the part of which is important, the document states that: “The health facility must ensure the safety of people and property in its premises. This security concerns health personnel, patients, visitors and service providers.”

Each site is required to prepare a Site Security Plan (PSE), in consultation with the prefectural authorities and internal security services. This plan defines the overall policy and organization in place to secure the site. It should be integrated into the hospital tension management plan and SSEs (Exceptional Health Situations).

Ministry of Solidarity and Health

Every key player in this case has filed a complaint. BEE charge of justice to distinguish the true from the false. As for the health interunion, it is more divided than ever in Martinique.